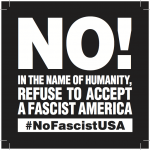 April 24  Think of this – 11 million people – immigrants in Trump’s America – have been placed squarely in the crosshairs of an escalating reign of terror. On April 24 – Holocaust Remembrance Day – Refuse Fascism led powerful and moving processions against this in four cities. And it was quite fitting that two top officials in Donald Trump’s cabinet responsible for whipping up an atmosphere of repression and intimidation of immigrants, John Kelly and Jeff Sessions, were ironically “honored” for their “leadership in the field of Detention and Deportation of ‘undesirables’”. Kelly was given the “Adolph Eichmann Award”; Sessions the “Joseph Goebbels Award”. Eichmann and Goebbels were two of the top leaders of the Nazi Regime in Hitler’s Germany, responsible for involvement in the deportation, confinement, and murders of millions of Jews.    (Read New York Report here)

Kelly has said he would “do almost anything to deter the people from Central America …” from coming into the U.S”. He boasted that ““Everybody in the country illegally is subject to being deported.” He said this specifically about teenagers and young adults – the “Dreamers” – who crossed the border as children. In Nogales, Arizona, this month, Sessions made the Trump Regime’s threat clear: “This is a new era. This is the Trump era. The lawlessness, the abdication of the duty to enforce our immigration laws, and the catch and release practices of old are over”. This is also an era in which all people who want to live in a just world must work together to end these attacks, and drive this regime from power.

Important actions were also held in several cities across the country.

In the Name of Humanity, We Refuse to Accept a Fascist America.

Drive Out the Trump/Pence Regime!”

Statements from Holocaust Survivors and their Descendants

Cowardly Silence in Service of Genocide

Submitted by grandson of Otto Myerhof, 1922 Nobel prize winner for medicine, who escaped Germany and survived the Holocaust.

Distinguishing between Germans and Nazis …. is in itself a propaganda lie. I know what all, or 90%, of the professors did in 1933 when their Jewish colleagues, whom they had themselves appointed, were deprived of their rights and made homeless — and the same thing occurred in all academic circles and at all levels in society, except in certain areas of the church: maintained their cowardly silence or even satisfaction, and not even 1% of the professors were party members. In the same fashion, broad sections of the population, though overall a somewhat smaller percentage, willingly served as slaves and helpers to the tyrants, even helping as torturers and executioners.

It doesn’t help that a powerless minority kept their hands clean, or that hundreds themselves became martyrs through the strength of their convictions, if hundreds of thousands turned into murderers. It would have been physically impossible for five million Jews, 80-90% of all Jews in the countries that Germany occupied — 10 million Russian, Polish, Serbian and other civilians — to be killed by a few Nazi criminals: hundreds of thousands were necessary for this. A people without any sense of morality were behind these mass murders….”

This quotation further explains why we say this is critical: Because you care about the future of this planet and you know that in these times the gravest problem is silence:

“In the Name of Humanity, REFUSE To Accept a Fascist America.”

Drive Out the Trump/Pence Regime

To all Holocaust survivors; their families, relatives and friends; and those who deplore the thought of any future Holocausts or genocide against any peoples anywhere;

To people everywhere who stand with the Muslims, the Mexicans, the refugees, the immigrants from everywhere that have been vilified and targeted by the Trump/Pence regime in ways that echo the demonization of Jews and other groups in Nazi Germany;

To all those people who detest white supremacy, misogyny, homophobia, or xenophobia and do not want to see a repeat of “make Germany whole again”;

To all those people who despise and fear the Trump regime and want to see it driven out;

Join Processions across the country on April 24, Holocaust Remembrance Day, from Holocaust Museums and Memorials to ICE immigration detention centers.

Monday April 24, 3 pm: Procession from Holocaust Memorial Museum 36 Battery Place to the ICE detention Court, 201 Varick Street. Some dressed in the clothing of the concentration camp prisoners, some in orange jump suits representing those people forced into detention centers and being deported, we will present Homeland Security head John Kelly with the Adolf ICEman Award. (after Adolf Eichmann, who was in charge of the Nazi concentration camps.)

Join us in wearing the NO! Everywhere … on T-shirts, jackets, uniforms, hats…  In Germany, Jews were forced to wear the Yellow Star of David, political prisoners the red triangle, homosexuals the pink triangle, and all the other triangles.  We proudly choose to wear the NO! to symbolize opposition to the Trump/Pence regime and its efforts to brand any new group of people as ‘undesirable’.

Post the symbol of NO! Everywhere … on storefronts, school bags, synagogues, mosques, churches, lunch pails, billboards, newspaper stands, house windows, online… and link up with millions of people to express the need to DRIVE OUT the TRUMP REGIME before it is able to fully consolidate its fascist plan and normalize the attacks and wars on Muslims, immigrants, women, LGBTQ, people of color, and destruction of our planet.

After the Holocaust, millions said, “Never Again!”  If “Never Again!” Is going to continue to mean anything, it has to mean something now – when immigrants, Muslims, and people all over the world are being threatened by the Trump/Pence fascist regime in the most powerfully militarized country on earth.

Sign up for the Holocaust Remembrance Day procession in your area.

NO!  In the Name of Humanity, We Refuse to Accept a Fascist America