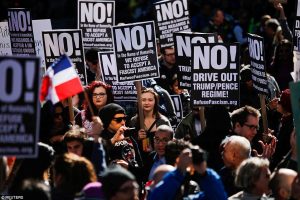 Fascism: It Can Happen Here… It IS Happening Here:
It’s Up to YOU to Stop It!

It’s June and the Trump/Pence Regime and its fascist shock-troops are doubling down, moving fast to lock in place a fascist America.

Obstacles, protests, and investigations have delayed some aspects of their fascist program, but they are not deterred – rather, they are moving aggressively to bludgeon and eliminate all opposition.  Their sharpening of the struggle must be met by even greater resistance.  We must shed illusions that this regime will just go away. This summer our resistance must grow to the point where we drive this regime from power.

The Trump/Pence Regime is ramping up harsh repressive measures against immigrants, inner city youth, and against the right to dissent.  They’re pushing a budget of starvation and impoverishment.  They pulled out of the Paris Agreement, ratcheting up the destruction of our planet. Their hard core social base is unleashed — holding KKK/Nazi-style rallies, assaulting journalists, threatening lynching, and actually murdering two men who stood up to them in Portland, Oregon.  Fascists are targeting college campuses to spew racism and bigotry, and then demanding punishment against protesters.  A sinister network of “alt-right” fascist trolls is systematically doxxing (publishing home addresses and personal details) and threatening thousands of people who courageously signed the Refuse Fascism Call to Action as well as others who have stood up.

On May 26, Taliesin Myrddin Namkai Meche and Ricky John Best were murdered and Micah Fletcher was hospitalized after they stopped a Trump supporter from spewing racist, anti-Muslim racist hate at two teenage women.  These men were heroes! Live like them!

There is still time to stop a fascist America, but there is not a lot of time.  We must act with great urgency and determination to drive out the Trump/Pence Regime.  The future hangs in the balance.

Make this a Summer of Struggle to Stop Fascism and Drive Out the Trump/Pence Regime!

Everywhere members of the Regime show their faces, they must be dogged, exposed and protested.  Every new crime must be resisted. Fascist threats and rallies must be taken on.  Demand the web-hosts take down the pages of the fascist trolls doxxing people – if they don’t, sit in at their offices. If people are threatened, show up and have their backs.  If a journalist is assaulted, a racist threat issued, an abortion clinic harassed, an immigrant community raided – gather people and draw the line.  March on the offices of those responsible. Sit in. Disrupt. Don’t give the fascists a moment of peace.

Take this challenge, as well, into broad crowds of people wherever they gather – into concerts and street fairs, into operas and religious gatherings. Challenge everyone: WHICH SIDE ARE YOU ON?

Sign and spread the Call to Action from RefuseFascism.org and promote its main message everywhere: NO! In the Name of Humanity – We REFUSE to Accept a Fascist America!  Drive Out the Trump/Pence Regime.

Get organized! Join with the Refuse Fascism Summer of Struggle and work with all your creativity and determination toward the time when millions of people can be moved to fill the streets of cities and towns day after day and night after night, declaring this whole regime illegitimate – Demanding, and Not Stopping, Until the Trump/Pence Regime Is Driven from Power.

Do this not just for ourselves, but in the name of humanity.