June 6    We received this report from Refuse Fascism, Southern California   On June 3 at the U.S.-Mexico border, the Dresden Symphony Orchestra (Dresdner Sinfoniker) held “Tear Down This Wall!”—an open air concert in Tijuana, Mexico, right up against the border fence separating the two countries.

Markus Rindt, the artistic director of the Dresden Symphony Orchestra, said of the Tear Down This Wall! project: “This is against nationalism, against isolationism… we are one planet, and there have to be possibilities for the future other than building walls everywhere, higher and higher and higher.” Trump’s plan to build a wall on the whole U.S.-Mexico border inspired this project from the Dresden Symphony Orchestra. The Dresdner Sinfoniker is an ensemble that draws musicians from a number of different European orchestras. They are known for performing contemporary music that deliverers a social message, and for initiating controversial projects.

Originally, Tear Down This Wall! was conceived as a bi-national event to include artists from around the world. The event would take place in “Friendship Park”—on both sides of the border fence, simultaneously. However, U.S. Homeland Security and U.S. Border Patrol denied permits to the Symphony. Undeterred, Rindt and the Symphony put together a major concert on the Mexico side, featuring artists from the U.S. and Mexico and Europe and several other countries.

And the Symphony also called for people on either side of the border, on June 3, to stage simultaneous performances “like a huge flash mob…to sing and to speak and to dance and play games.” The call went out from the Symphony: “Join us with your initiative! Take a stand against policies of isolation and fanaticism. Anything goes: recite a poem, sing a song in front of a wall or just stick a flower into a fence… Share your action on social media on June 3 using the hashtag #teardownthiswall (the Symphony will be curating a montage of all that occurred in the near future).”

When we heard about Tear Down This Wall! those of us with Refuse Fascism in Southern California figured out the ways we could contribute. We thought: This is great! What an inspiring project! As soon as we sent our inquiries to the Dresden Symphony Orchestra, people with the Symphony got back to us right away. We shared with them Refuse Fascism’s Call to Action and encouraged them to read it, to spread it everywhere, and we met with them to discuss this great project of theirs, and Refuse Fascism’s Call. In Mexico there was a lot of media attention leading into Tear Down This Wall! but not so much on the U.S. side. So, we made suggestions for how to connect up with some media on the U.S. side, including The Michael Slate Show on Pacifica Radio. And we spread word to all of Refuse Fascism’s contacts in San Diego.

A group of us went to the U.S.-Mexico border June 3 to be part of this effort. When we got to the most southwesterly corner of the U.S., at the Pacific Ocean, we heard the Dresden Symphony Orchestra. We could hear enough and see all kinds of people on the Mexico side to take in the beauty of what was occurring.

In contrast, on the U.S. side, about 15 pro-Trump fascists used megaphones, loud sirens, and recordings of helicopters to attempt to disrupt the festival. These pro-Trump fascists were spewing racist, “America First” venom. On one side, in Tijuana, art, beauty and a lofty vision of a world without borders… and on the U.S. side sheer ugliness—fascist foot soldiers with their pro-Trump banners and flags and racist taunts. 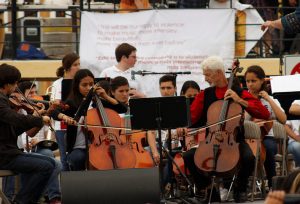 When we pulled out our “NO! Stop Trump/Pence Fascist Regime” banners in English, Spanish, Farsi and Arabic, a crowd gathered on the Mexico side of the fence. We also pulled out the banner “No Human Being Is Illegal.” People on the Mexico side pointed to us, came to the fence, took pictures, and voiced support. They waved to us with peace signs, and heart (love) signs. They yelled out,”nosotros amigos” (we are friends). One of the Refuse Fascism volunteers said, “We love you.” In English we heard, “We are friends, not enemies.” Then we’d chant “No Trump, No KKK, No Fascist USA” and “No Wall, No Deportations, No Fascist USA.” On the sand at the beach we read other support statements: “Musica No Tiene Fronteras” (Music Has No Borders) and “thank you, Dresden, Germany.”

As one of the Refuse Fascism volunteers put it, “It was so touching to see their support, important to show the people at the festival we are opposed to Trump and stand with the people against him and his fascist regime…and, it was really cool to see a tweet from the other side with us in the photo!”

International media covered the “Tear Down This Wall!” event—from Russia, Japan, China and other countries. Refuse Fascism was interviewed by NBC News. It was also covered by Spanish-language TV and an important news channel in Germany.