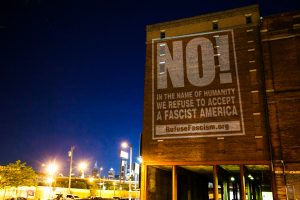 To my friends, family and colleagues:

It doesn’t matter. Whatever you’re telling yourself, whatever is stopping you from joining the resistance, from marching and protesting, day in, day out – whatever it is, you’re wrong. We’re losing. Every day, the Trump/Pence regime makes further progress in realizing their vision of a hideously unjust and unequal society, a cruel, racist, hateful, poisonous nightmare. And much of this process is happening behind the scenes, while we’re distracted by the latest mind-boggling episode of treason and twitter.

Understand: even if we could get them out tomorrow, it would take years to repair the damage they’ve done already. We’ll be living with the consequences of this disaster for decades. And the longer they stay in power, the worse it will get, the more irreparable the harm: to vulnerable populations, to the possibility for peace, to the environment, to all of our aspirations for a better world.

We can’t let this happen. They have to be stopped. And they won’t be stopped unless all of us join the struggle. No one’s going to do it for us. It is possible, but it’s not going to be easy, and there’s no guarantee of success. But we have to try. And waiting will only make the task that much more difficult, as the regime consolidates its power.

In my opinion, the single best thing you can do to stop this madness is to join up with Refuse Fascism.  Refuse Fascism was responsible for the full-page NO! ads in the NY Times and the Washington Post that preceded Trump’s inauguration. Their analysis of our current situation has been eerily prescient, and they were the only group that foresaw the speed with which the Trump/Pence regime has been dismantling the very foundations of our democracy. Refuse Fascism exists for one purpose and for one purpose only: to drive the Trump/Pence regime from power. I particularly appreciate the way Refuse Fascism has always emphasized the need for creative resistance. So we need you; we need your ideas, creativity and energy. Do it now: visit the web site, sign the Call to Action, attend a meeting of your local chapter, volunteer, donate generously, march with us, and spread the word: NO! NO to a fascist America!

In love and solidarity,