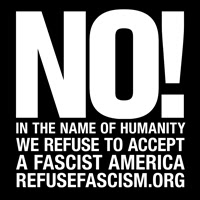 The National Rifle Association (NRA) recently put out two lurid and inflammatory videos. The first essentially called on the followers of the NRA, and Trump supporters generally, to attack those who are dissenting, protesting and resisting the imposition of this regime’s draconian measures. When some people protested this, they released a second video which continued in this same vein and raised the stakes by naming, and attacking, Tamika Mallory of the Women’s March, DeRay McKesson of Campaign Zero, Lieutenant Governor Gavin Newsome of California, and Senator Chris Murphy from Connecticut.

The mobilizing of the minions and trolls of this regime to go after specific individuals is not only chilling but could directly endanger those individuals. Particularly in the case of Tamika Mallory and DeRay McKesson – African-American activists who are explicitly attacked for their associations with important movements for social justice – this is extremely chilling and must be opposed, especially given the history and current-day reality both of the US in general and the particular persons wielding power in this regime. This is also true for Linda Sarsour, a Palestinian-American Muslim activist who has also come under vicious attack from the extreme right. The warning of Pastor Martin Niemoller in Germany — that “first they came for the Communists and I did nothing, for I was not a communist, then they came for the Jews, but I did nothing for I was not a Jew…” and so on down the line – must be taken to heart and the grievous mistake that he criticizes must not be repeated in today’s circumstances.

We state our solidarity with those who have been singled out and declare as loudly as we can, “NOT this time, fascists.” 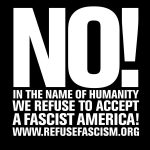