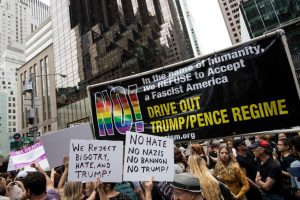 Don’t allow the ruling forces, or any other forces, to divide us or pit us against each other.  Don’t fall for “divide and conquer” schemes and divisive actions, reject and rise above petty disputes and sectarian squabbles – reach out BROADLY to UNITE ALL WHO CAN BE UNITED, from different perspectives and viewpoints, around the great unifying objective of driving out, through massive, sustained political mobilization, this regime which has already done such great harm and which poses a grave threat to humanity. This Nightmare Must End: The Trump/Pence Regime Must Go!