Sunday, September 24, UC Berkeley. Yesterday, the Berkeley Patriot student group announced it has had to call off its plans for bringing a parade of fascist monsters—from Steven Bannon and David Horowitz to Ann Coulter and Pamela Geller—to the UC Berkeley campus. But today showed that the fascists are still intent on assaulting the universities to legitimize racism, misogyny, and America first xenophobia and normalize fascism.

Milo Yiannopoulos and a crowd of his fascist supporters showed up this morning on Sproul Plaza to spew their fascist poison in the name of free speech. Again, the fascists had the collaboration if not outright support of the police, and the administration, who set up barricades around and through Sproul Plaza, lined it with dozens of riot police to make sure Yiannopoulos could speak, and then escorted Yiannopoulos in—this for an unsponsored unsanctioned event that he simply declared on Facebook yesterday!

But Milo and his fascist minions were met with resistance, led by Refuse Fascism and the group BAMN (By Any Means Necessary). Before Milo got to the Sproul, the police started letting people into the plaza. Sunsara Taylor and several other members of Refuse Fascism immediately stood right in front the barricade in front of the steps, held up big Refuse Fascism posters and began chanting, “No Trump, No KKK, No Fascist USA!” Outrageously, the pigs singled out Taylor, saying, “You’re ejected.” She linked arms with two others, refusing to move and calling out the line of riot cops marching towards her and the white supremacy and fascism they were protecting. The police grabbed her and the others, violently forcing them to the ground, brutalizing them, and then dragged Sunsara Taylor and Rafael Kadaris out of the plaza. So apparently it’s free speech for fascists while shutting down anti-fascist resistance week. The third member of Refuse Fascism, Xochitl Johnson, refused to budge even as the police tore the others away, so when Milo was escorted onto the plaza by a phalanx of police, she was still there. She shouted repeatedly through his entire truncated appearance right in his face, “No Trump, No KKK, No Fascist USA!” and a beautiful image of Xochitl flipping him off spread around the internet! After a short appearance he left, and later issued a statement lying that protesters jumped over the barricade and threatened him. 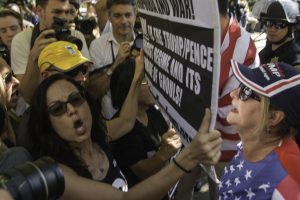 But in many ways Milo’s departure was just the beginning. For the next two plus hours there were tense standoffs and exchanges between roughly 100 to 125 people protesting fascism and Milo, and a roughly equal number of organized fascist thugs—from all across California—and their supporters and hangers on. Those who came out and stood up—and there should have been many more—courageously and heroically stood their ground in the face of fascist harassment, threats, videotaping, and attempts at intimidation.

After intense back and forth at Telegraph and Bancroft, Refuse Fascism called people together to march through the streets. Over 100 did, trailed and sometimes infiltrated by fascists. Whenever it looked like an individual fight or provocation was going to happen, the police just bum rushed through the crowd of righteous protesters, knocking people down, and at some points splitting the march. But the marchers held firm, marching for well over an hour through the streets around Telegraph Avenue and past and through the dorms, calling on the students to join. Even afterward, groups of fascists were hanging around Berkeley looking to threaten people. At a couple of points 20 or so came to Revolution Books, banging on the windows, threatening the bookstore. Again, people held firm and would not be intimidated and would not let them in—in fact, this just underscored that these goons were there for fascism—not “free speech.”

It was extremely important that Refuse Fascism and others came out and confronted Milo. This was not a publicity stunt. This was part of a deadly serious fascist assault on the universities and it’s not over. Various events are being planned on the campus in the coming week—protests against hate, teach-ins of various kinds where Refuse Fascism is going to be struggling with people on the campus, faculty and students over the fact that what is happening is not a battle over different interpretations of “free speech,” it’s a fascist assault and part of a whole drive by a fascist regime to consolidate power. And the urgency of driving this regime from power beginning November 4, and of putting first and foremost the enormous threat this fascist regime poses for all humanity, not our individual safety, or having a peaceful, secure campus environment as far too many administrators and faculty are telling them.