by Sunsara Taylor | Reprinted from Revolution 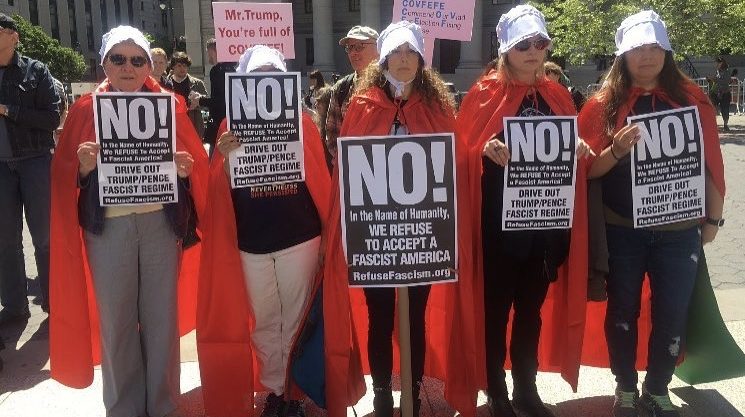 UPDATE 6/26/18: Today the SCOTUS ruled in favor of the fake abortion clinics. The following was written before the ruling, but provides valuable analysis of the significance of this ruling.

A decision is expected soon from the U.S. Supreme Court on a challenge to a 2015 California law that requires anti-abortion fake clinics (so-called “Crisis Pregnancy Centers”) to disclose that they are not medically certified. The law also requires all licensed clinics that provide ultrasounds, pregnancy tests, and advice on birth control to post information about affordable abortion and contraception services offered by the state. The Supreme Court case, called NIFLA vs. Becerra, is the result of a challenge from the National Institute of Family and Life Advocates, who claim that the government is violating their “right to free speech” by requiring them to promote medical services they do not approve of, namely abortion.

Here are five things you need to know about this case and the overall attack on abortion it is part of.

1. Fake Clinics Exist to Coerce Women and Girls to Bear Children Against Their Will

There are close to 4,000 fake clinics (so-called “Pregnancy Crisis Centers”) around the country. There are only 780 real abortion providers!

These fake clinics have been set up with only one purpose: to lure vulnerable women and girls for whom pregnancy is a “crisis” into what appears to be a supportive medical clinic, only to be plied with coercive anti-abortion shaming—and very frequently bald-faced LIES—aimed at pressuring them to bear children against their will. They do this even if the women come in looking for an abortion, even if they are in abusive relationships, even if they have no ability to support a child and don’t want one. These “clinics” are completely illegitimate, predatory, and ought to be shut down.

2. Being Prevented From Systematically LYING to Women to Deprive Them of a Basic and Fundamental Right Is NOT a Violation of “Free Speech”

Just as it is not a violation of the First Amendment for the government to regulate the labels on food products or what a lawyer must tell a client about their rights, it is not a violation for the government to regulate information provided by “Crisis Pregnancy Centers.” These regulations are not restrictions on speech, because they are required for the protection of the rights of the people being spoken to.

The right of women to decide for themselves when and whether to bear children is at the core of whether women are considered fully human. Without reproductive freedom, women cannot enter freely and fully into all realms of society.

3. This Lawsuit Is Just the Tip of a Theocratic Fascist Remaking of All of Society

This lawsuit is just the latest of a growing tsunami of Christian fascist assaults seeking—and succeeding in—twisting the law into an instrument of a Dark Ages theocracy. As revealed by Katherine Stewart in a recent New York Times op-ed, there are now “more than 70 bills before state legislatures” as part of a nationwide legal blitz by extreme Christian nationalists. Meanwhile, Trump has appointed a record number of federal judges. One of Trump’s judicial nominees said trans children are part of “Satan’s plan.” A judge Trump appointed compared abortion to slavery. Many reject the science of climate change. One championed laws that were later overturned for suppressing the African American vote with “surgical precision.” This means that the federal courts that hear this tsunami of legal challenges will be even more hostile than what exists now to women, LGBTQ people, Black people, science, and to the separation of church and state.

4. There Is No Legislative Path to Stopping This Juggernaut—The Regime Must Be Driven From Power

The 2015 California law that requires fake clinics to disclose their lack of medical licenses is part of a relatively new strategy among the pro-choice movement to pass legislation aimed at protecting the rights of women.

But while these laws are just, the larger picture is clear: abortion continues to be increasingly more difficult to access, more dangerous to provide, and more stigmatized than ever. Clinics are being forced to close. Women are being forced to go to desperate measures to secure abortions—often traveling hundreds of miles, going deep into debt, enduring sexual degradation to come up with the funds, losing their jobs, and more. Many are simply being forced to have children against their will. Meanwhile, Christian fascists are using every branch of government to lock into place a Dark Ages theocracy that chokes off what few rights remain.

Only through massive and sustained political struggle that steps outside the bounds of politics-as-usual and reverses this whole direction can this assault be stopped. Right now, this means joining with RefuseFascism.org in getting prepared to launch the kind of sustained massive nonviolent movement of protests that can drive the whole fascist Trump/Pence regime from power.

5. We Do NOT Need to Live This Way—We Need to Get Organized for an Actual Revolution!

A system that puts the lives of half of humanity up for debate, a system that legislates and mandates Dark Ages ignorance and enslavement, a system that has brought forward the vile misogyny and disdain for humanity that is concentrated in the Trump/Pence regime, a system that sanctions all this with so-called “legitimacy” of its laws and its courts is a completely illegitimate system. It is also completely unnecessary. The very fact that these filthy fundamentalist predators have to peddle LIES and shame women and hound abortion providers and the rest reveals that oppression of women is something that must be enforced—and this system will keep on enforcing it until it is overthrown and cleared away and replaced by a radically new system.

A blueprint for this new, and much better, system is embodied in the Constitution for the New Socialist Republic in North America, authored by Bob Avakian, the architect of the new communism. This new economic system, the new social relations it will foster, and the whole new legal and political system that will guide it will be a revolutionary framework that not only guarantees women’s full reproductive freedom starting Day 1, but goes to work at digging up the roots of all forms of misogyny and patriarchy as a key part of emancipating all of humanity all over the world. This is what all those who hate what is being hammered down by these fascists need to join with and make real.