Donate to cover the expenses of sending Refuse Fascism to D.C. |

On August 12, thousands of people rallied and marched in Washington, D.C., determined that the fascists who murdered Heather Heyer, an anti-fascist protester in Charlottesville, Virginia last year could not parade their racist terrorist hate in front of the White House while an overt white supermacist rules from inside the White House. They came from all walks of life, from many points of view, from all over D.C. and up an down the East Coast and Midwest. They had the courage to take a stand despite real risks. The world saw the fascists get surrounded, shut down, and forced to hide behind hundreds of police.

The protest against the fascists in D.C. came a day after courageous students at the University of Virginia, and people in the Charlottesville community defied outrageous police repression to celebrate the life of Heather Heyer and to stand with the struggle she gave her life for.

The call from Refuse Fascism for people to confront these fascists said in part:

These Nazis were anointed by Trump as “fine people”; fulfilling the vision he articulated on the campaign trail when he longed for the days of when protesters were “carried out on stretcher[s].”One year ago, white supremacists and neo-Nazis marched with torches in Charlottesville, VA, savagely beating people, and chanting “Blood & Soil!” and “Hail Trump!” This modern day lynch-mob culminated in the murder of Heather Heyer, when a white supremacist drove a car into a group of protesters.

Trump’s “fine people” are enforcers of an America fascism rooted in white supremacy, misogyny and xenophobia wrapped in the America flag with the Bible taken literally. Fascism rules by organized repression and terror by the government and by the mob. The Trump/Pence Regime is using the state to terrorize immigrants and cage children, to assail the media, to ban Muslims. They have instructed police to take the gloves off further killing and brutalizing people of color. Recently won LGBTQ rights are under assault. Women are poised to lose the right to abortion and even birth control.

The Trump/Pence regime if left in power will effect a thoroughly reactionary restructuring of society. Nothing short of removing this entire regime will stop this nightmare. (From the Refuse Fascism Call to Action)

Now we need to move forward to politically drive out the white supremacists in the White House. Spread the word – #TrumpPenceMustGo. Join us. DONATE to help make it happen here.

Below: some photos and videos that give a feel for the day, and the work of Refuse Fascism — mobilizing people to stop the fascists, and organizing people into a movement to drive out the Trump/Pence Regime in the name of humanity.

Thousands rallied at Freedom Plaza in DC and Elsewhere, and Joined to March on Lafayette Square to Confront, Surround, and Drown Out Nazis

On August 14, Revolution Books in New York City and the Revolution Club presented a report-back from D.C. and Refuse Fascism was part of the panel. Watch this video to get a unique feel for what happened from people on the front lines, and wrestle with what humanity confronts with the Trump/Pence regime, and what to do about it in the wake of this powerful protest. Below: 1) Emma from Refuse Fascism participating in the event; 2) the full event. 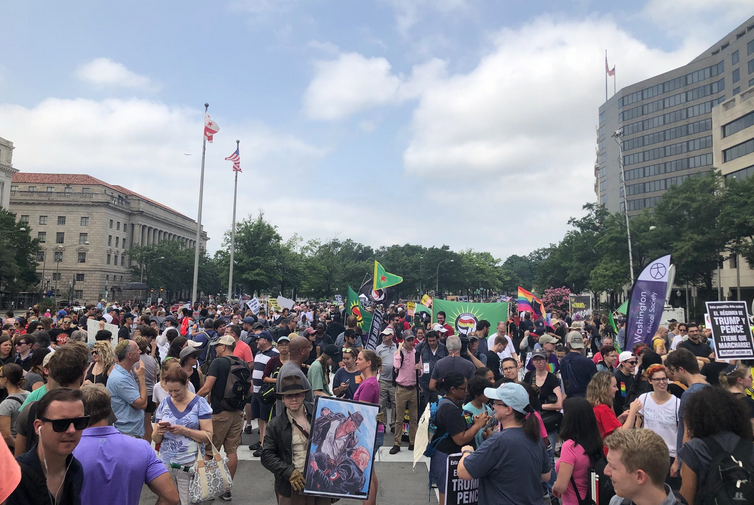 #UTR2 #AllOutDC: Refuse Fascism are one of the first groups to arrive at Freedom Plaza. ~50 strong, they just moved in with their characteristic chant – “in the name of humanity, we refuse a fascist America.” pic.twitter.com/0Rs1HBvNbF

In front of the White House Saturday evening

My ancestors built this White House… I will not accept a fascist America!#UTR2 #AllOutDC pic.twitter.com/5KO54U3tz6

Our in front of the White House getting ready to protest #UTR2 tomorrow. pic.twitter.com/ZACHQFYY6C

We love this kid. pic.twitter.com/F1Ke7htvzZ

Refuse Fascism Mobilizing People in the Communities of D.C. Before the March

At Eastern Market in DC… Join with us Sunday, Aug 12 at Freedom Plaza to stand against the neo-Nazis who will be celebrating the death of Heather Heyer and Charlottesville

Diversity is what makes America great… Come say no to white supremacy tomorrow in DC.#AllOutDC pic.twitter.com/wDyw5nNYoW

Revolution Club in DC: Puncturing the air… challenging people to come out on Sunday

Refuse Fascism in DC: People cannot sit on the sidelines

These Nazis who murdered #HeatherHeyer are fulfilling Trump’s white supremacist, “I long for the days when protesters were dragged out on stretchers” campaign promises.
WE MUST SAY NO!#AllOutDC pic.twitter.com/Ud0UVHxW63

We were in Charlottesville last year & are now headed to DC to protest Trump’s fascist white supremacists thugs. Join us because This Nightmare Must End! The Trump-Pence Regime Must GO! #AllOutDC #TrumpPenceMustGo https://t.co/lXh6G2JAXt pic.twitter.com/aQnEYCl4JQ