February 5: Refuse Fascism Protests the State of the Union Address
IN THE NAME OF HUMANITY, THE TRUMP/PENCE REGIME MUST GO!

Outside of Trump Tower in #NYC tonight. Our response to #SOTU?
The Trump/Pence Regime Must Go! pic.twitter.com/U0FGXIQtHD

Out in front of Trump Tower. @emmancipator says

“Both the Democrats & Republicans have the blood of immigrants on their hands.”#SOTU19 pic.twitter.com/FJ9grgSW3x

Drexel students getting stickers and signs for their dorms and their immigrant parents! #SOTU #TrumpPenceMustGo @refusefascismPH pic.twitter.com/0vsFC8gjDG

ATLANTA SAYS:
To The World’s Migrants and All of Humanity: We REFUSE To Accept a Fascist America! The Trump/Pence Regime Must Go! #RefuseAndReject pic.twitter.com/NmIjlrEwtT 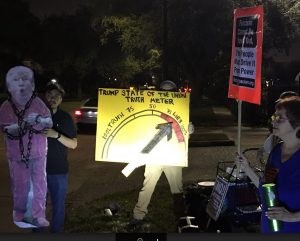 Houston: With pots and pan, whistles and rattles, a small group of people made a lot of noise protesting the state of the union outside the local ABC tv station in Houston.  As Trump’s speech was being played in the background, an almost continual chant was:  Humanity First (in response to all the “USA” chanting by Republicans and Democrats, and all the America first bullshit from Trump).  Different people tore apart what Trump was saying and how it is up to us to organize others to drive out the Trump/Pence regime. Someone had brought a truth meter sign, and its needle was stuck on lies the whole time.  We ended with the pledge from Refuse Fascism’s call to action.

On the Night of Trump’s State of the Union Address Refuse Fascism was in the Streets With the Message: To the World’s  Migrants and All of Humanity, We REFUSE to Accept a Fascist America!

State of the Union? How about the state of HUMANITY!? Enough of Trump and his fascist regime’s assaults on our lives, here and around the world.  Enough of Trump’s reign of terror and the escalating damage inflicted on the interconnected ecosystems of this planet.

On Tuesday February 5: Don’t sit watching by yourself, disgusted and outraged!
Bounce from your home… and…flood the street corners in cities large and small to demand:  To The World’s Migrants and All of Humanity: We REFUSE To Accept a Fascist America!  The Trump/Pence Regime Must Go!  No to Trump’s Fascist Wall and their program of ethnic cleansing — NO TO ALL ATTACKS on immigrants, refugees and asylum seekers – a lynchpin and a battering ram of the Trump/Pence Regime’s entire fascist program also targeting women, LGBTQ, the Black masses, people all over the world, science and the earth itself.

And… Enough of the Democratic Party’s complicity on “border security,” family separation and asylum seekers. High tech drones, sensors, satellites, enhanced fencing and more border patrol agents is their plan for keeping immigrants out.  We also must reject this plan, since it also leads to atrocities and is complicit with Trump’s program of ethnic cleansing.  We need sustained, nationwide protests and a society-wide struggle to remove the fascist Trump-Pence regime.  Making Trump’s State of the Union an evening of #RefuseandReject can contribute to this.

No more relying on saviors to oust a fascist regime and of passivity rooted in illusion, of failed predictions this fascist regime will self-implode any day or be swept aside by those at the top of this society.  No more of that!  Fascism can come to power through the ballot box but fascism cannot be voted out ~ the people must drive it from power.

And… enough already of the the numbing television news promoting these illusions ~ of ‘couch-lock’ (passivity and quiescence) and the complicity of millions and millions ~ as a fascist horror unfolds daily and the Trump/Pence regime rapidly transforms society and government into an open terroristic dictatorship.

On Tuesday before, during, and after the State of the Union, get onto street corners… let’s take history into our own hands.   Let’s drown them out and powerfully snatch the spotlight, with a massive and loud refusal and rejection of the entire fascist direction of this society and this world.

In the name of humanity, THIS IS A CALL for a night of Refusal and Rejection of a Fascist America during Trump’s State of the Union.

On the night of Trump’s State of the Union, at 9:00 pm Eastern/8:00 pm Central/7:00 pm Mountain/6:00 pm Pacific Time: Get your friends, colleagues and neighbors together and lets get the hell onto the streets, in two’s three’s twenty’s and hundreds, with posters, banners, projections, noise-makers (pots and pans and musical instruments…) expressing our REFUSAL to Accept a Fascist America.

Most importantly… let this night of Refusal and Rejection contribute to the time, in the not too distant future, when tens of thousands, in cities large and small, won’t just protest for a day, or one night, but will come back out, day after day and night after night, growing our protest from thousands to millions, to the achieve the single, unifying objective of driving out the fascist Trump/Pence regime.  The people of the world are counting on us.