She was brutally arrested at UC Berkeley for calling Ann Coulter a Nazi. Then held in jail overnight on $60,000 bail & had to pay $3000 to get out. Now she’s being charged & facing 3 years in jail!

She IS a fucking Nazi!

Drive these fascists off campus &
OUT OF THE White House.

Big shout out to @SFRefuseFascism and @followbamn, and all the Cal students who stood up to Ann Coulter last night!

This protest kicked a big hole in the wall of complacency & complicity in the face of fascism. Now’s the time to get in the streets & demand: Trump/Pence #OutNow! pic.twitter.com/8hyJyn4kmX

Alex at the Golden Bear: you can’t stay in your dorms… Come out against Ann Coulter, 7 pm at Sather Gate. #OutNow #NotAgainSU #NoAnnCoulteratCal pic.twitter.com/c0eKWsatdk

This is not about “free speech.” This is about fascism. And there is a body count. From El Paso to the 100,000 CHILDREN in immigration detention. And they are preparing for much worse.

Students: Which side are you on? 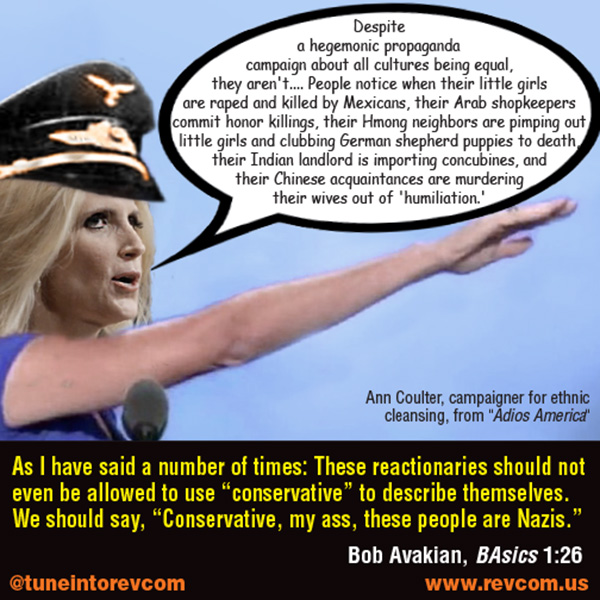 By Atlas Winfrey, member of the National Tour to Get Organized for an Actual Revolution and Refuse Fascism, LA

11/23: This correspondence, which was a quick snapshot and reflection, has been slightly modified by its author to fill out certain aspects.

When I walked onto campus at UC Berkeley last Wednesday it was a surreal experience. I walk through this campus with this incredible history and connection to the upsurge of the 1960s. I walk by different Christian fundamentalists agitating about godless liberals suppressing religious freedom. I walk by outdoor bulletin boards plastered with calls to support the Hong Kong protests. Giant graphics of the Hong Kong protesters in masks, umbrellas, in pitched battles in the streets and “Fuck you fascists” posters stapled all over. I walk by a cappella groups doing performances in Sproul plaza and groups planning bonfires and students cramming for tests.

Myself and some other members of the Revolution Club and Refuse Fascism walked up to cafes and made announcements about Ann Coulter coming to campus, and then engaged students over the Nazi rally that would be held on campus later that night. A Revolution Club member read quotes from Coulter, he pulled the lens back for people on why Coulter was coming here. “They are whipping up a Nazi youth movement on campuses across the country. They are preparing a social base to defend the fascist Trump/Pence regime and push, to carry out atrocities, even to launch a civil war.”

This spoke to questions so many had, that came up again and again: “Why is Coulter even coming to Berkeley” many people asked. Others said, “Don’t the Republicans have free speech too? Isn’t it wrong to protest them?” Many said, “She just wants to be inflammatory, and get self promotion by being really ‘out there,’ isn’t the best thing to do is to just ignore her?”  We asked some if they were coming to the protest tonight and some said, “Absolutely,” many others raised homework, prior commitments, too last minute, and other things like that.

I could not have predicted how people would respond later that night. We arrived at the protest at 7:00 and by 7:30 there were already hundreds pouring in eventually growing to a couple thousand demonstrating for three straight hours. Signs that said, “Fuck you fascists,” “Illegal immigration started in 1492,” “No Racism @ UCB,“ “Fuck White Supremacy,” and others that had really creative and inside jokes about Coulter. Many covered themselves in Trump/Pence #OutNow stickers and held #OUTNOW posters.

A few people who I saw at the protest were people who told us earlier that they weren’t going to come. Earlier in the day people seemed confused on the question of speech and the role of Coulter, but at the protest there was all this fierce certitude that Coulter is using the argument of free speech to cover over her Nazi fascist program.  People I talked to earlier in the day were confused over her role and why she was coming, but here everyone is talking about how she is fighting for ethnic cleansing. That her speech was dangerous and harmful. Some were connecting her views up with the policies emanating from the White House.

There was all this controversy earlier over whether or not it was even right to protest, and then later I see hundreds and hundreds link arms creating human chains to block people who were trying to get into Coulter’s speech. People were disciplined and nonviolent even in the face of many provocations and assaults.

On the spot we united with an organization called BAMN (By Any Means Necessary) that had also been organizing to prevent Coulter from speaking. They organized the students to picket the front. They were raising the slogan “Trump Must Go.” Together, between the agitation and chants led by both BAMN and Refuse Fascism, the character of the rally connected Coulter up to the Trump/Pence regime much more fully, in a way that would not have happened on its own. People had more understanding that Coulter was a fascist and through the night got a handle on the connection of Coulter to the fascism emanating from the Trump/Pence Regime.  Across from the hall where Coulter was speaking were projections that covered the full face of the building—with exposures of Coulter and Trump Pence Out NOW.

Refuse Fascism had put out a leaflet and a sheet of quotes from Ann Coulter which got out to people over 48 hours and were all over campus bulletin boards. People came with the bright green sheets Coulter’s quotes were printed on. Professors let us make announcements in classes. People took up the Refuse Fascism chants, bellowing: “Trump Pence Out Now,” “Don’t Tell Me It Can’t Happen Here, Don’t tell me wait another year, Trump Pence Out Now!” “Fuck your borders,” “Humanity First.”  Then people added “What do we want? Open borders—when do we want them? Now!”

I opened up the bullhorn and throughout the rally about 20 people got on it and spoke out. People talked about the horrific things happening to immigrants, the stripping away of LGBTQ and women’s rights, the white supremacy, the environment. Some students started chanting “Queers against fascism!” So I brought the microphone over to them and they said it through the bullhorn. Many people cheered but weren’t taking it up. So I said to one of the students, “you have to tell people that even if they aren’t queer they should say the chant.” So he got on the mic and said “this chant is for everybody whether you are queer or an ally” then he was greeted with a mighty roar “QUEERS AGAINST FASCISM.” Several students came up to me and asked me to say “Free Hong Kong” through the bullhorn, and the protests there seemed to be inspiring some of the students.

Throughout the rally I struggled with people. People wanted to raise chants that called Coulter a bitch so I told them to stop and said something simple “Bitch is a word men use when they rape women, it’s degrading. We can do much better. Coulter is a fascist, a white supremacist, that’s what we should say about her.” People thanked me for struggling this way. I did a lot of agitation on individualism: “Since when do you have to be directly affected, to know that it is wrong and that you should stand up against it?” People responded with uproarious cheering. “Enough of all this looking out for ourselves, our careers, our futures while people’s lives get destroyed and the planet burns.” More uproarious cheering. People also responded well to agitation on the impeachment, the elections, and indicting the Democrats for complicity. Off one round of agitation someone walked up and said, “Ok, you are saying Trump is fascist, what do you mean? Can you help me understand what fascism is?”

We got reports outside that during her speech, when Coulter started talking about Trump’s white supremacist wall, she was disrupted by a student and member of Refuse Fascism who stood up in the audience and called out, “You want to make America white again!” as she was being unjustly dragged out, she yelled: “You are a fucking racist Ann, you are a fucking Nazi.” We started spreading to the students what happened inside, people cheered for what she had done and on the spot a dozen people at the protest got on their phones and called Berkeley PD to demand her release. They threw four charges and $60,000 bail at her. Oh yeah, UCPD made sure to “not be too nice,” using excessive force intentionally causing pain and twisting Brandy’s arms, and subjecting her to a strip search in jail and more arm twisting.  A student with BAMN went to jail that night also. This is what happened to people exercising their right to speech that opposed the Nazi rally being held on campus that night.

The police were very violent with people throughout the day, snatching out of the crowd anyone who was wearing something covering their face, even going so far as to attack a student wearing a Hijab grabbing her by the hair.  Police arrested, beat, and threatened protesters with weapons at point blank ranges. Anger seethed among the students with many shocked at the level of brutality. People chanted anti-police chants and yelled at the pigs, many calling them pigs. There was outrage in the voices of students as they chanted with us, “Trump’s Unleashing Racist Hate, He’s building up a police state, Trump/Pence Out Now!”

Now that I’m sitting here writing this I’m thinking about three things. I’m thinking about how important this is that thousands of people demonstrated with fierce determination—taking up #OutNow chants and with a widespread and basic feeling that this IS fascism even as many don’t fully understand what that means. Second, this protest was a real sledgehammer hitting at the complicity and passivity of so many millions of people. This is a living model to how students on dozens of campuses across the country who are waking up to swastikas and racist manifestos, should respond. And third, for reasons I still don’t fully understand, this is a moment where thousands on the UC campus broke through the mental shackles that keep people from acting and a kind of passion and fierce determination was unleashed. This was not protest as usual, this was Berkeley becoming Berkeley again.