A Report from the Refuse Fascism National Meetings 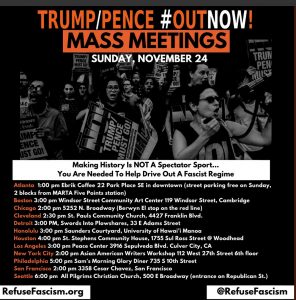 On November 24, RefuseFascism.org held meetings in over a dozen cities, bringing together more than 250 people from diverse backgrounds and political viewpoints. Together, organizers new and old grappled with the big questions of what was accomplished through the five weeks of protest which launched the #OUTNOW Movement, and how to build on this beginning to go forward to drive the whole Trump/Pence regime from power through massive, sustained, nonviolent protest. To this end, important plans were forged for a month of #OUTNOW December Disruptions to advance the reach, influence, and organized strength of the #OUTNOW Movement.

One of the most important things accomplished through the launch of the #OUTNOW Movement, and then taken to a higher level through these mass meetings, was the forging of new cores of leadership and a growing organized movement to drive out the regime. New people helped lead the meetings and new cores of people played active roles in advocating well for the #OUTNOW mission. Overwhelmingly, these new people were attracted by the seriousness of the #OUTNOW Movement in indicting the Trump/Pence regime for being fascist and for modeling the kind of sustained, nonviolent protest that it is going to take (on a much greater scale) to drive it from power.

A big part of the meetings was grappling with the questions: “How to move hundreds of thousands and ultimately millions into the streets in sustained, nonviolent protest in cities and towns across the country? And, how to move people from ‘I support you! Thumbs up! Good luck!’ to taking to the streets and organizing others to do so too?”

There was discussion over whether the answer to these two questions is mainly a matter of finding the right organizing techniques. Or, whether the answer to why there has not been protest here like what is going on around the world is more owing to larger factors in the political situation and how people here have been led to see what can be done about the regime. Increasingly, while recognizing the need to improve our organizing and messaging, the meetings united around the understanding that the biggest obstacles we face have to do with the way millions have allowed themselves to get normalized to the regime and its crimes, and the way far too many who hate this regime are still clinging to the hope that the Democrats, the impeachment, the 2020 elections, or something else besides them acting themselves will stop this nightmare for them. Some themes that emerged:

Key in addressing these questions, as well as others that came up, are the Refuse Fascism website (RefuseFascism.org) and social media (@RefuseFascism). These platforms already provide essential analysis and exposure, particularly through the writing and speeches of the RF Editorial Board. But all this needs to expand with more voices, more exposure of the crimes of the regime, and more polemics with the cost and reasons proffered for not doing here what people are doing around the world. And all this must reach much, much further. Ideas were kicked around for this and people who want to volunteer to write, to produce graphics and design, to assist with the web, or to join the social media team should write in to: info(at)refusefascism.org.

After wrangling deeply with what is described above, people wrestled with and united around plans for a month of activities through the end of the year under the theme: “There Is No Santa Claus and He Won’t Remove Trump and Pence. December Disruptions. Trump/Pence #OUTNOW!”

The centerpiece of these plans include continuing to fight for the mass, sustained, nonviolent protests demanding “Trump/Pence #OUTNOW!” through nationwide protests on December 14, and important protests to disrupt the normalization and get the word out about the 14th on mass transit and in other ways on December 7. At the same time, creative actions and disruptions are being planned throughout the whole month. These include protests to take on representatives of the Trump/Pence regime. This also includes creative flash protests, banner drops, and other political actions. As described in the plan developed by Refuse Fascism, the December Disruptions have three aims, to: “[1] expose and confront the fascist regime’s crimes—where and when they occur; [2] challenge and disrupt the normalization and complicity with fascism and the politics and protest as usual that blinds those who should be in the streets to the catastrophe that will be, should the regime remain in power; and [3] inspire and mobilize people to take up the #OUTNOW! Movement.”

Already, some of these actions have begun to be shared on Refuse Fascism’s social media (@refusefascism) and put on the calendar for December at RefuseFascism.org. In the coming days expect to see more. [Read the full plan here.]

Also key in this period through the end of the year will be a mass movement of fundraising. This will be critical in building up the ability of the #OUTNOW Movement to reach and move millions in the new year and is a critical way of spreading and growing the organized base of this movement now. Donating funds, purchasing and wearing #OUTNOW merchandise, and coming together to raise funds—including through holiday parties in most cities with Refuse Fascism chapters—is one of the most meaningful ways to join a community of others taking responsibility for preventing a fascist America.

In conclusion, while the enormous challenge of shaking millions out of their complicity with fascism and moving them to join the fight to drive out the regime still lies before us—we not only made an important beginning to build on through the five-week launch of #OUTNOW, the mass meetings on November 24 made real advances in forging the necessary leadership, organization, and plans to fight our way forward. In the Name of Humanity, We REFUSE to Accept a Fascist America! Join us in the fight to drive the Trump/Pence regime from power.

Is it right to call this a FASCIST regime? What is fascism? How would a fascist America impact the world?

Watch the livestream of the #OUTNOW teach-in and dialogue at UCLA, “Could it really happen here? Is the Trump/Pence Regime bringing American fascism? Is silence complicity?” In Los Angeles, attend live at Franz 2258A, UCLA Campus (across from the Faculty Center).

Tune into the #OUTNOW Webinar (normally on Wednesday, this week rescheduled so as not to conflict with the UCLA teach-in). This week’s Webinar will have a live New York audience Q&A with Andy Zee on “The catastrophic danger to humanity posed by the Trump/Pence regime, and why that requires nothing less than the determined sustained struggle of the #OUTNOW! movement.” Register here.