Sights and Sounds from Late May, 2020

“Refuse Fascism will continue to expose and oppose every outrage when it happens, while we recognize the stark reality that it is the Trump/Pence fascist regime itself which poses the existential threat to humanity and must be, and can only be, removed from power by the action of millions of people through sustained, mass, non-violent protest united under the demand that the Trump/Pence regime must go… And we have to get people to understand that it is actually a FASCIST regime that is the connecting factor.”
– Read As Death Toll Rises, Our Central, Unskippable, First Order Demand: Trump Pence Out Now

Atlanta May 22 – Pence in Town

Today in Atlanta when Christian Fascist VP Pence was in town we brought the demand:
In the name of humanity, we REFUSE to accept a fascist America! Trump/Pence #OutNow!
Join us!
Sign up & donate https://t.co/cVmiL2ZaE9 (all donations made today up to $500 will be matched) pic.twitter.com/8Qqw6EXelh

San Francisco May 21 – Challenging the Masses with the Message

From a Refuse Fascism activist 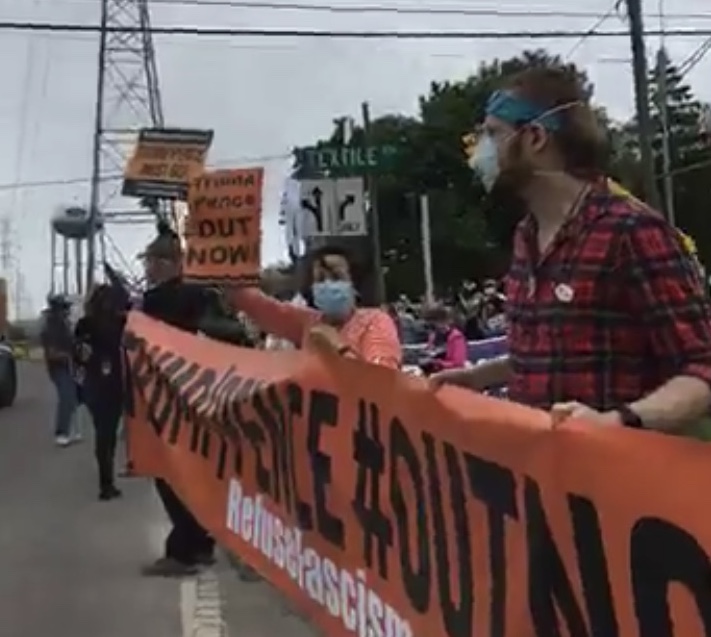 Only a few days before it was to happen, we heard about Trump’s planned trip to visit a Ford plant in Ypsilanti.  It was announced he was coming to Michigan, which has become an epicenter of the Reopen movement, where armed fascist thugs forced their way into the state capitol, where Governor Whitmer has become the latest target of the fascist “Lock Her Up” chant for maintaining stay at home orders in a state whose people have been hit hard by Covid-19.

We were thinking hard about how to do something that would have real impact given our small numbers, and made a basic plan and publicized an event. Then we got word from the Refuse Fascism office that some from the local Democratic Party wanted us to call to connect with people who wanted to protest Trump’s visit. One of these people went on the RF website, copied photos of people with the #OutNow! signs, and texted them to friends and family with the invite to join. We were also joined by a couple of women who saw our event on Facebook. Nine of us, most of whom had only just then learned about Refuse Fascism, headed off with a 20’ #OutNow! banner into a scene where we knew Trump’s howling supporters were already gathering.

There were about 75 Trump supporters there, more or less; they didn’t mobilize in full force, but they did bring all their vitriol, swarming us at times, screaming at us to go home. Our people united strongly behind the chants “Trump/Pence Out Now!” and “Humanity First” and despite our much smaller numbers, we were successful in drowning them out every time they started up with “4 More Years.” I think we were also able to make a more cohesive force that amplified other protesters who came very bravely with their own signs.  We made contact with them, including young Bernie supporters who were being taunted by the Trumpers that they had been “betrayed” by Democratic Party.

This part of Ypsi has both very posh lakefront properties and at the same time is a concentration of Black people and is one of the poorest zip codes in Washtenaw County. Some Black people came from an adjacent apartment complex. At first there was some wariness of what we were all about, but quickly people took signs, flyers, stickers, took up the chant “Out Now!” and exchanged numbers with us. They took up calls and response – “Out When? Out Now!” and “Wait until November? No! OutNow!” A couple started off a chant of “Power to the People” after RF did a shout out on the bullhorn to the different people who had come to stand up to the fascists.

There was also a car caravan which circled the area which was focused on stopping evictions, and gave us support. The people with us were summing up how great our impact was compared to our numbers because we were united around the banner and its theme: Trump/Pence #OutNOW.

The question of the elections is huge. The people who were instrumental in this protest are attracted to Refuse Fascism.  One person had initially met us at the debates in Detroit and had joined us in holding up the banner then.  Voting is cardinal to them. One of the women told me she was bothered by any suggestion of criticism of the Democrats in my agitation – in this case it was simply the statement that the Democrats cannot stop fascism.

The guy who organized his friends and family talked about what is moving him about Trump. He is deeply angered by the assault on the truth in every arena, and also the attacks on the environment that we may not be able to recover from. That was a theme from people – Trump is doing things we may never be able to repair. And yet, it is hard for people to comprehend a different path than relying on the Democrats.

We also talked to the woman from a local office of the Democratic Party who gave us contacts and said she would refer others to us if they called. She feels that we are more radical than she is, in that we call it fascism which she agrees with, but thinks it turns off other people that she works with.  She wanted me to know that she feels all of us should consider ourselves as working together, even with the differences. She is someone we will keep in touch with – I wonder, are there any other local Democratic parties that have referred people to RefuseFascism?

Tactically, we need to give more thought to how to make protesting responsibly part of the “in your faceness” of it, like they did in Philly with the Trump/Pence #OutNOW banner and flipping it over with the Reopen=Death, but also using it as a barrier. The thugs at times targeted the bullhorn; one made a point of deliberately coughing on whoever who held it. We should have in these problems and some solutions even as we are getting openings to do more than we anticipated.

Chantelle’s comments on Inside with #OutNOW LIVE May 22 on Trump’s remarks about the good “bloodlines” of Henry Ford have so much packed in. Henry Ford was a supporter of the Nazis, and there are implications in terms of the view of white people as the supreme race.

His comments followed Trump’s meeting with Black leaders, which was utterly stomach churning. Do you think it was deliberately set up to look like a scene from The Godfather, with all those people paying fealty, doing everything short of kissing the man’s hand?

Trump’s comments about the CDC reopening churches, which he carried forward the following day, and his statement that if there is a resurgence of the virus he will not under any circumstances shut down the economy again are posed against  Whitmer’s decision to continue the stay-at-home orders. We are personally (anecdotally) hearing from people resentful and resistant to being pushed into returning back to work when things are so clearly just as dangerous as when we first shut down.

Projected in Oakland, CA, May 20 – On the National Day of Mourning

Los Angeles, May 19 – A banner on the freeway

In the name of Humanity we refuse to accept a fascist America #trumpPenceoutnow
Read, sign & share the Statement of conscience at https://t.co/mhZbInMiCr
Donate via
Venmo @ Refuse-Fascism

Some joined us on their porches w signs & 1 man came with pots & pans (not pictured).

Shake off the passivity & join the struggle to remove this fascist regime.https://t.co/fXOv7aAt1w pic.twitter.com/f0ebt2yGd4