Trump’s birthday “celebration” on June 14 came at a time when Trump is not just speaking the language of fascism, he’s acting on it – calling out the military and his fascist shock troops and labeling righteous protesters ‘domestic terrorists’ – an ominous step towards consolidating an American fascism, white supremacy, xenophobia and patriarchy wrapped in the Bible and the American flag. But the uprising of the people has proven that this regime is not all powerful. We are the force that can stop this regime, millions of us in cities and towns across the country demanding TrumpPence Out Now, and every day shows us even more starkly: Trump and his whole regime must go NOW.

This nightmare must end. The Trump/Pence regime must go! In the name of humanity, we refuse to accept a fascist America.

Samantha from @RefuseFascism talking about why we have to take up the demand #TrumpPenceOutNow if we are going to have justice. pic.twitter.com/Kfnj1foxWo

13 year old girl put here in front of the White House saying she should not be scared to walk down the street and getting shot by police & how Trump is making this worse. #BlackLivesMatter #TrumpPenceOutNow pic.twitter.com/Tm0UAuXal2

Along with covering rallies by pro-Trump fascists, USA Today reported:

Trump’s birthday falls as protests against police brutality and racial discrimination continue in cities across the U.S. Organizers of Sunday’s protests are observing the president’s birthday with calls for him to leave the White House.

“If we want to end white supremacy, we must start by ousting the White Supremacist-in Chief from the White House,” said Carl Dix, a leading organizer of RefuseFascism.org. “On Trump’s birthday, let’s fill the streets & SAY GET OUT!! In D.C. and everywhere.”

CNN reports that the protests against white supremacy at the White House are turning to drive out Trump and Pence. #TrumpPenceOutNow pic.twitter.com/YwyUS0hkuY

London Daily Mail: “Birthday boy Donald Trump flies back to Washington after weekend at his Bedminster golf course – and is greeted by fresh wave of protests outside the White House”

Hollywood at the Trump Star

Some sights from #Hollywood at #PRIDE2020 #ABLM #BLM solidarity march.

It’s Donald Trump’s birthday and we say #BoyBYE! Pack up your fascist regime and GTFO the whitehouse NOW!

🎶 Super Callous Fagile racist sexist Nazi Potus- Donald Trump our president is something quite atrocious- We need to stand up to this man before we are all homeless 🎶#BunkerBirthday #BoyBYE#Fucktrump#hollywood #PRIDE2020 #losangeles pic.twitter.com/9r7xfmHHaf

Thousands of “All Black Lives Matter” demonstrators converged on Hollywood Boulevard in front of the TCL Chinese Theatre on Sunday, denouncing racial injustice and supporting LGBTQ rights, before marching on to West Hollywood as protests continued nationwide.

The march was organized by the Black Advisory Board, made up of Black LGBTQ+ leaders and organizations. On the event’s website, the board posted a statement announcing a protest “in direct response to racial injustice, systemic racism, and all forms of oppression.”

Some activists gathered around President Trump’s star on the Walk of Fame and demanded his removal from office because of his divisive rhetoric and insensitivity to racial justice issues.

Chantelle Hershberger, an organizer with RefuseFascism.org in Los Angeles, connected the swell of concern about police tactics and racism with the president’s rhetoric in office.

“Trump is not separated from what’s happening right now. There is a whole connection with this normalization of police brutality,” she said, recalling a speech the president once made in which he jokingly encouraged rough treatment of people arrested by police. “It’s unbelievable that he’s in power. We can’t live another day in this nightmare.”

Some protesters gathered around the president’s star, which has been defaced in the past, and a handful of young men stopped to bang their skateboards on his name…

In Los Angeles, Trump’s birthday was “celebrated” a day early in the streets of Hollywood, in the face of fascist Trump supporters who harrassed the marchers. Actress Jodie Sweetin spoke and told the crowd to keep demanding Trump get out now, and to use their voice to stop fascism.

Trump is a fascist, there’s no doubt, it’s up to us to drive him out 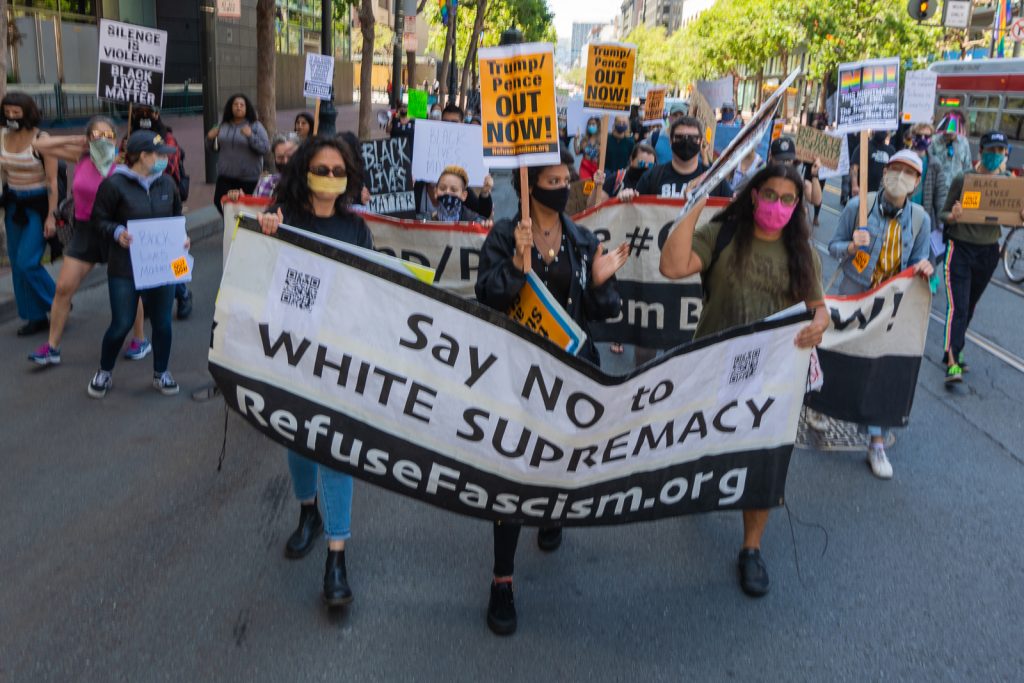 Bay Area musician Sage performs at San Francisco Refuse Fascism! rally in front of a barricaded Trump-owned building on California Street: “Which Side Are You On?” #RefuseFascism pic.twitter.com/GO4drF9pLp

Alright Seattle getting the “celebration” started.
Fuck your birthday Donald Trump! Get out of the White House and take your fascist regime with you! We need to stay in the street and drive this regime from power. #TrumpPenceOutNow #sundayvibes pic.twitter.com/B8fzIGgYr1 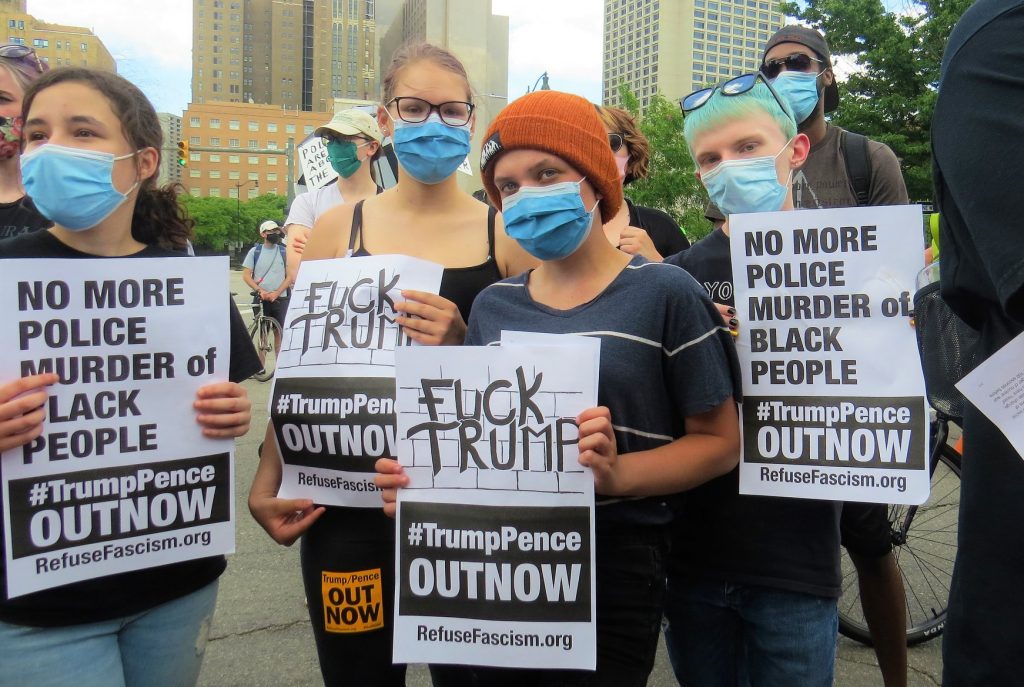