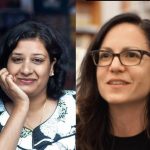 A few days after the Supreme Court refused to block the extreme Texas abortion ban, Sam Goldman (@SamBGoldman), Coco Das (@Coco_Das) and Sunsara Taylor (@SunsaraTaylor) discuss the roots and ramifications of this dangerous new law. All abortions, without exception for rape or incest, are now illegal just two weeks after a first missed period; plus vigilantes are incentivized to hunt down not only those who seek abortions but anyone who assists, down to the taxi driver who may have given a woman a ride to the clinic.

Read Coco Das’s writings at RefuseFascism.org including her recent piece Genocidal and Deadly Serious: Dan Patrick, Texas Fascist Lunatic Scapegoats Black People for the Pandemic. Sunsara Taylor co-hosts The RNL Show on YouTube and We Only Want The World on WBAI and WPFW.

For more legal analysis of the law and the effect of the US Supreme Court in refusing to block this unconstitutional law that directly violates Roe V. Wade, listen to the recent episode of Amicus with Dahlia Lithwick: Abortion, Surveillance, and Vigilantism: An American Story

Watch the video of the Body Talk Dance Company’s protest dance in front of the Austin Capitol on September 1.

*For Texans in need of abortion services and more resources, including information on who can help with funding:

Music for this episode: Penny the Snitch by Ikebe Shakedown.