Refuse Fascism Statement on the Acquittal of Kyle Rittenhouse:

We Need a Beautiful Rising to Stop Rising Fascism
No Fascist Vigilantes in Our Streets! →

Sam Goldman and Coco Das discuss the Kyle Rittenhouse trial in the proper context of the fascist movement he is a part of on the Refuse Fascism podcast.

Paul Street: “A not-guilty verdict in this case will be another step towards a fascist America…”

The Rittenhouse Trial and Two Sides in Contention:

A Beautiful Rising or Rising Fascism 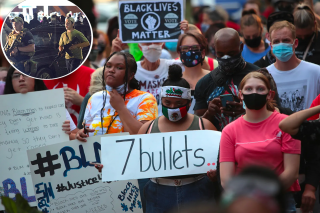 We must be clear on the righteousness and heroism of standing up for Black lives and against fascism. Kyle Rittenhouse’s victims showed selfless courage, both in protesting the shooting of Jacob Blake and in confronting an armed vigilante thug. All people with a heart for humanity should summon this kind of courage, joining together and standing shoulder to shoulder to stop the fascism threatening to engulf us.

This week, I’m returning to Kenosha along with others from the Chicago chapter of Refuse Fascism during the trial of Kyle Rittenhouse. I go there not merely to condemn Kyle Rittenhouse but more importantly to convict the racist and fascist politics and the underlying system of oppression that produced Rittenhouse’s crimes.