It’s up to US — the PEOPLE — to STOP a Fascist America!

Become a RefuseFascism.org Sustainer with a monthly donation

Right now, as you read this, whether or not we can fight to bring forward the mass movement to drive out the Trump/Pence fascist regime is in your hands.

When you step up to sustain RefuseFascism.org by donating on a monthly basis,you make a tremendous difference in whether or not the message and movement to drive out the Trump/Pence regime in the interests of humanity can mobilize the thousands who reach the millions needed to make history.

We are two years into a fascist regime that has banned, terrorized, jailed, deported, and murdered those it deems less than human. It imposed a Muslim ban – demonizing and cruelly punishing a whole religion. It continues to tear immigrant children from their parents and lock them in inhuman and barbaric cages in blatant and sneering disregard for public outcry, court rulings and congressional inquiries. It has bludgeoned the truth, overturned the rule of law, and incited physical violence against the press. It is moving, including through packing SCOTUS with a pro-fascist majority, to re-institute the most vicious “traditional values” including dehumanizing and persecuting LGBT people, and imposing a Handmaids Tale vision of women as breeders. This regime pours gasoline on the planet’s environmental emergency and declared war on the science of climate change and evidence-based science itself. And the Trump/Pence regime has unleashed MAGA mobs and terror, including armed thugs ready to follow whatever orders Trump issues. This trajectory will continue, become worse and can be made permanent unless and until WE force them to stop, by driving them from power.

Our actions need to measure up to the danger we face. Be part of building NOW for determined, nonviolent protests that flood the streets nationwide. Protests that continue day after day and don’t stop, creating a political situation in which the demand that the Trump/Pence regime be removed from power is met.

That’s where YOU come in, with your monthly support for Refuse Fascism.

It’s up to US — the PEOPLE — to STOP a Fascist America!

Let’s be honest with ourselves. The so-called #Resistance has essentially served to normalize this fascist regime: fixating people on the Mueller investigation, on the new Democrats elected to congress, and now on the 2020 presidential election. Let’s get real, the Democrats are not stopping this nightmare as they continue to collaborate with this fascist regime. Following them, relying on them, leads to catastrophe.

So what could stop this nightmare for humanity? An unrelenting, uncompromising mass movement of people from the big cities to the small towns, from the campuses to the churches planting themselves in the streets demanding “The Trump/Pence Regime Must Go!” coming back day after day, until this demand is met and the vicious fascist regime is driven from power.

Bringing that movement to life is the mission of RefuseFascism.org. And that is why it is so essential that YOU step up now, to sustain it.

Confronting the reality of what this regime means to humanity, what it has already done, what it threatens to do, and the pieces of the fascist clampdown it has already put in place, is not trendy at the moment. It’s “easier” to put one’s faith in fatal illusions that change will come without the kind of sacrifice and struggle Refuse Fascism is fighting to bring forward. But trendy or not, truth is truth, and every great cause in history (like ours) has had to fight repeated rounds to win a critical mass to act. Right now, whether Refuse Fascism can reach people and speak to them with our powerful and inspiring message that connects with what people really know in their heads and hearts to be true depends on YOU stepping up to become a sustainer of this urgent work.

Each dollar, each month, determines how many people are awakened and are drawn into the great struggle of building a movement to drive out this fascist regime.

> > Become a sustainer of RefuseFascism.org in any amount via credit or debit card; Paypal; or by check.

> > Or make a one-time donation 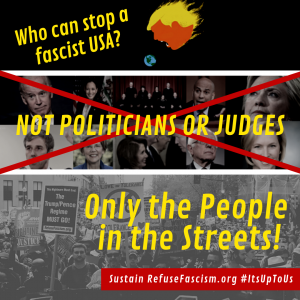 Other ways to sustain: