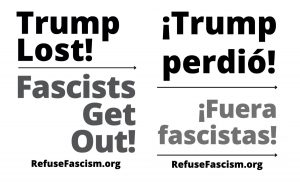 Find or host a protest

Principles of our movement demanding Trump/Pence Out Now

In the name of humanity we refuse to accept a fascist America. We are calling for and organizing nonviolent protests involving a broad coalition of all the decent people who see the urgent danger of the Trump Pence Regime at this moment and refuse to live in a fascist America. – READ MORE

First and foremost, it is important to stay focused on the purpose and message: mass sustained non-violent protests around the central slogan Trump/Pence Out Now. This regime is illegitimate both because of stealing the elections and because fascism, white supremacy and theocracy are never legitimate. We have right on our side, and it is important to base ourselves on and return to this moral and political grounding. – READ MORE 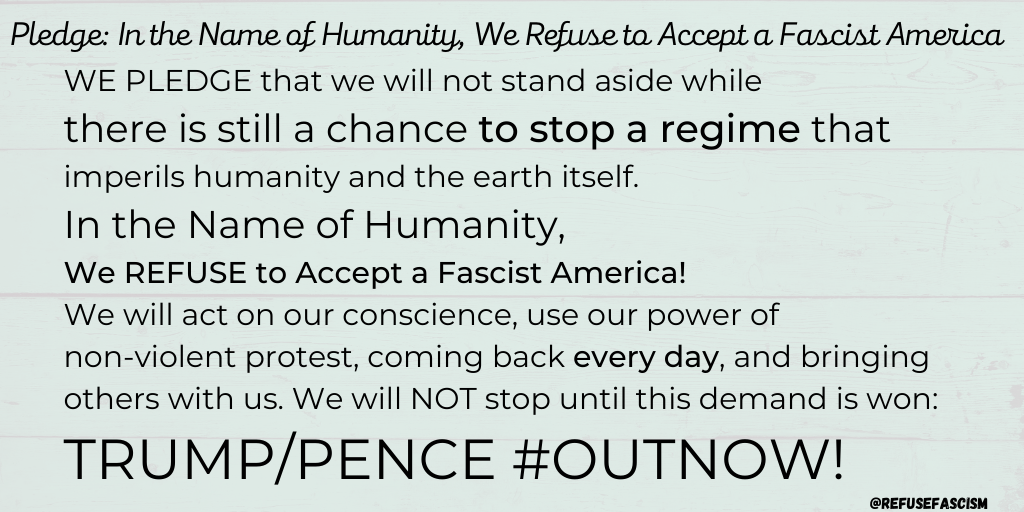 Generate a palmcard for your protest

If you need help with generating or printing the post, do not hesitate to contact our National Office. Call: 917-407-1286. Write: [email protected].

Social Media Kit: Be part of amplifying on social media daily nonviolent protests united by the demand Trump/Pence Out Now continuing each day through the election.

Be part of mobilizing everyone who cares about the future of humanity and the planet itself along with all movements for justice to come into the streets to demand Trump/Pence Out NOW!

Donate & Fundraise: Donating funds to Refuse Fascism is one of the most important ways to strengthen and spread this movement so that we can mobilize the millions needed to drive out this regime.

And ask your friends and family to join you.
Venmo @Refuse-Fascism or CashApp RefuseFascism

A guide to how to build this movement: Some Methods We Need to Hold to Firmly and Deeply Instill in Everyone Working to Drive Out the Trump/Pence Regime

Sign up to volunteer to help with graphic design, research, translation, transcribing, press and more