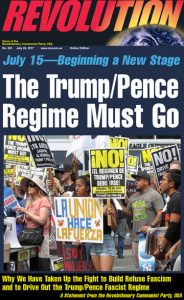 A Statement from the Revolutionary Communist Party, USA

This statement first appeared on the site Revolution/revcom.us

People have asked: What is the relationship between the Revolutionary Communist Party, USA and Refuse Fascism? Here is our answer.

All over the world billons of people suffer horribly and needlessly because of the system that prevails around the globe. A radically different and better future is possible. The Revolutionary Communist Party, USA is dedicated to the emancipation of all of humanity from every form of exploitation and oppression all over the world. This requires an actual revolution, and we work every day to popularize and lead masses of people to carry out the strategy to make this revolution at the soonest possible time.

After the election of Donald Trump, we confronted the reality that the Trump/Pence regime is a fascist regime. We recognized the horrors that this would mean to people living in this country, to humanity as a whole, and to the planet if this regime were allowed to consolidate their full fascist program. We have analyzed in “Some Points on Strategic Orientation for the Next Period” that while fascism is not a different system from what exists in the U.S. today, it is a qualitative change in the way in which the capitalist-imperialist system is governed and in the civil norms of society. Fascism essentially eliminates what have been traditional democratic rights. Indeed, the Trump/Pence regime is moving quickly to bludgeon and eliminate whole groups of people, as well as the people’s ability to stand up and fight for a better world.

If the Trump/Pence regime is able to fully consolidate its rule and program, this will exponentially increase the terror, brutality, and devastation suffered by people all over the world, put the planet itself in greater peril, and will dramatically curtail the ability of the people to fight for a better world, whether through revolution or through other means.

Recognizing this qualitative danger, as well as the way that this dramatic change has jolted millions into political life, we took responsibility to propose to a diverse group of people that we must do everything we can to stop this regime and the imposition of fascism. Together we recognized that we needed to form an organization to unite all who could be united to take up the fight to drive this regime from power through mass, determined resistance from below. A Call to Action was issued under the slogan: “In the Name of Humanity, We REFUSE to Accept a Fascist America!” and an organization, Refuse Fascism, was formed with the single unifying mission to Drive Out the Trump/Pence Regime! Our Party is committed to fulfilling our responsibility to contribute as much as we can to the mission of Refuse Fascism precisely because of the tremendous stakes for the future.

While working within Refuse Fascism and respecting the principles of its Call to Action, we welcome and carry out principled discussion and struggle over the root of the problems humanity faces and their solution. As said nearly 170 years ago in the Communist Manifesto, genuine communists “disdain to conceal [our] views and aims.” Instead, we openly and boldly put them forward, just as we expect that others should and will put forward their views. This enables everyone to learn as deeply as possible about what we are actually facing, to unite as firmly as possible around key and shared objectives, and to respect and learn from our differences.

For this reason, we urge everyone to dig into the work that our Party, and in particular the leader of the Party, Bob Avakian, has done over decades to provide clarity and direction in understanding and acting on what is actually going on with the ascension of the Trump/Pence regime and what this arose out of, the stakes of this for humanity, and why it must be driven out through massive political mobilization (getting and staying in the streets until this regime is gone). In particular, we recommend two important works from Bob Avakian that dig into this: “The Truth About Right-Wing Conspiracy… And Why Clinton and the Democrats are No Answer,” written in 1998; and, “The Fascists and the Destruction of the ‘Weimar Republic’… And What Will Replace It,” written in 2005.

And, every day the RCP provides articles, exposures, analyses, and polemics about developments in the world which provide guidance for the fight to drive out this regime, as well as the fight to make an emancipatory revolution, at www.revcom.us.

We invite all who yearn for a radically different and better world to get into the work of Bob Avakian, who has developed a new synthesis of communism—a qualitatively more scientific method and approach to knowing and changing the world. Key books to start with are: Science and Revolution, On the Importance of Science and the Application of Science to Society, the New Synthesis of Communism and the Leadership of Bob Avakian, by Ardea Skybreak; and, by Bob Avakian, these three works: THE NEW COMMUNISM: The Science, the strategy, the leadership for an actual revolution, and a radically new society on the road to real emancipation; the Constitution for the New Socialist Republic in North America; and BAsics, from the talks and writings of Bob Avakian. And there are two films that bring it all together: BA Speaks: REVOLUTION—NOTHING LESS! and REVOLUTION AND RELIGION: The Fight for Emancipation and the Role of Religion; A Dialogue Between CORNEL WEST & BOB AVAKIAN.

We encourage everyone to dig into this work and to share with us your reflections, questions, and/or critique in the spirit of deepening understanding of the problem and solution to the immediate battle to drive out the fascist Trump/Pence regime and of the great struggle to overcome all forms of oppression and exploitation. We welcome this engagement while working and fighting together to oust this fascist regime, not just for ourselves, but in the name of humanity.

There are those, however, including some clergy, who say they are opposed to the Trump/Pence regime yet have refused to unite with Refuse Fascism because of the involvement of the communists of the RCP. These people would do well to heed the famous statement of Pastor Martin Niemöller. Niemöller summed up the terrible mistakes he made in standing aside from and doing nothing to oppose the Nazis in Germany in the 1930s and 1940s rounding up one group after another—beginning with the communists—and the horrific consequences of allowing the Nazis to implement this “divide and conquer” approach.

The point of this statement is precisely to learn from the awful error Niemöller made and not repeat the kind of “distancing” he fell into which does great harm and has contributed to real disaster.

In contrast to that negative lesson which was paid for in the blood of many millions, let us unite firmly from our diverse perspectives to contribute all we can to filling the great need that faces humanity: driving a fascist regime out of power in the most powerful military power that has ever existed. Let us struggle with and learn from each other as we stand shoulder to shoulder together to make good on our shared commitment that: In the Name of Humanity—We REFUSE to Accept a Fascist America!