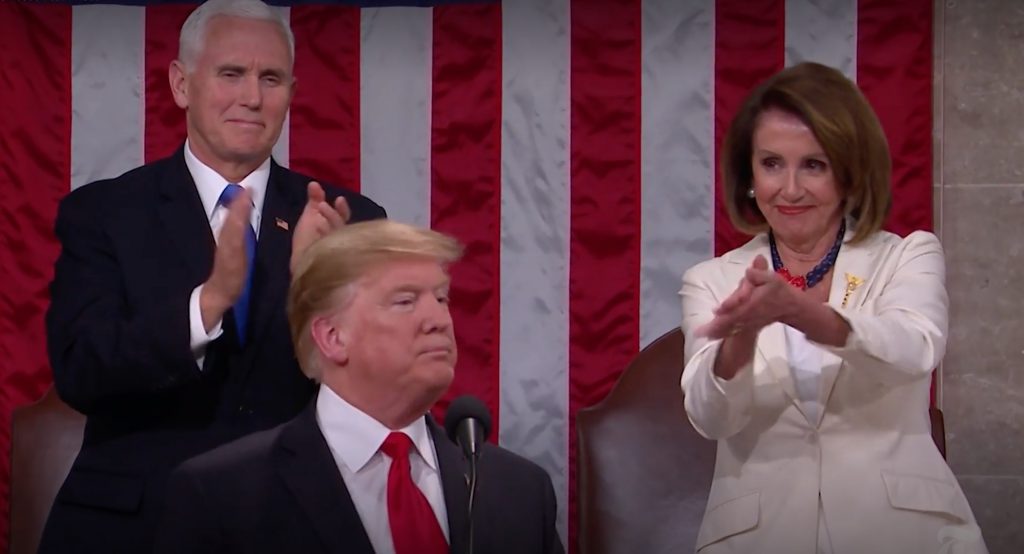 My essay, Women in White Surrender to Trump’s Thoroughly Fascist State of the Union, sparked some healthy and much needed debate within our movement to drive out the Trump/Pence regime through sustained, non-violent protest. My main thesis in this piece was that Trump’s State of the Union address clearly outlined a fascist program and intent to ethnically cleanse immigrants from our southern border, prepare public opinion for genocide based on vicious white supremacy and xenophobia, take away women’s reproductive rights, and wage war with Venezuela and Iran, while simultaneously recruiting new groups of people into supporting and rallying behind this fascist program. One sharp illustration of this was the behavior of the #womenswave, dressed in white that evening, and the surreal moment when they stood up and started chanting USA.

Listen to Refuse Fascism co-initiator Sunsara Taylor on radio station WBAI speaking with Coco Das on controversy over this article, and Luan Soco from the Revolution Club on why people need to stop getting played by following “identity” and deal with CONTENT instead.

The responses to this article, which we received via email and social media, ranged from gratitude to discomfort to revulsion. And while some arguments were easily dismissed (RF has been taken over by Russian bots; the women were not chanting USA)…there was one criticism I want to respond to in some depth because it concentrates a line of thinking we must break through in order to forge deeper unity and build a determined movement to stop this regime from carrying out its crimes against humanity.

It is very important for people who are coming to Refuse Fascism from different perspectives to be able to air their disagreements in an open and principled way. Therefore, I am not paraphrasing the critique here since it was posted publicly on the Refuse Fascism Facebook page. However, I am only quoting and responding to the parts relevant to my article.

It’s true that I was being deliberately provocative when I wrote, “If you have a heart for humanity, as sickened and disgusted as you should have been by Trump making crude conciliatory gestures and then going in for his vicious attacks on immigrants, women, and the people of the world — you should be more disgusted by the response from the women in white who were supposed to represent the people most under attack by this regime.” It is also true that Trump and Pence are doing all of the things listed, to women, to immigrants, to the environment, to the people of the world, and doubling down on them in this speech. That is why I called this a thoroughly fascist State of the Union that no one who claims they will fight for any one of the groups in the crosshairs of this regime could have sat through politely, let alone applauded, let alone echoed with the MAGA chant that stands for the American chauvinism that is used to justify this whole fascist program. This was a fascist speech, using effective fascist propaganda tactics, to successfully advance and buy complicity with a fascist program and nightmare future for all of us.

This was my strongly stated opinion as one of the commentators at refusefascism.org, not the official stance and certainly not the only stance of Refuse Fascism. Some within Refuse Fascism surely agree with me and some do not. The fact is, I was disgusted because my hatred for what this regime is doing to people does not waver depending on the circumstance. The #bluewave and #womenswave, represented in part by the women in white, has absorbed much of the hatred that millions of people feel for this regime and have taken the oxygen out of it. This was what was on display in the House Chambers that night.

At no point did I say that the women in white were to blame for the crimes of the regime. There is a difference between designing and carrying out crimes against humanity and becoming complicit with those crimes. But let’s be real, after Trump boasts that the U.S. has the most powerful military in the world and then promises to keep out “illegal” immigrants whom he claims are killing “countless” Americans, what does it mean to chant USA from the standpoint of the resistance? What effect does it have? How does that look any different to the children in concentration camps or the immigrants being terrorized or the people under the bombs and occupation of the most powerful military in the world? Does the world need us to defend those who clap politely and celebrate through a horrifying speech, or does the world need fierce and determined resistance from us in our millions?

That is what sexism is. This is the form that insidious sexism takes. And refuse fascism is perpetrating it and they are steadfastly refusing to consider anyone else’s experiences and points of view. I truly am sorry and I think it’s lamentable that you cannot understand that this is sexism. I have tried to explain it.

[As a sidenote: Sexism is when someone (any gender) talks down to a woman, assumes she doesn’t have any knowledge of a situation, assumes that she is ignorant, assumes that she is wrong, and then proceeds to try to educate her on a subject she knows well. It is dismissing the views, thoughts, and actions of women as inadequate, incorrect, ill-informed. It is not an explicit statement of hatred towards women. In fact, it is hardly ever explicit. The sexism that (yes) we all have is internal because we have learned it from birth and it has to be recognized in our own thoughts and actions and we have to be actively conscious of it and take steps to correct it.]

If this is a working definition of sexism, then as a woman of color, could I not turn around and say this criticism of my article is both sexist and racist? It is assumed I have no knowledge of what sexism is or how this regime is creating a nightmare for women, assumes that I am ignorant of what the women in white claim to represent, assumes that I am wrong about their assertions or their actions, and then proceeds to try and educate me about what sexism is. It is dismissing the views, thoughts, and actions (writing the article) of a woman of color as inadequate, incorrect, ill-informed.

I could argue that, but it would be absurd, because this is NOT an accurate definition of sexism. Anyone should feel free to critique the content of what I’ve written, as long as it fairly represents the facts and arguments presented. This should happen regardless of what my identity is.

But the question on the table is not how we should define sexism. The question is what Trump’s State of the Union speech posed for the future of humanity and the planet, and whether the response to it rejected, resisted, normalized, or celebrated that. It is disingenuous for anyone to claim that the women in white did not take on some leadership and responsibility to be the opposition to Trump that millions of people are relying on. For two years, people have been urged to put their faith and energy into these waves of politicians to be a check on Trump, all while the number of children in concentration camps swelled to 15,000 and the Supreme Court upheld one fascist Trump policy after another, and those are just two examples. On that basis, to say that the response of the women in white to the State of the Union speech does not warrant sharp criticism is the height of condescension. Implied in this critique is that the women in white deserve some kind of pass because they are women and because they are not members of the fascist Republican Party. I didn’t criticize them as fascists. I criticized them as leaders and purveyors of the #resistance and measured their response against the content of the speech and the danger it poses to humanity.

The official line of Refuse Fascism is that it is “a movement of people coming from diverse perspectives, united in our recognition that the Trump/Pence Regime poses a catastrophic danger to humanity and the planet.” This sort of article is not accepting people coming from diverse perspectives, and uniting in recognizing the danger that the Trump/Pence regime poses.

The principal part of this mission statement is that we are united in our recognition that the Trump/Pence Regime poses a catastrophic danger to humanity and the planet. We certainly want people coming from diverse perspectives, but on this point of unity, we cannot be diverted. If we become seduced into thinking that the danger this regime poses can be met with anything short of driving them from power through non-violent protests that grow every day until our demand is met, we are being seduced into accepting horrors we should not and do not want to accept.

I maintain that it is not actually within the power of these women to drive out this regime. It is not what they signed up for. Their job is to work within the framework of this system and cooperate with the regime in power. Stopping this regime is, in fact, OUR responsibility, not to be passed off to some proxy we hope can do it for us. We do not ask why the Weimar officials did not stop Hitler. We ask why the German people went along with the genocide happening in their name. Are we going to make the same mistake, or are we going to take the lessons of history, at a point when the stakes for humanity are even higher, and refuse to be sucked in to the mechanisms of fascism? It is painful to give up illusions, but taking off our blinders and confronting reality is also liberating. It helps us find a pathway to a future worth living in, not only for ourselves but for all of humanity.