Talk by author Jason Stanley on How Fascism Works: The Politics of Us and Them
May 30, Revolution Books, New York City 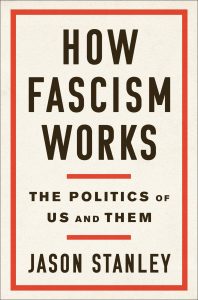 Fascist politics are running rampant in America today—and spreading around the world. Jason Stanley, a Yale philosopher, stands out as a scholar who not only uses this “f” word, but challenges people to confront the reality of fascism. He identifies the ten pillars of fascist politics, and charts their horrifying rise and deep history in his book How Fascism Works: The Politics of Us and Them.

Stanley spoke at Revolution Books May 30 in Harlem, in conversation with Andy Zee, spokesperson for Revolution Books who argues that Trump and Pence are so dangerous for humanity that mass, sustained non-violent protest is required to drive them from office.  The discussion will explore these issues and implications for how we act today.

“By placing Trump in transnational and transhistorical perspective, Stanley sees patterns that others miss… By calling Trump a ‘fascist’—a word that strikes many Americans as alien and extreme—Stanley is trying to spark public alarm. He doesn’t want Americans to respond to Trump’s racist, authoritarian offensives by moving their moral goal posts. The greater danger, he suggests, isn’t hyperbole, it’s normalization. And twenty months into Trump’s presidency, the evidence is mounting that he’s right.” —The New York Times Book Review (Editors’ Choice)

Jason Stanley is a professor of philosophy at Yale University; and is the author of five books, including How Propaganda Works, and co-author of the upcoming Hustle: The Politics of Language. He writes about free speech, mass incarceration, and authoritarianism for The New York Times and other publications.

Andy Zee is the spokesperson for Revolution Books, a co-initiator of RefuseFascism.org, and an advocate for the new communism and leadership of Bob Avakian. He was recently interviewed by The Young Turks’ Cenk Uygur about organizing for an actual revolution, and the urgency of driving out the Trump/Pence fascist regime.