Pasadena Weekly published the following article July 18, 2019 about the prosecution of two defendants for sounding the alarm against the Trump/Pence fascist regime 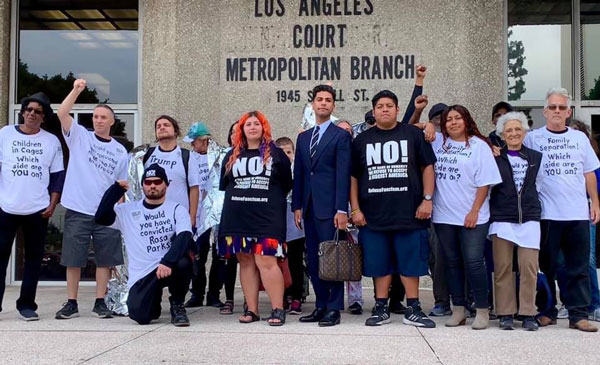 Donald Trump, the candidate who called Mexican immigrants “rapists” on the campaign trail, is now the leader of a regime running concentration camps at the border. This past weekend, ICE agents were to conduct raids in nine cities, including Los Angeles, making good on Trump’s threat to detain and deport millions of immigrants.

The vicious attack on immigrants is the spearhead of a larger fascist program by the Trump/Pence regime to radically remake society: civil liberties are stripped away and group after group is demonized on a road that leads to unspeakable horrors.

Millions of people want this to stop. But stopping Trump and Pence will take more than wishing something would change, or voicing our outrage on social media. People will have to step outside of their comfort zones. They will have to put something on the line.

Alex Hernandez and Chantelle Hershberger are two people who did just that. On two separate mornings in 2017, they stepped out onto the 101 Freeway, holding signs and blocking traffic to inspire people to take to the streets in nonviolent protest against the Trump/Pence regime.

Chantelle moved to Los Angeles from Ohio just before Trump’s election. It bothered her that after each outrage and protest, people just seemed to go home and normalize what the regime was doing. When asked about why she joined the freeway action, she said, “It’s one thing to talk about how wrong it is that a white supremacist is in the White House, and to even recognize the danger that ensues when you have the president backing these angry mobs of white supremacist militias. But it’s another thing when you understand that this is vital to consolidating fascism. You need to incite fear among the masses. So then I had to decide. What was I going to do about it?”

Alex grew up in South Central Los Angeles and saw firsthand the widespread violence of the police against black and brown people. After Trump’s election, he saw the extreme danger of a fascist regime at the helm of the most powerful country and military in the world. He took part in the freeway action because of what was going on in society at the time. “A year and a half ago, think of what the Trump/Pence regime was doing… threatening North Korea with nuclear war, banning Muslims, restricting trans people from the military. We did this to sound the alarm against fascism. Those were not normal times. And now, look at all the children in concentration camps, and lawyers for the Justice Department saying that migrant children don’t need toothbrushes, beds, anything sanitary… All these things have consequences. This is the logic that leads to genocide.”

Last month, prosecutors lost their case against Alex and Chantelle when the trial ended in a hung jury. They tried to frame their case as a simple traffic violation, despite the fact that the charges were brought by the highly political Major Crimes/Anti-Terrorist Division of the LAPD, a division with a sordid history of spying on activist groups.

Alex and Chantelle spoke in court about why they risked their lives to block the freeway, and moved several jurors to refuse to convict. But immediately after a mistrial was announced, the prosecution vowed to retry the case. By doing this, they join nationwide efforts to criminalize protest in the wake of Trump’s election and become enforcers of the fascist suppression of dissent. Through aggressive policing and prosecution, and anti-protest bills either passed or proposed in 35 states, a fundamental right is under serious threat. We should never forget Trump’s statement from the campaign trail that he longed for the days when protesters were carried out on stretchers.

These courageous activists stood up against a fascist regime before many people recognized that it was fascism. Videos of the freeway actions went viral, showing millions of people the kind of resistance that was needed. Supporting Alex and Chantelle and the rest of the freeway protesters, calling the City Attorney Mike Feuer’s office and signing this petition to demand that they drop the charges, and filling the courtroom when their trial starts on July 25, goes a long way in refusing to accept a fascist America. Many supporters of Alex and Chantelle have chosen to stand on the right side of history. We invite you to join us.