By Corey Hill, human rights activist and recent signer of the Refuse Fascism Statement of Conscience, Call to Act

When the house is on fire, it’s not the time to argue whether you want a kitchen re-model, or a change of paint. But that’s exactly what’s happening right now, in the United States.

The fire, of course, is the rapidly escalating fascist threat of the Trump/Pence regime. The details are too numerous to recount in full, but in just the past few months, the Trump regime has fired five inspectors general, threatened election integrity by casting doubt on the security of mail in ballots, and called for violence against Democrats and protestors. Their actions leave little doubt about their intentions: a permanent consolidation of power around a racist, dangerous authoritarian regime.

So why aren’t the rest of us devoting all of our energy to putting out the fire? Why aren’t all of us, every last one of us, shouting from the top of our lungs that we aren’t going to allow this to happen?

The sad reality is that the necessary unified opposition to the Trump/Pence regime’s dangerous assault on the rule of law has been difficult to cement. Part of this is due to a reluctance to cast aside the differences between those groups with the greatest clout and reach. 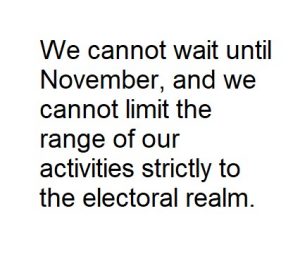 There are ideological differences to be sorted, that fact cannot be discounted. Yet those differences pale as compared to the lethal threat posed by Trump and his enablers within the GOP and the right’s ecosystem. We’ll have plenty of time down the road to figure out if we want to change out the tile in the bathroom. Let’s be clear, now, about who and what we’re dealing with.

Every individual and organization concerned about human welfare and the continued existence of functioning, vibrant systems of governance should come together, today, and form a mass, sustained campaign of protest and civil disobedience.

Environmental groups. Center-left civil rights organizations. Everyone from Indivisible to anarchists, from the insiders at the upper reaches of the DNC to people who’ve never joined anything in their entire lives — now’s the time to join. Now’s the time to take meaningful action.

We cannot wait until November, and we cannot limit the range of our activities strictly to the electoral realm.

Now’s the time to join a cross-organizational, cross-country, cross-class, cross-everything movement unified behind a single, overriding aim: opposing and removing from office the dangerous Trump/Pence regime.

Let’s put out the fire, before it’s too late. You can’t remodel a pile of ashes.