100 Hours Of NO! at
The FOX FASCIST NEWS NETWORK
Culminating on July 15 in protests in 15 cities to demand:
THE TRUMP/PENCE REGIME MUST GO!

In the Name of Humanity,

We Indict the FOX NEWS 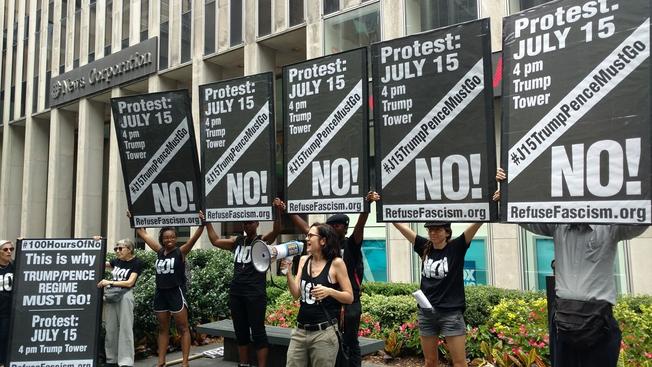 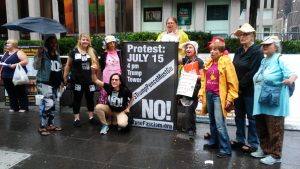 Raging Grannies sing their songs about Trump, mass incarceration, immigrants, war, and more in the rain. Refuse Fascism joins Raging Grannies to chant, “No Trump! No Pence! “No Fox!” And to call on people to join the protests tomorrow, July 15.

I’m out here to show my support. I really think that we all need to stand together. We are all fighting the same oppressor, so it is important to support other organizations when they are righting this fight. Specially when you’re doing something as crazy as standing standing outside for 100 hours straight! You need that moral support, you need that boost in spirit, so we came out to here to show our solidarity and say that Trump and Pence must go. They are running our country into the ground. I mean, they embody everything that America is, not idealistically, but everything that America is, from pillaging, the fascist ways, the racism, the xenophobia. We got to take a stand and hopefully we’ll wake up some of these people who are just out here walking, right? …

Two people wore orange jumpsuits to symbolize mass incarceration, torture at Guantanamo, and what this regime has in store for people who they say should be tortured. People used the “indictment” posters to call out the regime’s crimes.

Later there was a candlelight vigil for those who have been or will be victims of the regime, a dramatic scene that caused people to stop and engage with the message. Share the message all over social media, Join us tonight or Friday and be in the streets Saturday!

Wednesday: The Handmaiden’s Tale at Fox

Wednesday, July 12th, 4 pm: Refuse Fascism, joined by 4 “Handmaids,” indict Donald Trump and the Trump/Pence regime for the horrific crimes they have already committed against women in this country and around the world, with more in store, pointing to the facts on their poster – “The Trump/Pence Regime on Women and LGBTQ:”

Wednesday: Taking the Indictment to Fox 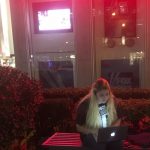 I am writing to you from outside the Fox Fascist News headquarters in NYC, where Refuse Fascism volunteers, with one of our co-initiators Sunsara Taylor, stationed ourselves beginning at noon Tuesday. We will not leave until Saturday July 15, when nationwide protests will begin with the unifying demand: The Trump/Pence Regime Must GO! In the Name of Humanity, We REFUSE to Accept a Fascist America. The #100HoursofNO! action has begun.

We are out here to indict and condemn Fox News for its role in proliferating white nationalist rhetoric, for spewing Trump’s lies and vile hate speech, normalizing and legitimizing a fascist regime in the White House, for vigorously dehumanizing Muslims and immigrants, attacking women, and for innumerable other crimes. FOX paved the way for Trump to build up a fascist base in the U.S. and today fills his supporters with lies, fomenting violence and encouraging them to attack everyone who stands in their way.

There is a glaring truth we must recognize and proclaim to the world: the Trump/Pence regime is a fascist regime. They are moving fast and sharpening their attacks on Muslims, on Black and Latino people, refugees, all immigrants, LGBTQ people, women, disabled people, the elderly, the poor, and the earth itself. Beyond all of this, the regime is maneuvering to qualitatively change the entire system of governing to ensure that their blatent dictatorship consolidates power and goes unchallenged.

Just before noon, we marched to the headquarters from Times Square chanting, “No Fox, No Trump, No Fascist USA!” The moment we arrived, the NYPD tried to split apart our group. Half of us marched into the public garden, an elevated space directly in front of the News Corporation building, while the police forcibly barricaded others of us out of the space. We have support from a strong team of lawyers, who have extensively researched the legal aspects of this action: we are protesting in a public space, open 24/7, and we have a constitutionally protected right to exercise our freedoms of speech and assembly here.  This incident is one of countless that prove the disregard and violation of this right, a phenomenon that is growing worse in states across the country as fascism moves to consolidate power.

Sunsara Taylor began speaking on the bullhorn explaining why we are here and what we are building for: protests around the country on Saturday July 15, a necessary step toward leading millions into the streets demanding that this regime be driven from power. We have eight massive signs exposing the criminal actions already taken by the Trump/Pence regime. Each of them includes powerful photographs and extensive text describing some of the most recent and most horrific attacks on immigrants, Muslims and refugees, women and LGBTQ people, Black and Latino people, people living outside this country, children, the elderly and the poor, and the environment. All of us are wearing NO! T-shirts, passing out flyers, stickers, and posters to the crowd streaming past, engaging pass
ersby and helping people get organized into this movement.

Tuesday at noon, RefuseFascism.org kicked off 100 continuous hours of protest in front of “Fox Fascist News Network” in midtown Manhattan. In their press release they described Fox as “the Goebbels of the Fascist Trump/Pence Regime. This is not hyperbole. This statement is based on actual facts, unlike the steady stream of lies and threats spewed from the regime’s mouthpieces at FOX.” The plan is for Sunsara Taylor, RefuseFascism.org, and many others to “deliver a living indictment of the Fox Fascist News Network and the Trump/Pence Regime. For 100 Hours, day and night, they will call on people to come testify and protest against the Trump/Pence Regime and the hate-filled bullshit from the mouthpiece of FOX.”

It did not take long to attract attention and draw sharp dividing lines among the streams of passersby. Sunsara and a number of speakers from Refuse Fascism called out the vicious, racist, anti-Muslim, misogynist actions and more already carried out by the Trump/Pence regime, and what they have in store if they aren’t forced out of power. They have set up a powerful display of seven 4-foot high posters at street level, each with facts about the Trump regime—about what they have done; what they say they will do; and what they have unleashed across the country—to women and the LGBTQ community; to immigrants; to Muslims; to Black, Latino and other oppressed people; to the environment; to civil liberties; and to the countries and people of the world. Right away people began stopping to listen, to read, and many to learn about the movement to Drive Out the Trump/Pence Regime and the call for the July 15 nationwide protests.

Many were glad to see and hear a raw, uncompromising condemnation of the Trump/Pence regime and the role that Fox News has been playing as the regime’s leading propaganda organ. They listened to the agitation; looked at, read, and took pictures of the posters to read later; and some signed up to become a part of Refuse Fascism and July 15. Others stopped, horrified and in some cases angered to see “their” president being so boldly exposed and denounced. Some of these people were so steeped in their own “alternative” facts they denied every actual fact on the posters. According to NBC News, things “quickly came to a boil” and a passerby shouted, “Make America great again!” And there were many others who were challenged, some because they are attracted to Trump’s “America First” call, while having questions about many of the things Trump says and has done.

This “occupation” is a very dynamic situation; it calls for many, many people to spread the word about and join the protest in front of Fox, and to get organized for July 15.

The Night-shift has arrived outside @FoxNews! Come tonight or tomorrow we will be here. #NYC pic.twitter.com/nTw5pX9YBm

100 Hours Of NO! at The FOX FASCIST NEWS NETWORK

Culminating on July 15 in protests in 15 cities to demand:
THE TRUMP/PENCE REGIME MUST GO!
In the name of humanity, We REFUSE to Accept a Fascist America!

FOX is the Fascist News Network — the Goebbels of the Fascist Trump/Pence Regime. This is not hyperbole. This statement is based on actual facts, unlike the steady stream of lies and threats spewed from the regime’s mouthpieces at FOX.

RefuseFascism.org says that this must be stopped and can only be stopped by the mass action of the people.

For 100 hours beginning at high noon Tuesday, July 11, building towards and culminating in nation-wide protests on Saturday July 15 to demand, “The Trump/Pence Regime Must Go!”

Sunsara Taylor, RefuseFascism.org, and many others will deliver a living indictment of the Fox Fascist News Network and the Trump/Pence Regime. For 100 Hours, day and night, they will call on people to come testify and protest against the Trump/Pence Regime and the hate-filled bullshit from the mouthpiece of FOX.

Mexicans are “rapists.” Punch protesters “in the face.” Grab women by their genitals. This is Trump. This is what FOX promotes. The Trump/Pence Regime is using the full force of the state to terrorize and tear apart immigrant families; to ban Muslims; to pour gasoline on the flames of a climate in crisis; to deprive women, LGBTQ people, disabled people, and Black, Latino, Native American people of basic rights; to menace the world with nuclear weapons; and to fire, bludgeon, threaten, and unleash violence against all opposition. The Trump/Pence Regime is a fascist regime. Fox is their biggest bullhorn. History has shown that fascism must be stopped before it becomes too late.

In the name of humanity, We REFUSE to Accept a Fascist America!

It starts on Tuesday July 11. The truth about this regime will be spoken. The lies of Trump/Pence/FOX refuted. We are calling on people to come down and testify. 100 HOURS OF GETTING READY for July 15 Nationwide Protests to Demand: The Trump Pence Regime Must GO!

SunsaraTaylor is a writer for revolution newspaper and co-initiator of RefuseFascism.org who has sparred over years on Fox with Bill O’Reilly and other hosts, most recently with Tucker Carlson when she compared Trump to Hitler.

RefuseFascism.org is a nationwide movement that unites people of many perspectives and from all walks of life who recognize that the Trump/Pence Regime is a fascist regime that must be driven from power through the mass political protest of millions of people. They do this not just for themselves, but in the name of humanity.