What: #HolidayGatheringsAgainstTrump
When: STARTING NOW 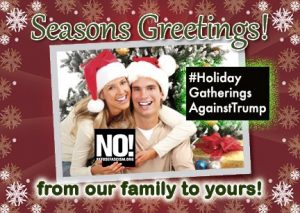 Trump is assembling a regime of grave danger. If you are horrified, if you are feeling terrified about this regime of fascism, you are not alone. There are tens of millions who feel the way you do. Our mission right now must be to find our courage and act decisively, not prepare to survive or attempt to survive the fascism that is coming but to act with every fiber of our being to stop them from coming to power.

There IS A PLAN TO do this, go to refusefascism.org and get into the plans for a month of resistance to stop Trump/Pence.

As part of this plan, you are needed to spread word about this widely today:

On December 24 and December 25, must give heart to millions by SAYING NO! at your family holiday gatherings. By doing this we will the breadth of people who DO not want Trump to be president and who will act to stop a fascist America.

Today, call on thousands of people to take pictures of with their families at holiday gatherings with signs that say NO! If you have a family of Trump supporters, grab the progressive ones and you can do one together.

Or do one by yourself and make a donation to refuse fascism in the name of your racist uncle.

No matter who you are or where you are, be part of a community of resistance during the holiday.

And get ready for New Year’s Eve, to steal the headlines of the world.

You can steal these tweets! Add the NO symbol and tweet to people who have large followings. Or make your own to popularize this on the holiday. NO! graphics can be found here!

On Christmas Eve and Christmas day, be part of #HolidayGatheringsAgainst Trump. Take a picture at your family gathering with NO signs!

Download your no signs here! Or make your own. Take a pictures with you & the fam & post using #HolidayGatheringsAgainstTrump

I’m participating in #HolidayGatheringsAgainstTrump because I can’t be silent or let anyone sit on the sidelines & let fascism come to power.

Calling on thousands of people to participate in #HolidaygatheringsAgainstTrump because we have to speak up and raise our voices NOW!