Sign, circulate, and act on this statement, inspired by refusefascism.org:

Historically, the university has been the institution where dissent and critical thinking have had the greatest initiative in society. It has helped incubate social movements— like antiwar and civil rights, women’s liberation and environmental. This vital role must be defended from fascist assault— and is needed more than ever.

The weekend of January 21st, millions in the U.S. and around the world marched to register their revulsion at the Trump-Pence regime. That same weekend the Trump-Pence regime pushed aggressively forward with its fascist agenda: an inaugural speech of chauvinistic and war-mongering “America first,” then attacks on the press, followed by ominous declarations that this will be a “law and order” administration. What will come tomorrow?

The Trump-Pence regime threatens to bring catastrophe to humanity. We must expose the truth about the Trump regime, build resistance, and continue to demand its impeachment and removal.

We call on fellow academics and intellectuals to join the millions in the U.S. and around the world who have taken to the streets to oppose hate, racism, sexism, other forms of intolerance, dishonesty, and the authoritarianism of the Trump regime and its allies. Faculty and students must be encouraged to speak freely, in and out of class, about the dangerous character of the Trump regime. We must stand in solidarity with professors “named” and threatened for their progressive or radical views by the rightwing “Professor Watchlist” and other enforcers of the new McCarthyism.

The university must become a zone of resistance— a site of “NO” to fascism in America—and a haven of dissent, critical thinking, and free speech… and for upholding civil and human rights and liberties… and fostering society-wide resistance to this regime.

—Organize teach-ins and walk-ins, inviting students and others to come and speak up. Create new spaces to address this social emergency.

—Classes and curriculum should reflect that we are facing a social emergency. Classes can become forums to discuss everything from what fascism is and the lessons of history, as in Germany… to Trump and the attack on civil liberties, women and LGBTQ, Black lives, immigrants, and the environment… to what this fascist agenda bodes for the university itself. Put “NO!” posters on blackboards and windows— and make them available to colleagues and students.

—Be part of marches, demonstrations, and a visible presence on the streets and other public places.

—Support and join with students who are organizing and engaging in resistance to the Trump regime. Stand with immigrant and Muslim students and professors, as well as outspoken professors, who are targeted and attacked. The movement for “sanctuary campuses” must expand, and pledges by administrations to protect undocumented students must be upheld no matter the pressures and orders.

—The university community must find the ways to make common cause with, and invite into the community, people from all of walks of life who are resisting.

In these dark times, the resistance we mount can contribute to bringing a far better world into being.

“What is Fascism”—From the Call to Action issued by RefuseFascism.org

Fascism foments and relies on xenophobic nationalism, racism, misogyny, and the aggressive re-institution of oppressive “traditional values.” Fascism feeds on and encourages the threat and use of violence to build a movement and come to power. Fascism, once in power, essentially eliminates traditional democratic rights. Fascism attacks, jails, even executes its opponents, and launches violent mob attacks on “minorities.” In Nazi Germany in the 1930s and ’40s, fascism did all these things. This is where this can go. And yes, Hitler himself could “talk graciously” when he felt it would serve his interests and lull his opponents. 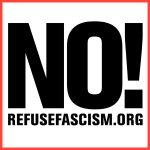