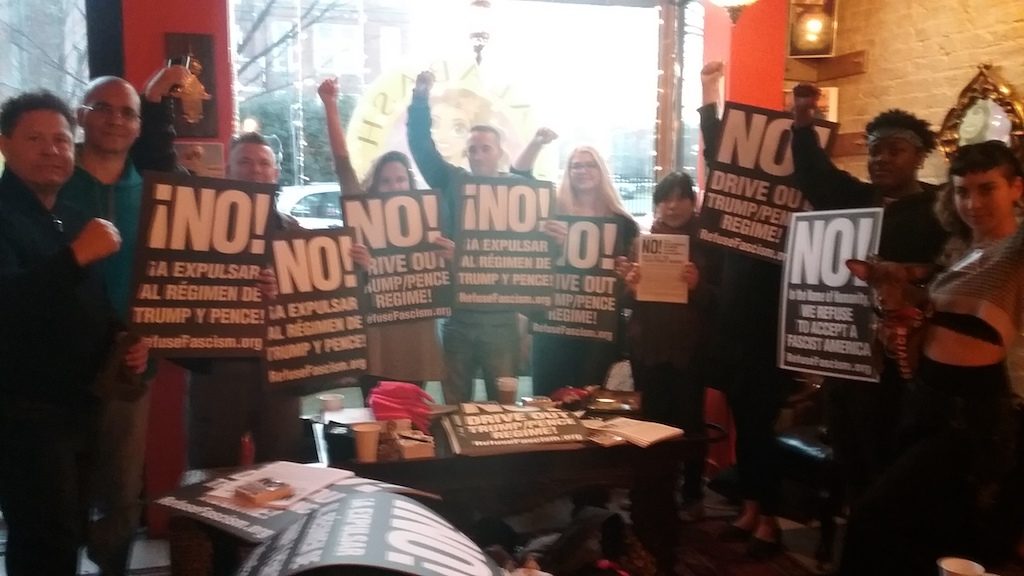 Wednesday, February 22 – About 50 people packed a room in New York’s LGBT center for an enthusiastic sendoff to Refuse Fascism’s “Drive Out the Trump/Pence Regime” Tour. The aim of the Tour – nothing less than organizing people across the country to rise to the challenge of driving the fascist Trump/Pence regime from office – quickly.

This Tour is happening at a moment when the stakes for humanity and the planet could not be higher. As the Announcement of the Tour says, “The Trump/Pence Regime is a Fascist Regime. Not insult or exaggeration, this is what it is.  For the future of humanity and the planet, we, the people, must drive this regime out … Fascism has direction and momentum. Dissent is piece by piece criminalized. The truth is bludgeoned.   Group after group is demonized and targeted along a trajectory that leads to real horrors.  All of this has already begun under the Trump Regime. History has shown that fascism must be stopped before it becomes too late.”

The Tour kicks off Saturday, February 25th. The first leg will head out of New York and down the Atlantic Coast, through Philly and D.C., and into the South – North Carolina and Georgia. After that across the deep South and on to Texas. Again from the Announcement, “areas where the two futures for the country and world are starkly contested.”

Some of the people going on the Tour made brief presentations. Their focus was on the two essential points of Refuse Fascism: “This is fascism and must be defeated. And there are millions who can be potentially mobilized to do that.” A young woman who is heading out Saturday said “there are people all over who want to do something about this situation, and we have to, and will, call them forward. We have to. Everyone with a conscience, everyone who gives a damn about humanity needs to be part of this.” Lively discussion and a question/response between people in the crowd and Refuse Fascism organizers followed.

This Tour is a bold and courageous move to bring forth many of the millions who can and must be part of a resolute effort to drive out the Trump/Pence regime. Everyone who can participate or contribute to the success of this Tour needs to do so, and get with others so they do so.

To quote the Announcement again: There are several key ways people can help make this Tour a success: