March 8  Wearing red for A Day Without a Woman and the black that signifies opposition to fascism, the small group of protesters spilled onto Canal Street from Decatur Street, behind a black banner reading “NO! Drive Out Trump/Pence Fascist Regime.”

Cars backed up behind the group as they chanted “women’s rights are human rights,” “the future is female,” “no pussy grabbing, no patriarchy, no fascist U.S.A.,” and other slogans in support of women and against what march organizers say is the authoritarian drift of President Donald Trump and his administration.

On the sidewalk, many people applauded or held up cell phones to record the group. There were heckles (“Sorry, he’s there for good, bye!”), but also shouts of support (“Fuck Donald Trump!”). One man raised a fist and pointed to his red shirt.

Between 40 and 50 people gathered in Jackson Square March 8 to attend the event, which was planned to coincide with International Women’s Day and rallies and marches nationwide called for by the organizers of January’s post-inauguration Women’s March. For A Day Without a Woman, women were asked to demonstrate their economic power by striking from both paid and unpaid work, such as housekeeping or child care; a political tactic that’s been used successfully around the globe (in Iceland and in Poland). 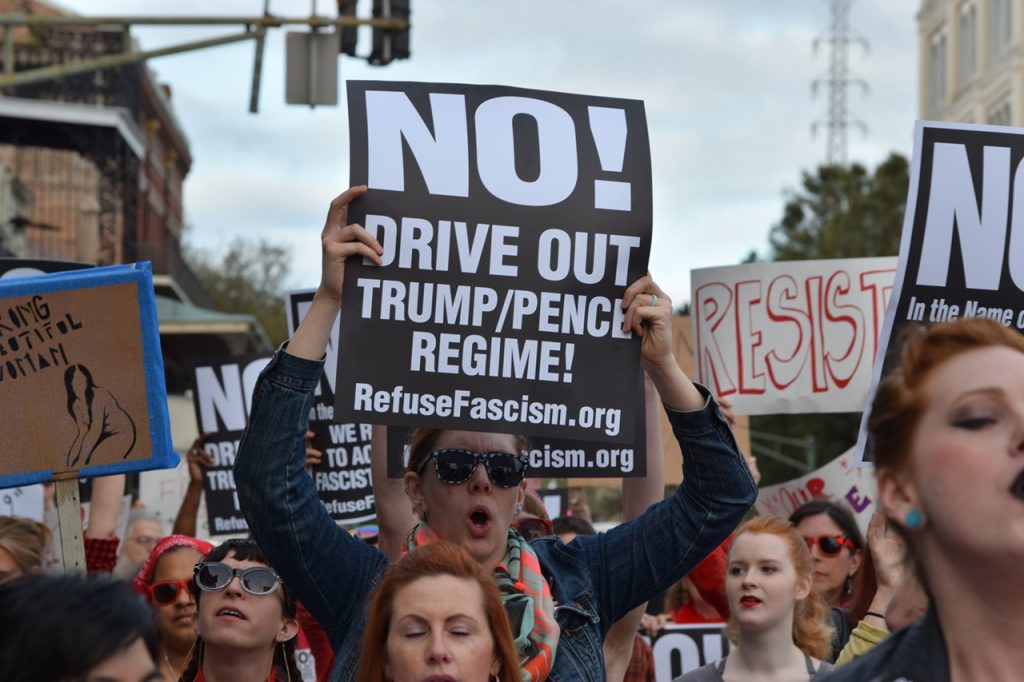 Participants at today’s rally and march were split as to whether they actually went on strike, but unanimous in their desire to keep participating in similar events. Jordan Stephens-Moseley, a Tulane University public health student, went to class today — but says she’ll continue to attend protests and rallies to oppose the administration’s policies.

“I’ve never felt more vulnerable than I do now. It really takes a toll on you mentally and emotionally,” she said. “[But] at some point I realized I really needed to put actions to words.”

Megan Delaune, who helps people connect with grassroots organizing groups, said she’s been incredibly busy since the election. To strike today, she took time off work, signed up to volunteer with women-centric organizations and spent the day with her best female friend.

“It was hard to take the day off … [but other women] did this and it worked,” she said. “You have to remember that you’re part of a movement … to show this administration that they cannot silence our voice.”

Isabelle Guzman, a massage therapist, took the day off from work and had lunch at a female-owned restaurant (an action called for by the organizers of A Day Without a Woman), but says she’s also focused on everyday activism in the Trump era, including conversations about intersectionality (how race, gender and class interact and affect people’s lives).

“How can you have a collective movement if you’re not aware of it on a day-to-day level? … There’s so many conversations that are coming from a place of woundedness,” she said. “I feel if we finally awake to the power of collectivism, that could be really powerful.”

The event was organized by Refuse Fascism, a group that’s been touring the Southern U.S. facilitating similar actions. Organizer Raphael Kadaris said the group opposes what it perceives as the Trump administration’s attacks on the rights of women, transgendered people, people of color and prisoners; climate change science; and the even the principles of democracy itself.

“We thought it was important to manifest resistance on International Women’s Day … [the Trump administration] wants to remake society in the fascist direction,” he said. He condemned both Trump and Vice-President Mike Pence as “misogynist pigs,” describing their apparent intent to restrict abortion rights and Trump’s pejorative comments toward women that have been widely reported in the media.

Anti-fascist groups are sometimes characterized as radical, but today’s protest showed their commitment to engagement. Organizers handed out pamphlets and urged bystanders to join the march (a few did), and they took over the street to march peacefully, without a visible police presence facilitating the action.

As the march returned to Jackson Square and opened the floor to speakers for a concluding rally, a man holding a beer tried to shout down organizers and take control of the mic to voice his support for Trump. Protesters surrounded him, and he begin to shout more forcefully, calling them “dumb” and “stupid.” A young woman turned her back to him and used her body to push him away from the circle. When he resisted, she knocked his beer out of his hands, which finally forced his departure. It was a tense conclusion to an event that had otherwise been nonviolent, seemingly triggered by the anti-fascist group’s opposition.

But that doesn’t mean protesters weren’t angry. Daneeta Jackson, a film director, was blunt in her characterization of her attendance.

“I do not accept Donald Trump as my president. He is a fascist and he is a misogynist,” she said. “I’m 51 years old and I can’t believe we’re still fighting for this shit.”

This article originally appeared on the site the Best of New Orleans.com