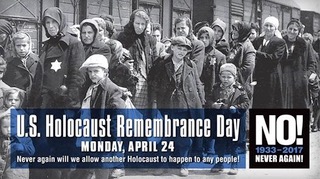 Never again will we allow another Holocaust to happen to any people.

New York, Monday April 24, 3:00 PM Gather Outside the Museum of Jewish Heritage (36 Battery Place), Procession to 26 Federal Plaza
We will wear orange jumpsuits to represent the people forced into ICE detention centers. We will present Homeland Security head John Kelly with the Adolf ICEman Award (Adolf Eichmann was in charge of deportations to Nazi concentration camps). We will present Justice Dept head Jeff Sessions with the Joseph Goebbels (Nazi propagandist) Award for writing about immigrants as “violent … depraved …filth.”

Never again will we allow another Holocaust to happen to any people! Join us at NOON on Monday, April 24, in front of the Loop Synagogue at 16 S. Clark, the synagogue that was defaced with swastikas in February, for a brief rally & speak out. From there we will process down Clark Street to Congress, where we will converge on ICE Headquarters at 101 W. Congress. We will present James Kelly, head of ICE, with the Adolf ICEman Award. (This award is named after Adolf Eichmann, who was in charge of deporting Jews to the Nazi concentration camps.)

Join a Procession from the Los Angeles Sheriff’s Headquarters to the Metropolitan Detention Center (N.Los Angeles St. & Aliso St.) Dressed in the clothing of the concentration camp prisoners, we will present Sheriff Jim McDonell with the Adolf ICEman Award (This award is named after Adolf Eichmann, who was in charge of deporting Jews to the Nazi concentration camps.)  PDF of LA leaflet

Refuse Fascism will be joined with relatives of Holocaust victims and immigrants now under assault by Trump, to present the Adolf ICEman award to an official of ICE to “honor” those today under the fascist regime who are doing the work Adolf Eichman did in Germany under Hitler (see the press release below for more.)