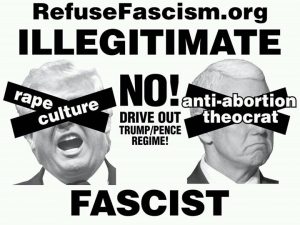 This article originally appeared on the site of Revolution/revcom.us.

As the crisis sparked by Trump’s firing of FBI Director Comey deepens, the possibility of forcing Trump from power is now openly discussed, both by forces in the capitalist-imperialist ruling class and among the masses of people. That could be a good thing, but there is an urgent need right now for growing numbers—ultimately millions—of people to take to the streets and insist that Trump and the whole Trump/Pence regime must go, and stay in the streets until that happens! Otherwise, the Democratic Party, and the “orderly processes” of congressional hearings, FBI investigations, and court hearings will sideline and suffocate the masses and will at best lead to Trump himself being impeached or resigning, leaving the rest of the regime intact, and Vice President Mike Pence at the helm to lead a Christian fascist reboot.

While Trump functions as the leader and front man of a whole regime, Pence has been the main pillar and behind-the-scenes operative. Pence is down with Trump every step of the way, hailing his executive orders, working with Congress to rip health care from millions, repeating Trump’s crazy lies in a calmer manner. Pence proposed a law to deny citizenship to children born in the U.S. of undocumented parents; he backs police suppression of Black and Brown communities through “Stop-and-Frisk” and a stepped-up militarized “War on Drugs”; he denounces protesters against police murder and defends cops as “the best of us.” As warlike as Trump, he boasts that they will “name the enemy” and then “marshal the resources of our nation and our allies to hunt them down and destroy them.”

But Pence is not just a Trump wannabe—he is a leader of a powerful Christian fascist movement that is backed by a major section of the U.S. ruling class and aims for nothing less than a Christian theocratic society ruled by biblical law and morality. These forces believe that the problems U.S. imperialism confronts in the world stem from America getting off of “God’s path,” and that restoring America to “greatness” means reorganizing the government, schools, courts… everything… on the basis of “God’s plan” (as interpreted by them, of course).

In fact, there is no god, and even if there were, the idea of basing the political order of a society on the cruel and bloodthirsty God of the Bible would be horrific. This is shown by the actual program that Pence and the whole Christian fascist movement support. First, their program is steeped in medieval patriarchy, seeing women’s role as fundamentally bearing and rearing children. Pence has such a narrow view of women as either “mothers” or “whores” that he will not eat a meal with a woman other than his wife! More significantly, Pence is a strong opponent of abortion rights, pledging that “We’ll see Roe v. Wade [i.e., legal abortion] confined to the ash heap of history where it belongs.”

This opposition is at bottom about enforced motherhood,which is a form of female enslavement. This is why Pence and his movement oppose all birth control, and want to shut down Planned Parenthood, the main provider of birth control and sex education for millions of women. Pence once claimed (falsely!) that condoms offer “very, very poor protection against sexually transmitted disease.”

The Christian fascists hold to the biblical condemnation of all non-heterosexual sexual expression or identity. Pence opposes same-sex marriage and civil union, and as Indiana governor, he gained national prominence by signing the Religious Freedom Restoration Act, which allowed people, companies, and institutions to discriminate against gays if their “religious principles” called for that.

These Christian fascists also use the Bible to justify the cruelty of mass incarceration and the death penalty, both of which have been used and are being used against Black and Latino people. As Bob Avakian convincingly shows in “The Truth About the Right-Wing Conspiracy…” the “logic of the logic” of their program could lead to full-out genocide against Black people in the U.S. They believe in and promote the idea that a war between the Christian countries and majority-Muslim ones is inevitable, and they tar every Muslim within the U.S. with the brush of their mirror opposites, the Islamic fundamentalist jihadists. All this, they teach their fanatical followers, can be found in biblical “prophecy.”

The Christian fascists have been building their strength for decades. Their network of churches, schools, and media indoctrinates millions in their reactionary and anti-scientific outlook. They’ve taken over hundreds of local and state school boards, working to replace the teaching of the scientific theory of evolution with the religious nonsense of creationism and “intelligent design.” They control governorships and legislatures. They have strong influence in the U.S. military, particularly in the officer corps. A prominent Christian fascist, Erik Prince (brother of education secretary Betsy DeVos), founded Blackwater, a private mercenary army that committed war crimes from Iraq to New Orleans.

Pence himself played a key role in filling the regime’s cabinet with like-minded theocrats who are now wielding their power to further advance Christian fascism. Fundamentalists who think the “day after” pill is murder, that homosexuality is an “abomination,” and that trans people are “crazy” are in charge of public health education; a woman who wants to gut public schools and put kids in Christian academies to train them as unthinking fanatics is in charge of the education department… and on it goes.

The essential point is this—Pence heads a highly organized and very strong fascist current within the regime that is entrenched in the upper echelons of power and connected to a broad mass base, financial base, and military base. If Trump goes but this cabal remains in place, they are well positioned to regroup, remobilize, and carry forward—with a somewhat different tone and playbook, no doubt—the basic fascist transformation of U.S. society begun under Trump’s leadership, but now with a Christian fascist reboot.

This might well satisfy many of the bourgeois forces whose main problem with Trump is not that he’s a fascist, but that he’s a volatile and unstable fascist. But that is not what humanity needs, nor what we should be fighting for. This is why it is necessary for millions of people to get off the sidelines and into the streets, determined to stay there until every remnant of this fascist regime is driven from power.