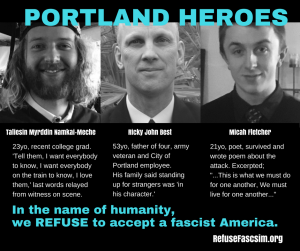 Live Like Them – REFUSE to Accept a Fascist America!

On May 26 in Portland, Oregon, Taliesin Myrddin Namkai Meche and Ricky John Best were stabbed to death and Micah Fletcher was hospitalized for stopping a Trump supporter from spewing racist, anti-Muslim hate at two teenage girls.  These men were heroes!  Live like them!

Every person in this country must ask themselves a similar question: What will be done to Muslims, immigrants, refugees, women, LGBTQ, Black people, people around the world, and the planet itself if we don’t put ourselves on the line to stop the fascist Trump/Pence Regime and the whole tidal wave of xenophobic hatred and racist violence it has unleashed ?

The Trump/Pence Regime has twice tried to ban Muslims, it has ramped up terroristic raids against immigrants, it is destroying the planet, it has given the green-light to police to brutalize and even kill Black and Brown people, it has threatened journalists, threatened the courts, and threatened people who dare to resist.  The Regime is moving fast to lock into place a fascist America.  Egged on by this fascism from above, their hard-core supporters have held KKK/Nazi-style rallies, they’ve threatened lynchings, they are doxxing and targeting thousands who have stood up, and they have begun killing.

Some see all this and think the stakes are too high to speak up. Right before he intervened, Meche himself was cautioned by a loved one on the phone not to get involved. But he did so anyway – and he was right to do so!  The truth is, the stakes are too high not to speak up.  The stakes are too high to wait or “play it safe.”  This applies to individual and “random” acts of bigotry and hatred, but it also applies to confronting and acting to stop the whole fascist juggernaut being hammered down on the people and the world by the Trump/Pence Regime.  Everyone who fears and is outraged by what the Trump/Pence Regime is doing and has unleashed must gather their courage, draw inspiration from Meche, Best, and Fletcher, and LIVE LIKE THEM!  Confront fascist threats and hate wherever they emerge.  As you do, get organized to drive the regime from power.

The truth is, if everyone who opposes the crimes of the Trump/Pence Regime and its supporters stood up like these Portland Heroes did – acting on what you know is right even in the face of danger and risk – we could STOP this Regime and its crimes.  We could DRIVE IT FROM POWER.  We could stop a fascist America.  That is worth fighting for.  It is worth dying for.  Not just for ourselves, but in the name of humanity.