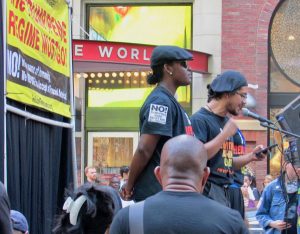 The message of July 15 resounded off the walls and streets of Manhattan, reaching, shaking up, and challenging people. The marchers came from all walks of life, with a wide range of perspectives and outrages, and a common determination to drive out the regime. 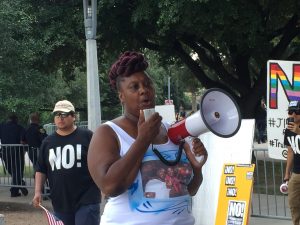 Houston: Facing Down Armed Fascists – and not Stopping Until this Regime is Driven from Power

Here in Texas, there was a mixture of excitement, tension and fear leading up to the July 15th rally and march to demand that Trump and Pence Must Go. About a week earlier, we learned that a group of fascists was​​ coalescing to disrupt our event, and were in fact planning to become an armed presence at all protests to keep the protesters in line. 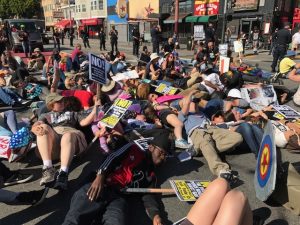 Over 300 people joined the “Trump/Pence Regime Must Go!” rally at the UN Plaza. Then about 240 people marched, starting on Market Street, the main street in this city, and then going into the Mission district along Mission Street to 24th.

Hundreds of protesters gathered at Hollywood and Highland, the site of the Trump Hollywood Star, to rally and march against the Fascist Trump/Pence regime. Fascist thugs came to contest the march, to try to intimidate and silence protesters, and to “defend” the Trump Star. They were not successful. People gathered for two rallies and marched through the street, shutting down Hollywood Blvd., powerfully demanding the Trump/Pence Regime MUST GO! 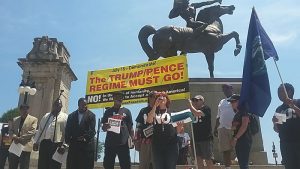 Chicago: March of 100 to
Trump Tower

The march of about 100 went through downtown and to the Trump Tower. It had a big impact—hundreds of people lined the march route, clapping, joining the chants, and taking pictures; some taking up signs and joining the march. There were many different kinds of people on the march who had met Refuse Fascism in different ways—at the Pride Parade, the Climate March, the Women’s March in Chicago, the Handmaids demonstration, the counter-demonstration against the reactionaries who are spreading anti-Muslim hatred in the guise of being “anti-Sharia”; people who saw the July 15 protest on the morning TV news and decided to come join; and some who were just walking down the street.