In the face of the lies, distortions, and outright threats of a relentless fascist social media campaign, headed in part by the acknowledged Trump operative, Alex Jones…

In the face of armed fascist militias in at least three cities, and aggressive cores of fascists in most others…

Often in the face of extremely heavy-handed police presence …

In the face of snark, rumor-mongering and plain old-fashioned McCarthyism, as well as caving to McCarthyism by many who know better…

And in the face of a media white-out until the last few days beforehand – they came anyway.  Sometimes in the hundreds and more, sometimes with just a handful of spirited people, 4000 people in over two dozen cities stepped up as a force determined to STOP Trump/Pence fascism on November 4. 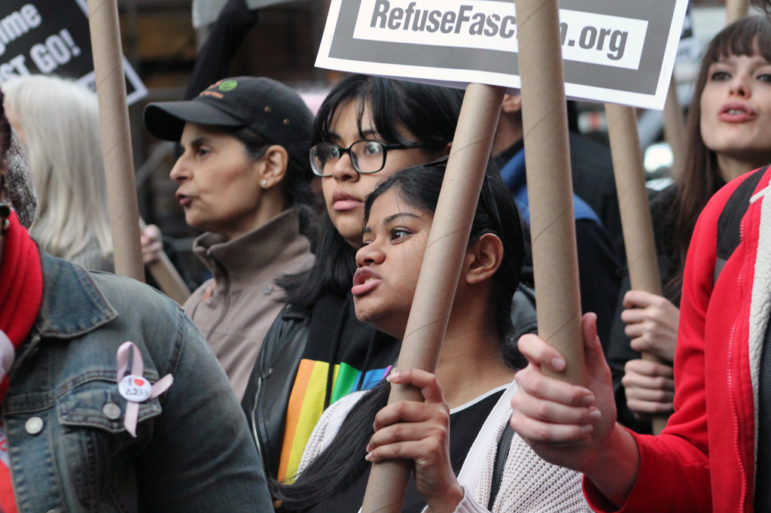 4000 people participated in the activities of the day – from 1500 in New York and a thousand in LA, to 250 in Honolulu and another 300+ in Chicago, to the hearty 2 dozen in Pittsfield, MA, the ten in Indianapolis and the seven in Akron.  In Austin, Texas 45 Refuse Fascism marchers stood up to over 200 armed and taunting fascists, as well as an intimidating police presence that prevented people from entering the march.  Philadelphia was marked by colorful floats and displays and, there too, determined and focused courage in the face of armed and threatening counter-demonstrators.  Boston saw members of Veterans for Peace and Antifa work together with Refuse Fascism to keep things focused on getting out the message in the face of fascist provocateurs.

And in Chicago, a drum corps formed on the spot and beat out a rhythm of defiant joy that made you want to dance.

Those who spoke or sent messages represented the embryo of what is needed to amass the millions in the streets.  This included an ecumenical range of clergy, including Muslims; it included Black, Native American and Latino activists in a number of cities; there were veterans, Cindy Sheehan (the mother of a Gulf War soldier killed in combat who famously confronted George W. Bush) and, in Hawaii, an activist visiting from Korea; statements from activists and artists like Eve Ensler, Arturo O’Farrill and Gloria Steinem were read from the stage; there were environmentalists, members of LGBTQ rights movements, lawyers, and activists from the handicapped rights movement sharing the platform; and there were members of Indivisible or other Democratic Party-affiliated organizations and revolutionary communists.  Musicians and poets graced the stages in many of the cities.

The marchers themselves included parents with children in tow, clusters of students, people from the suburbs and people from the inner cities and projects.  Many were those who have been demonized by Trump, with an especially strong and important showing of immigrants.  Many were from smaller cities, coming together to sometimes even stand against their own families to say NO!, we will not go along with this, we will NOT normalize, we will NOT accommodate.

Students came in ones and twos and sometimes larger clusters: from Boston University, from Wellesley, Berkeley, Stanford, UCLA, University of Southern California, DePaul and Columbia in Chicago, Columbia University and City University of New York in New York,  and many others.  No one knows how many held back in the face of the full-volume rumor and smear campaigns.  A student in Chicago who works at an NGO said the office debated coming, but people “feared violence”; she came anyway (and there was no violence).   There was more than one case where a group of people had planned to come but in the end only one or two showed up.  But because enough people were willing to be first, to step into the unknown, others can now follow… in the numbers that are so urgently needed.

Refuse Fascism refused to cower or be silent in the face of the slander campaign on the one hand and the whiteout on the other.  They combated lies with truth, and aggressively sought out the avenues to tell the real story.  They struggled with reporters, and they raised the money to put an ad in the New York Times.  Too much was and is at stake to let either slander or silence go unchallenged.  By the end, they were able to pierce the fog in a few places and get out the story.

To those who are not fascist and say you oppose Trump, but nevertheless saw fit to attack Refuse Fascism: where is your conscience?  Particularly those of you who sank to McCarthyism and red-baited Refuse Fascism for the presence of members of the Revolutionary Communist Party within it – have you learned nothing from Martin Niemoller, the German minister who, after much delay and dithering, resisted Hitler?  Niemoller, who ended in a concentration camp, said “First they came for the communists, but I said nothing because I was not a communist; then they came for the Jews, but I said nothing because I was not a Jew; then they came for me, and there was nobody left to speak up for me.”

To those who considered and then stood aside, taking the measure of November 4: there is a place for you here.  A path has now been forged; but the times are urgent and the hour is late, and the time is now to begin walking that path.  Whatever the work you are doing now, worthy and important as it is, without massive action in the streets, nonviolent and sustained, demanding the end of this nightmare of a regime, the narrow window now open in which we can prevent the full imposition of fascism will close – clamping down on all resistance, basic rights, and remaking the law.   Now is the time to unite broadly, recognizing the grave danger of nuclear war and of catastrophic environmental devastation, that humanity can not wait. It is only ultimately through the actions of millions of people in the streets in waves of continuing protest, that a great calamity can be averted by the Trump/Pence regime being removed from office.  Now, we must join together with creativity and determination to build up to that point so that thousands become hundreds of thousands and then millions.

Finally, to those who came out: we must, all of us, learn how to do many things we’ve never done.  We must reach out and bring in others.  We must support each other when we falter, when we fear, when we get discouraged… as inevitably we will and do.    We must remind ourselves of the great stakes, and rise to them, with conviction and courage. We must, most of all, constantly remind ourselves and each other and the people we meet and reach out to of the huge stakes before us, and work together to rise to that.  We can, and we will.