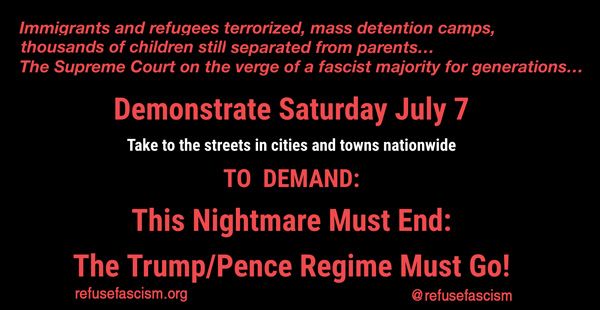 Now in Union Square:
“There is a way to stop a fascist America, take to the streets day after day, night after night..”

. You can find a location near you below. Now is the time to spread the word to everyone you know!Years from now, your kids are gonna ask you, what did you do when you found out immigrant children were being locked in cages? It won’t be enough to say it made you angry or you didn’t like it. We have to act to stop this. And there is a way! This regime could be driven from power by the power of the people.And this is why we are starting demonstrations this Saturday, to raise the only reasonable demand at this time in history: This nightmare MUST end! The Trump/Pence regime MUST GO!
Your are needed to spread the word on social media. There are many people who will join in if they know about it.Can you take some time today to mobilize your networks on social media?Share on Facebook > >
Share on Twitter > >
Share this image on Instagram >>

Ads are now running on Facebook to help spread the word about Saturday’s demonstrations. A generous donor has offered to match all donations up to $4,000 made by Sunday. Help us reach the full match. How much you give today will have a direct impact on how many people we reach and organize right now into the movement to drive out this fascist regime.Donate Today>>Your donation will be doubled!

Take to the streets in cities and towns nationwide

This Nightmare Must End:

The Trump/Pence Regime Must Go!

Pledge to march on July 7

Children torn from parents… concentration camps for tens or hundreds of thousands… threats to bypass judicial process… The assault on immigrants is the linchpin and battering ram of a whole fascist program:

* The Muslim Ban. * White supremacy and terror. * Environmental deregulation as the planet burns. * Open misogyny and theocratic restrictions on abortion and even birth control. * Stripping away rights recently won by LGBTQ people. * 8 million on the verge of starvation in Yemen due to U.S. backed war. * Threats of nuclear annihilation * A thoroughly fascist Trump/Pence Supreme Court for generations.

This is an American Fascism: “Trump/Pence regime’s ‘Make America Great Again’ is a 21st century fascist program of Manifest Destiny – ‘America First’ – wrapped in the flag and Mike Pence’s Bible taken literally, with a program of white supremacy, misogyny, and xenophobia.”

If we allow this regime to get away with caging and torturing children, they know there is nothing they can’t get away with.We must not allow them to pack the Supreme Court and wipe out women’s right to abortion, LGBTQ rights, and more and worse. Every crisis this regime gets through strengthens the regime. This is a shock we cannot normalize.

We – the masses of people – must act to stop this whole fascist program and demand that this illegitimate, immoral regime be removed from power.

This cannot wait until November. The Trump/Pence Regime will not be bound by the normal political process – they are shattering norms, remaking the courts, radically altering the whole political and global landscape. The Democratic Party will not stop this. For them, empire and order is more important than justice, even if that means the order of fascism.

On July 7: Join Refuse Fascism, mobilize your organization or your friends and neighbors and take to the streets across the country to raise the demand: This Nightmare Must End: The Trump/Pence Regime Must Go!

Saturday July 7: When and where…

If you don’t see a protest in your city below, click for advice on how to organize one.

Pledge to be in the streets on July 7