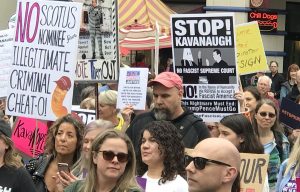 In cities large and small, across the U.S., people joined in actions  protesting the appointment of Brett Kavanaugh to the Supreme Court. The statement from organizers of the actions said, “There’s no doubt: Kavanaugh would rule to gut Roe and criminalize abortion, gut health care, attack voting rights and LGBTQ rights, slash environmental protections, and further damage workers’ and immigrant rights. If the Senators vote to confirm Kavanaugh, they would cement into place the worst and most dangerous of Donald Trump’s policies for generations to come.”

At a number of protests, women spoke out against the woman-hating misogyny of Kavanaugh by dressing up as women in The Handmaid’s Tale—the Margaret Atwood novel and current Hulu series that imagines the kind of future that these fascists are working to bring into being, in which women are totally subservient to men and are looked at as servants and breeders. 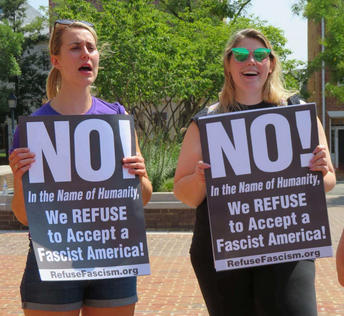 Didn’t make it to a protest and want to contribute? Or you were there … and are looking for a way to help NOW. Here it is: Donate today to get signs, stickers, fliers and more in the hands of thousands this week to #StopKavanagh and build movement to drive out Trump/Pence Regime

Refuse Fascism united with the sentiments of protesters, and at the same time struggled with people to confront the whole reality that with the appointment of Brett Kavanaugh to the Supreme Court, the Trump/Pence regime is poised to impose an extreme and long-lasting transformation of the highest court in this country—a major leap in the consolidation of fascism. This must be stopped!

And that We must put ourselves on the line—through acts of nonviolent political protest and courageous resistance—to stop this confirmation. This was in striking contrast to the prevailing messaging from the stages that channeled people’s outrage into accepting that at the end of the day, the most people could do was try to pressure the leadership of the Democratic Party to stop Kavanaugh (see and share the speech from Refuse Fascism at the rally in Philadelpha below).

AND… Refuse Fascism struggled with people to see why struggles like the one to stop Kavanaugh have to be waged in a way that builds the unity and strength needed to launch a nationwide struggle beginning with tens of thousands in cities across the country that continue day after day and DO NOT STOP until the demand—This Nightmare Must End: The Trump/Pence Regime Must Go!—is met. All who want to fight for a better future need to forge the unity to stop this fascism before it is too late. (Scroll down for Refuse Fascism’s full message to the protests).

From the speech from Refuse Fascism at the rally in Philadelphia

“There is no electoral road to stopping Trump from locking in a fascist #SCOTUS. We must rely on the power of the people not politics as usual.” @refusefascismPH at #UniteForJusticePhilly #StopKavanaugh rally connecting people with plan to drive out the Trump/Pence Regime. pic.twitter.com/Kp6iSD9874 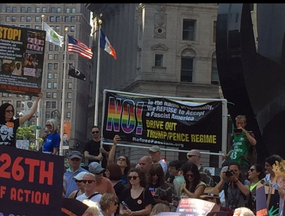 Hundreds rallied in NYC. Many women spoke openly about their abortions and the importance of their right to make that choice, while condemning the “shaming” of women who have had abortions that is all too common today. People also expressed outrage at many other aspects of what the fascist Trump/Pence regime is doing.

Therese Patricia Okoumou, the woman who climbed the Statue of Liberty in early July to protest the separation of migrant families on the border spoke, and challenged others to act in ways that are necessary to change the course of events in this country. 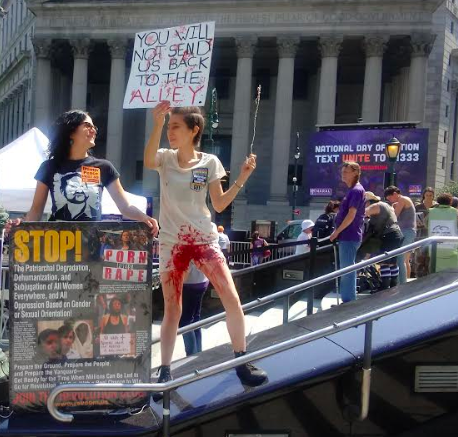 A young woman who wore “bloody pants” to the NYC protest: “I did it to represent all the young women and girls who’ve had to resort to the coat hanger, or the stairs, back alley doctors, all the deaths that could have been prevented, really all the lives that could have been saved, and what all those people could have done with those lives. And it just affects me… I used to think about this; years ago I’d be lying in bed thinking ‘Hey, in a few years these Republicans are gonna get more and more out of control, and one of these days they’re going to try and take away the entire thing.’ And now here we are. People were calling us crazy, and we warned them, and now here we are.”

At #stopkavanaugh in NYC, Many agreed #trumppencemustgo but a few understand elections &indictments won’t do it. To wrangle with this crucial question, be @MarcusGarveyPA this thursday 7pm. RSVP 👇 https://t.co/PilviDpIjy pic.twitter.com/HbYSPyi8kN

Several hundred people attended the official rally. Afterwards, a section of people wanted to take to the street and march, and Refuse Fascism was with them, struggling with people around the need to unite to stop Kavanagh’s confirmation by not relying on normal processes but by mobilizing people in the streets. And Refuse Fascism also got into this being a fascist regime, leading the pledge to resist and large numbers chanting our chants.  Also, several times Refuse Fascism activists spoke about the national attacks coming down on Refuse Fascism Activist particularly highlighting the impending court dates in Los Angeles.

#StopKavanaugh protest in LA, this morning. The FASCISTS Anti-Women, Anti-Abortion fools, came to counter protest and were drowned out with music, dancing & unity against Kavanaugh, FASCISM & the horrifying future they are fighting to implement. #TrumpPenceMustGo pic.twitter.com/BcTW1CxiQA

One protester in Chicago carried a sign that read: “We believe Black Lives Matter, No Human is Illegal, Love is Love, Women’s Rights Are Human Rights, Science is Real, Water is Life. Injustice anywhere is a threat to justice everywhere.”

In Chicago and other cities, so-called “pro-life” (anti-choice) reactionaries who came to oppose and disrupt the rallies were exposed and confronted. Once it was clear who they were, perhaps 1/3 of the rally turned away from the stage and confronted them with chants, “Right to life is a lie. You don’t care if women die” and blew whistles drowning out their chants. Many followed them until they left.”

About 300 people gathered in Atlanta. There was a rally and March to the Georgia Supreme Court. A contingent of Refuse Fascism marched in chanting “Hey, Hey, Ho! Ho! Kavanaugh-Hell No! Hey, Hey, Ho! Ho Trump and Pence Must Go!”

As Refuse Fascism began to set up the Trump/Pence Must Go banner and the Indictment panels in front of Tower City they attacked by a fascist wearing a shirt that read “NO communism”.  He assaulted them, trying to grab the banner and prevent the march from taking place.  Refuse Fascism activists chanted “NO, NO, NO, NO, NO in the name of HUMANITY we refuse to ACCEPT a fascist America!” and called out the urgency to stop the confirmation of Kavanaugh and drive out the whole regime. Many people coming for the rally joined in, and the fascist had to retreat across the street to be mocked by others gathering to stop Kavanaugh. 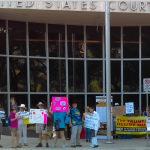 45 people came out to a press conference that quickly turned into a rally outside the federal courthouse in downtown Houston as people chanted “Stop Kavanaugh.”

Several people and groups, including Refuse Fascism, spoke to why Kavanaugh’s appointment represents. 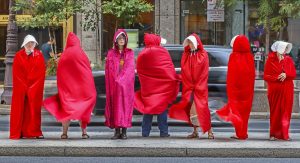 Philly.com reported: “In Philadelphia, more than 200 protesters gathered in the City Hall courtyard to urge opposition to Kavanaugh’s confirmation by the Senate.

“The demonstration was coordinated by more than a dozen organizations. RefuseFascism.org planned marches held before and after the rally. First, reproductive-rights advocates stood in the middle of Broad Street at Sansom in silent protest, dressed in clothing modeled after that worn by characters in The Handmaid’s Tale, a television series based on the best-selling novel about a fictitious totalitarian society where women are state property. The protesters then joined the larger rally at City Hall.”

On August 26 nationwide, RefuseFascism.org brought this message into protests against Brett Kavanaugh:

STOP the Appointment of Brett Kavanaugh to the Supreme Court!

This Nightmare Must End:
The Trump/Pence Regime Must Go!
In the Name of Humanity,
We REFUSE to Accept a Fascist America!

The Trump/Pence regime has already done shocking damage: from Trump’s Muslim Ban to his open encouragement of murderous white supremacists and Nazis; from his flippant threats of nuclear annihilation to his vile misogyny, threats against the media, and even tearing immigrant children from parents. If left in power, the Trump/Pence regime will effect a thoroughly reactionary restructuring of society. Nothing short of removing this entire regime will stop this nightmare. (From the RefuseFascism.org Call to Action)

Now, with the appointment of Brett Kavanaugh to the Supreme Court, the Trump/Pence regime is poised to impose an extreme and long-lasting transformation of the highest court in this country—a major leap in the consolidation of fascism.

This must be stopped!

It’s not just that Kavanaugh would eviscerate women’s fundamental right to decide for themselves whether to bear children, which alone would be reason enough for millions to rise in massive political revolt. With Kavanaugh, the Supreme Court would be a rubber stamp to the whole Trump/Pence agenda: shredding the separation of church and state in favor of Christian fascism against women, LGBTQ people, science, and the environment; backing xenophobic ethnic cleansing of immigrants and terror against Black people to “Make America WHITE Again”; eviscerating civil liberties, the separation of powers, and the rule of law; unleashing even more vicious torture and military aggression against the people of the world.

The time to act is NOW—this nomination must be STOPPED! If Trump is allowed to consolidate a fascist Supreme Court, we will be fighting on much more difficult and dangerous ground. And if this goes down without a huge social battle to STOP it, we will be fighting under conditions where accommodation, not resistance, has greater initiative.

We must put ourselves on the line—through acts of nonviolent political protest and courageous resistance—to stop this confirmation.

Most of all, we must do this in a way that builds the unity and strength needed to launch a nationwide struggle beginning with tens of thousands in cities across the country that continue day after day and DO NOT STOP until the demand—This Nightmare Must End: The Trump/Pence Regime Must Go!—is met. All who want to fight for a better future need to forge the unity to stop this fascism before it is too late.

WE PLEDGE that we will not stand aside while there is still a chance to stop a regime that imperils humanity and the Earth itself. Join us. Let’s stand together with conviction and courage, overcoming fear and uncertainty, to struggle with all we’ve got to demand: The Trump/Pence regime Must Go! (From the RefuseFascism.org Call to Action)

NO! In the Name of Humanity, We REFUSE to Accept a Fascist America!