To endorse or partner with Refuse Fascism on the protests following the mid-term elections, email [email protected].

Organizing materials for November 7 and 10 here

in nationwide mass organizing, mass fundraising to build our strength. 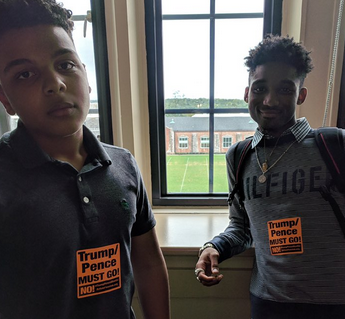 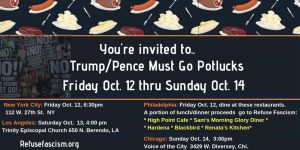 Philadelphia: Fed Up! Dine out to drive out the Trump/Pence Regime, Friday October 12 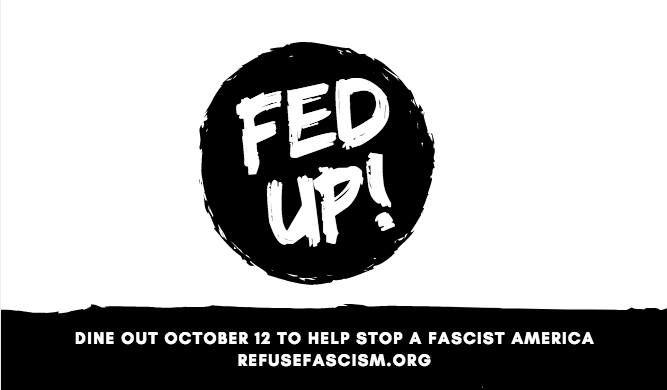 Philadelphians can strengthen the movement to drive out the Trump/Pence regime just by going out to dinner (or lunch) at your favorite restaurant or getting coffee at your favorite coffee shop. So far, three of Philadelphia’s finest establishments are taking part in the FED UP fundraising event. A percentage of sales will be contributed to RefuseFascism.org to support determined struggle of the people that doesn’t yield and compels the removal of the Trump/Pence regime. Details at Facebook Event page.

Sunday October 14: We will make plans for Sunday canvassing on Saturday.

Saturday Oct 13 and Sunday 14, 10am to 6pm: Volunteer in Manhattan, Brooklyn and Harlem.  Sign up and we will send you the meet up times/locations for your area

Friday October 12, 4:30-6:30pm: UW Dorm “pop up” outreach and art installation (on the theme of immigrant children and families being held in detention concentration camps and how it’s the battering ram of a whole fascist program of the Trump/Pence regime). In front of Elm Hall, corner of NE Campus Pkwy and Brooklyn Ave.

Saturday October 13, 6:30pm: Whole Foods intersection at Denny & Westlake, pop-up outreach/fundraising with light projection on the steps of Whole Foods or on the ground in front of the entrance.

Donate NOW to fund the only organization with the vision and viable plan to drive out the Trump/Pence regime through non-violent, sustained mass resistance.

Volunteer to be one of hundreds to take up a coordinated four day nationwide campaign to organize hundreds of new people into, and to put before hundreds of thousands more, the only viable vision and plan to stop the nightmare of the Trump/Pence regime and to raise the funds to make the kind of struggle needed a reality.

What is this plan to stop this nightmare? Get in position at the soonest possible time to launch a sustained and growing movement of nonviolent political protests that start with many thousands and come back day after day, night after night, eventually growing to millions and not stopping until this demand is met: This Nightmare Must End: The Trump/Pence Regime Must Go! Only through such a massive, nonstop, and growing nonviolent movement like this can we create the kind of political crisis that can compel the removal of the Trump/Pence regime.

Why is this the only way? Because we are being ruled by a fascist regime which has spent nearly two years terrorizing Muslims and immigrants, encouraging violent white supremacy, eviscerating norms, remaking the courts, pouring gasoline on the fires of global climate change, escalating the threat of war – even possibly nuclear war – assailing the rights of women and LGBTQ people, and much more. This regime cannot be waited out, it will not be bound by traditional norms or the rule of law. It will continue to absorb separate acts of resistance and obstacles while barreling forward with its genocidal program until it is driven from power.

Shouldn’t our main focus be on the midterms? No! As we say in the RefuseFascism.org Call to Action: “If we think that the normal processes of the 2018 or 2020 elections, or the Mueller investigation will, by themselves, redress the situation that humanity faces, we are not understanding the determination of these fascists in power to shatter norms – even though they have been doing so for over a year.” The Democratic Party leadership is not even publicly acknowleding the depths of the horrors Trump and Pence represent for humanity, or even claiming to be willing or able to dislodge this fascist regime. That will be the case until there is determined struggle that doesn’t yield and won’t be provoked that can create a serious political crisis. Under those conditions, those in power who are themselves now under attack by the regime but conciliating with it would be compelled to respond to our struggle from below, leading to a situation where this illegitimate regime is removed from power.

How does this weekend organizing blitz contribute to getting in position to drive out the Trump/Pence regime? Most people have not yet heard of the plan to stop this nightmare by driving out the regime, and far too few people are trained as organizers for this movement. Through this weekend, we will make a significant leap in transforming this – organizing hundreds of new people to work together to reach hundreds of thousands of more people with the vision of, and the role they can play in, driving out the Trump/Pence Regime. A major focus is fundraising – and unleashing a movement of fundraising – to enable us to take this movement higher. It will take millions of dollars to accomplish our mission. Hundreds of thousands are needed in the next period to spread our message and field organizers.

How to start planning? In planning this weekend, we should proceed from what’s needed to make a real leap in the level of organization and social movement around the demand that the whole regime must go and we must put this need and vision before all the people who should be a part of this.

Wherever you are, whoever you are, if you are working with a chapter of Refuse Fascism or far from one; if part of an organization, or not; if you’ve been involved in activism before or this is your first time in the water, you can play a critical role in making this happen.

The glue is the Refuse Fascism Call to Action. This extraordinary piece pulls together a comprehensive assessment of the danger posed by the Trump/Pence Regime, takes on the many illusions that prevent people from acting in a commensurate way, and lays out the only viable vision and plan to end this nightmare by driving out the regime. Read it. Sign it. Share it. Discuss it. Warm up for mid-October by beginning to get it out to people you know and enlisting them to be part of the all-out blitz in mid-October.

Also key are the slogans:
This Nightmare Must End: The Trump/Pence Regime Must Go! In the Name of Humanity, We REFUSE to Accept a Fascist America!

Read them out loud – now. Then find someone else to read them out loud to. These slogans break down what’s going on and what needs to happen like nothing else! And as you discuss these with others to get organized to be part of the mid-October push.

Sign up here, now to be involved! And stay tuned, here, for updates on plans.