@realdonaldtrump is on his way to becoming the uniter-in-Chief on an issue that has divided America for generations.”CNN commentator Van Jones

In many respects, we’re getting very much tougher on the truly bad criminals – of which, unfortunately, there are many.”Donald Trump.

When I heard the news a few days ago that Trump endorsed the First Step Act, a bipartisan criminal justice reform bill, I thought of Malcolm X’s famous point that if you stick a knife in nine inches and pull it out six inches, you can’t call that progress. 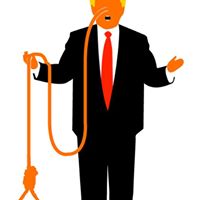 From reading and watching the news, for example this New York Times article, “Trump Embraces a Path to Revise U.S. Sentencing and Prison Laws, one would never know that Trump has ever said or done a racist thing in his life. Apparently they didn’t think it was worth reminding people that this was the same Trump that in the past week verbally abused two Black female reporters, or that he put out a campaign ad that was so racist even Fox “News” wouldn’t air it. Not worth remembering that this was the same Trump who urged police officers not to be “too nice” when they’re arresting people, who called torch-carrying white supremacists “fine people,” who calls himself a nationalist, used the words “rapists,” “animals,” “shitholes,” and “invasion,” to whip up a lynch mob mentality against immigrants, and leads a regime full of white supremacist Christian fascists.

There are so many more examples of what Trump does and says to demonize and criminalize Black and brown people. Yet the New York Times is fine with you forgetting all this, and Van Jones, when asked if he should really trust someone so racist, said trust is something you put on a dimmer switch, not something you turn on and off.

I don’t know everything that is in this legislation. There is some reduction of mandatory minimum sentences, some leeway for judges to bypass mandatory minimums, prohibition of horrific shackling of pregnant women, a chance for prisoners to earn “good-time credits” and participate in skills training. Perhaps a few thousand people could be helped, but it only applies to the federal prison system, which holds about 200,000 prisoners, while 87% of the prison population of 2.2 million is held in state prison systems. It also does not apply to undocumented immigrants or immigrants held for non-violent immigration offenses. They say the road to hell is paved with good intentions. The road to fascism is too.

The fact is this legislation is just meaningful and meaningless enough for Trump to get behind it. His caveat was that “truly bad criminals” will face even more severe punishment. Trump loves to talk about truly bad criminals. Like the Central Park 5 (Black and Brown youth unjustly convicted of rape of a white woman in NYC in 1989 — Trump ran a full page ad demanding the  death penalty for them). Like women who have abortions after Roe v. Wade is overturned. Like the Muslims he has banned from the country.

Recently, I came across a video of a dog trying to grab a bone out of his water bowl. Only it wasn’t a real bone, just a picture of a bone cruelly placed at the bottom of the bowl. The poor dog tried and tried to extract the bone, prompting his owner to post a video on twitter with the caption, “fucks sake, Gary.”

Well, who can blame Gary? He’s a dog.

But we should know better than to go for that fucking bone.

I can hear all the Trumpists crying, “You see, he’s not a racist!” There were times when Hitler appeared moderate in relation to more violent and undisciplined elements in the Nazi Party and its base, when he had to act against those forces in the interest of advancing the program overall. This was part of the process of normalization and consolidation, buying the German people’s trust and complicity on the road to genocide.

Decades ago, psychologists found that lab animals displayed a desired behavior more frequently and persistently if they received variable, unpredictable reinforcement. If the animal couldn’t expect a reward each time for their desired behavior, but frequently enough to make it keep trying, the behavior was more likely to stick. Similarly, we are in a variable feedback loop of shock and normalization. Shock Shock Normal. Shock Shock Shock Shock Normal. Shock Normal. Each time the shock is not the same. Each time the normal is not the same either. It’s the new normal, something we learned to accept that we didn’t want to accept. The Muslim Ban. A Pro-fascist Supreme Court. Children in concentration camps.

Trump’s endorsement of the First Step Act is from a master class in normalization. We are told to celebrate this “presidential” move, this lie that a few crumbs for a few thousand prisoners is worth everything you would be complicit with in exchange. No one should fall for the logic that this “first step” will lead to a next step that’s better. It won’t. Not under a fully fascist state that is taking over every institution, stacking the courts with fascist judges, even the highest court in the land and emboldening a culture of open white supremacist terror, which is killing people right now. If you want to believe that, then you are well on your way to becoming a good German.

Everyone else who doesn’t want to conciliate with fascism and cares about a future for all humanity, including the victims of mass incarceration, get with a movement that can really stop a nightmare for humanity. Lose your adjustment to this regime. Raise the demand that Trump and Pence must go and act now with all of your determination to build the movement to drive out this regime before it consolidates its power. Our actions will reflect the values of respect for all of humanity and the world we want – in stark contrast to the hate and bigotry of the Trump/Pence fascist regime. The determined struggle that Refuse Fascism is organizing for, that doesn’t yield and won’t be provoked can create a serious political crisis. Those in power who are themselves now under attack by the regime but conciliating with it would be compelled to respond to our struggle from below, leading to a situation where this illegitimate regime is removed from power. This is possible, and it is necessary, not for ourselves alone but for all humanity.