I strongly support the Freeway 9 and UCLA 5 for their heroic resistance! 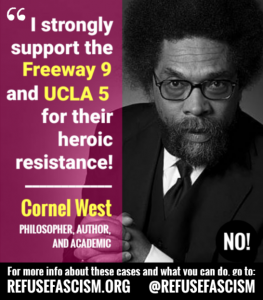 Yusef Salaam, speaker and activist, one of the Exonerated 5 (formerly known as the Central Park Five):

“I stand with the Freeway 9 and the UCLA 5 for their courageous resistance to what is going on in America. We cannot be silent in the face of tyranny.” 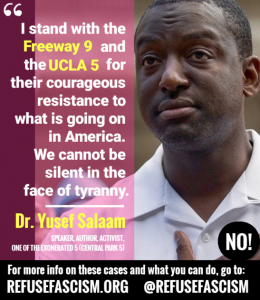 I stand arm-in-arm with the #Freeway9 and the #UCLA5 who are facing criminal charges for blocking the 101 Freeway in the Fall of 2017, and for disrupting a speech by the Trump Treasury Secretary at UCLA in the Spring of 2018. You should too, and here’s why:

We are facing a fascist threat—it’s real, and it’s growing. Each one who resists is a comrade; those who look away or go along are paving the way toward catastrophe.

The fact that American fascism wears a different costume than that which engulfed the world a century ago doesn’t make it any less menacing— or potentially murderous. The autocratic, authoritarian leader who will “solve all your problems” is in place; the mobilization of hatred through deliberately constructed fear and intolerance is full speed ahead; the fueling of violence by demonizing targeted, vulnerable populations is apparent everywhere; and the entangling of a military/industrial/corporate complex that takes over all the instruments of government and destroys the commons is all but complete.

It’s become common to note that when fascism comes to America it will be wrapped in a flag and carrying a cross. In Ernest Hemingway’s For Whom the Bell Tolls, a novel set in Spain in the 1930s, a comrade asks the American Robert Jordan if the US could ever be fascist, or be permeated with fascists the way Italy and Germany and now Spain had become. His response: “There are many who do not know they are fascists but will find it out when the time comes.”

The time has come right here and right now.

We must unite against rising fascism.

Arm-in-arm with the #Freeway9 and the #UCLA5.

Bill Ayers is a longtime activist, he was a Professor of Education and Senior University Scholar at the University of Illinois at Chicago (retired)​

I regret I cannot be with you tonight since so many of my friends, those who are still alive, are in attendance and in support of this occasion. I have been allied with some of them in previous battles to fight Fascism. It should be no surprise that my name appears as a supporter of today’s cause. These courageous people should be celebrated not jailed. May you be successful and curtail the need for such future events.

I applaud the Freeway 9’s dramatic but non-violent protest against the Trump’s crimes that undermine our democracy and basic human rights. Calling attention to high crimes and misdemeanors is vital, and the Freeway 9 put out an alert to Los Angeles motorists which went viral to millions around the country and beyond, of the ongoing attack on our freedoms and values.