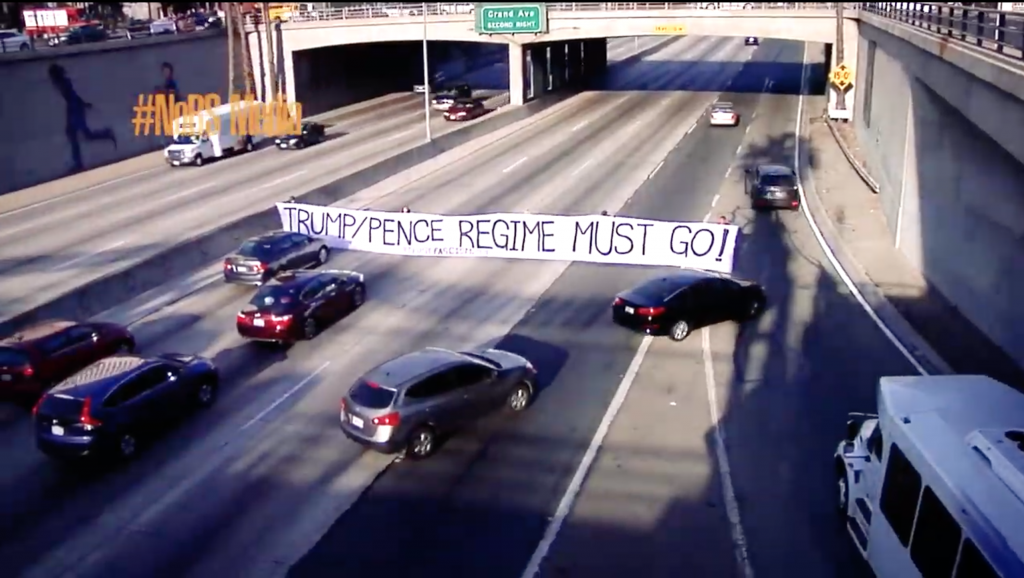 The #Freeway9 are going back to trial – facing up to 3 years in jail for sounding the alarm against the Trump/Pence fascist regime!  These are members of Refuse Fascism and the Revolution Club who blocked morning rush hour traffic on the 101 Freeway in the Fall of 2017 with a 50 foot banner: The Trump/Pence Regime Must Go!

This action was just and these heroes should be thanked and celebrated.  Instead they’ve been criminalized and spied on by the LAPD, facing judicial and prosecutorial harrasment by the LA Democratic City Government.

The defendants were responding to a call from Refuse Fascism – which they’ve issued again with the #OutNow movement – for a sustained, non-violent movement of millions in the streets in protest until the Trump/Pence regime is driven from power.

Two of the defendants already went to trial which ended with a hung jury of 9 voting for acquital!  In a related case, the #UCLA5 went to trial and were just found not guilty.

These charges should be dropped immediately.

Instead, the LA City Attorney Mike Feuer is continuing ahead with these outrageous charges.

There are two important court hearings coming up: Monday, October 21 and Tuesday, October 29, to demand that the charges be dismissed because of selective enforcement and prosecution on the basis of Refuse Fascism’s politics.  We are also demanding that the LAPD reveal the identity of the infiltrator that they sent into spy on Refuse Fascism meetings.

The LAPD and LA City Government are going after Refuse Fascism to suppress any real and meaningful ANTI-fascist protest – when such protests and actions are needed now more than ever.

WHAT YOU CAN DO: