Sarah Roark: Can you imagine?

Imagine how much easier all those ticking clocks will be to beat when we don’t have fascist factotums hanging off every inch of us, dragging us backward and downward. Share the video / read the transcript.

We Must Demand Trump Pence #OutNow or Fear Losing Our Humanity

By Lillian Forman |  The Democrats… seem interested only in protecting the parts of our political system in which they have a stake. Therefore, we, the ordinary citizens of the United States, must stop [Trump] and his supporters. If we don’t, we will… lose our humanity. – Read More

Real Change Is Hard Work: Thoughts on the #OutNow Protests

Beyond Impeachment: Remove This Regime from Below

Impeachment must not be allowed to become what the left group Refuse Fascism (RF) rightly calls “another means by which the millions who hate what is happening become sucked into another waiting game as the Trump/Pence regime terrorizes more people.”  – Read the article in Counterpunch

On Impeachment, and How do we Drive out a Fascist Regime…

Rev. Frank Wulf and  Andy Zee explore how to bring to life the kind of movement necessary to drive out Trump and Pence on the Michael Slate show, September 28, 2019. Share the interview.

Citizens Must Remove Trump From Office

Citizens must remove Trump from office in the name of humanity, both the world’s and our own, otherwise there is no denying the genocide we are complicit in—removing Trump from office is the means for washing the blood from our hands. Read the article in Counterpunch

My mother and Anne Frank were childhood playmates. What if they had been able to grow up together? 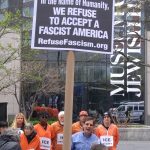 By Scott Gilbert | I hear the slogans and chants that led to the Holocaust: “shithole countries” — “they’re bringing crime, they’re bringing rapists” — “infest our country” — “invasion” — “vermin” — “these aren’t people, these are animals”… Read More