Donald Trump Jr. is on a book tour with Turning Point USA to build a fascist student movement on campuses and to play point man for the fascist regime in power.

Over 120 people came out to reject and protest Donald Jr. and the universities’ role in legitimizing and facilitating white supremacy and the fascist remaking of society, and this whole event was an alarming sign of just how far this is getting.

Refuse Fascism led students and others in a defiant and hopeful message of Trump/Pence #OutNow!  Drums and the #OutNow banners were laid out on the lawn and people picked them up and began to make a huge amount of noise.  Chants got going, whistles blowing, and the protesters grew more and more determined in the conviction that the parade of MAGA (Make American Great Again) hats and fascists who were baring their fangs and true colors on the other side of a barricade would not be allowed to define the future.

For many of the students who attended it was their first demonstration and it was empowering, joyous and defiant.  People learned a new culture – how not to be alone – how to do more than tweet.  They learned what it feels like when you come together with people who care enough to stand up – chanting and yelling and telling the truth – together with people from diverse backgrounds, races and points of view.

The MCs with Refuse Fascism and the Revolution Club kept it clear and focused, why this (the Trump/Pence Regime) IS fascist, why it (fascism in the U.S.) CAN happen here (and in fact it IS happening here!), and WHY and HOW we need to challenge all the “woke” people (including friends, colleagues and family members) who refuse to confront this and act accordingly (to get in the streets in mass, non-violent, sustained protests).

Nick Fuentes, leading the “America First” movement is a Holocaust denier, white supremacist, anti-LGBT Nazi organizing a fascist youth movement who sees themselves as the true fighters for Trump’s MAGA agenda:“Who runs the media? Globalists. Time to kill the globalists. I don’t want to not watch CNN. I don’t want CNN to go out of business. I don’t want CNN to be more honest. I want people that run CNN to be arrested and deported or hanged because this is deliberate. This is not an accident. It’s not, ‘Oh, you know journalists have a liberal bias because they’re educated, and educated people tend to be’ — none of that. It is malicious intent. There is a design, there is an agenda here.”

Fuentes said the manifesto from the El Paso shooter, who killed 22 people mainly Mexican or of Mexican descent, wrote a “convenient manifesto for the powers that be.”  Who are those “powers that be” who would benefit from such a thing?  Those united in having “a problem with white people” and “bringing the systematic destruction of Western civilization and the people that created and perpetuate Western civilization, which is white people.”

“The First Amendment was not written for Muslims, by the way. It wasn’t written for a barbaric ideology that wanted to come over and kill us…  And it also was intended for citizens, not for immigrants…”

The demonstration interspersed chants and loud noise to make the message clear with students and people from the community coming to the mic and speaking out on why they were there.  People testified to what it’s like to be Latino and not know when you come home at night if you will find your family there, UCLA alumni spoke to the shame that this was happening at this university.  People spoke to why they had joined Refuse Fascism and why it wasn’t just Trump but Pence and the whole regime that has to go. Bo Login, an anti-American Iraq war vet and now revolutionary, came to the mic to eviscerate and expose what “Make America Great Again” means to the people of the world.  Michelle Xai followed him to explain to the crowd why all the MAGA fascists on the other side of the barricade were frothing at the mouth and calling him a traitor, what the stand of the Revolution Club was on the American flag and led people in a chant of “1, 2, 3, 4, Slavery, Genocide and War, 5, 6, 7, 8, America was Never Great.”  MEChA  (Movimiento Estudiantil Chicano de Aztlán) led a chant of “Shame, Shame to the University.”  A Vietnamese student from the Southeast Asian student organization spoke about DACA students and led a chant, “Liberation Not Deportations.”  Anarchist students spoke but also took responsibility to shadowing fascist YouTubers in the crowd with loud drumming to disrupt their ability to troll the protests.  A Pakistani student denounced the treatment of Muslims by this regime and the Afrikan Student Union spoke to how the university could not come up with funds for a Black Resource Center but was willing to fund all the security for Donald Trump Jr. and his message of white supremacy—delivering a message to every student of color on campus that your lives do not count.  The advisor for the ASU spoke to how shameful it was that the university administration, faculty and community were not out denouncing this and a student from MEChA concluded with telling all the fascists coming out of the event as it concluded “Fuck You” delivering a powerful spoken word piece.

It was also a very sobering day as people confronted face to face the 400+ MAGA fascists—including a crowd of some of the most virulent who did not get into the event arrayed against the protest with just a metal barricade between them.  Chants competed: “Fuck your border” with “Build the Wall,”  “Humanity First” vs. “America First.”  When Atlas Winfrey talked about this being the 81st Anniversary of Kristallnacht in Nazi Germany, where Jewish owned stores and homes were demolished, windows broken and property seized beginning a reign of terror—the fascists inches away cheered all this.  Black students with the ASU who did not get into the event defiantly made their way through frothing white supremacists to make it into the “free speech zone” where the university allowed our protest.

The Trump Jr. event itself went only 40 minutes of a planned two hour event because it was disrupted by a dispute between Turning Point USA and a faction competing for the allegiance of a rising fascist student movement who are calling Turning Point sellouts because they are not calling for a white ethno state where there are no non white immigrants and not just “legal ones.”  While smug twitter liberals and mainstream publications are tut tutting about Jr. being “triggered” at his own event by people on his side, they are willfully ignoring that this is a disagreement over when to vocalize the full fascist agenda now in power in the White House, how far this has actually gone and how many people are sitting this out and normalizing it.

In fact downplaying the significance and courage of those out sounding the alarm and mobilizing people visibly into the streets to stop a fascist America while there is still time is itself a form of complicity—of propagating the American Exceptionalist ignorance and chauvinism that has people doing nothing, allowing their political activity and horizons to being corralled and  their opposition domesticated by the terms people are being told are needed to win an election and NOT calling this regime for what it is: Fascist in every dimension.

To conclude, the protest organizers kept people together and marched back to the dorms – speaking to students in their windows and then briefly summing up together.  Students shared what it meant to have gone to their first protest and why they decided to change what they were doing, how empowering this was and how they had changed through this. A Latina student mentioned that she was learning a lot in her sociology class about the history of Black people and their fight for civil rights and it was inspiring her to stand up and fight herself.  She said, “I was getting angry, but it was the good kind of anger, the anger that makes you want to get up and do something!”  A UCLA student who’d been on the Santa Monica pier during the fascist attack with bear spray talked about having to overcome the fear of another potential violent assault at this protest.  She talked about recognizing that there won’t be a savior and that it is on us to act to stop this nightmare, even if it means risking our personal safety.  The discussion turned from how we’ve changed ourselves to how we change others.  In wrangling with how to do this, concrete plans were made on how to speak in classes, get posters everywhere and set up car pools for the protest on Saturday, November 16: the fifth Saturday that has been the launch of the #OutNow movement. 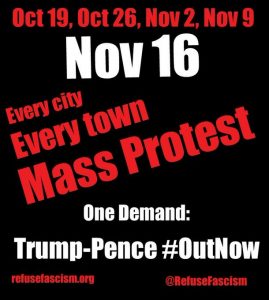 An important element throughout the day was the challenge that kept getting posed to those who were not there, including with the chant: “Don’t tell us it can’t happen here. Don’t tell us wait another year. Trump/Pence #OutNow!”   News of the protest was carried on every local TV station and beyond – an important step to getting the word out that now has to be built on to bring many more people into the street on November 16th and the weeks ahead.