Steve Kerr is the head coach of the Golden State Warriors in the NBA. His father, Malcolm Kerr was killed by members of a Lebanese Islamic militia in 1984 while he was president of the American University of Beirut. 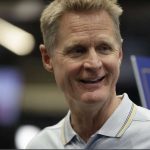 One thing I’ve learned in my lifetime is to not believe our government when it comes to matters of war. Johnson and Nixon lied about Viet Nam. Bush and Cheney lied about WMD’s in Iraq. Now Pence is lying about Iran/Soleimani’s supposed involvement in 9/11. https://t.co/jm3oex867A