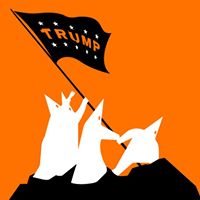 In 1942 a black man named James G. Thompson wrote to The Pittsburgh Courier, wondering whether or not he should enlist in the military and put his life on the line for a country that treated him as “half American.”  His letter kicked off a media campaign known as the Double V Campaign–V for Victory abroad against the Axis powers and V for victory at home against racism.

Many things have changed since the ‘40s but Thompson’s words are as relevant as ever. Religious and ethnic minorities are still treated like dirt in this country. There has been an uptick in violent hate crimes thanks to Trump’s bigoted and belligerent rhetoric. And issues that should be consigned to the past, such as segregation, are still ongoing issues.

Yet minorities are expected to be thankful that they live in America and have any rights at all. The way Colin Kaepernick was treated is a prime example. He took a stand against police brutality by kneeling during the national anthem.

He was nonviolent. He was quiet. And as far as protests go, it wasn’t very disruptive. But because Kaepernick is a black man who dared challenge the system, he lost his job and was attacked over and over again on social media and by the media.

It’s a new year, a new decade, but not enough has changed. And it won’t unless the people collectively agree that they’ve had enough of this shit and rise up and do something. It will not be enough to just drive out the Trump/Pence regime. Trump and Pence were not the start of hatred in America but they have escalated things to a new level. Trump’s words as the leader of the nation have a profound impact not just in America, but worldwide.

He and Pence have to go before they make things any worse. Already Trump has refused to condemn white nationalists such as David Duke of the KKK and the mob from Charlottesville, banned Muslims from the country, limited the number of refugees allowed into the country and condoned violence against a peaceful Black Lives Matter activist.

Removing the duo from power would send a strong message that white supremacy and other forms of bigotry aren’t acceptable and will create an opening to go after other bigots in power and the institutionalized racism that got them in power in the first place.

Driving out the Trump/Pence regime–that is the necessary first step. But the bigotry and hatred they have unleashed will not go quietly.