Just since the impeachment acquittal of Trump he has done the following, every one a major move to further consolidate fascist rule:

The Department of Justice, directed by Attorney General William Barr, directly intervened to shorten the sentence of Roger Stone, convicted of witness tampering and making false statements to the House Intelligence Committee during the Mueller investigation. In the wake this all four government prosecutors quit the case and Trump then congratulated Barr “for taking charge of a case that was totally out of control and perhaps should not have even been brought.” 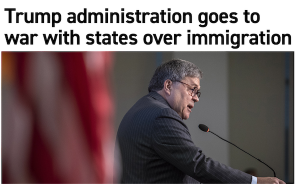 Trump barred hundred of thousands of New Yorkers from enrolling in federal programs that help travelers speed through airport security lines and borders, charging the ban is political punishment for the state’s immigrant-friendly policies: in particular the law which allows undocumented immigrants to apply for driver’s licences and limits federal immigration authorities from accessing records from the state’s Department of Motor Vehicles. 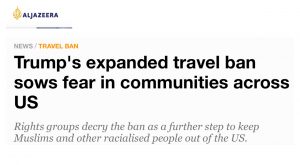 Trump via executive order has broadened what started as a “Muslim ban” to block immigration from six more countries: Nigeria, Myanmar, Eritrea, Kyrgyzstan, Sudan, and Tanzania. More than half a billion people — and a quarter of Africa’s population — are now barred from seeking permanent residency in the United States because of the president’s prejudice, whether against Muslims or people from what he has referred to as “shithole countries”. All this happened without any significant protest. 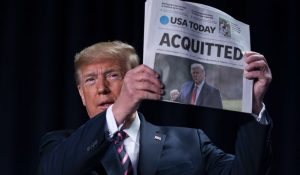 The National Prayer Breakfast, has in the past 68 years been a place where “Republicans, Democrats, national and world leaders … assemble and pray for each other and the nation” (Washington Post “It might be time to suspend the National Prayer Breakfast”).This year right after his acquital in the impeachment trial, Trump waved a newspaper with the headline “Trump Acquitted”, refused to shake hands with one half of the podium where Nancy Pelosi sat, claimed all 3000 people in attendance support him and those who don’t are not genuine Christians.

Trump retaliated and fired people who testified against him exposing his abuse of power during the House impeachment hearings. Those fired included Gordon Sondland, ambassador to the European Union and Lt. Colonel Alexander Vindman who served on the National Security Council staff. Vindman was humiliated, abruptly marched by security out of the White House where he had worked. This is intended to send a clear message to anyone who opposes Trump.

The U.S. government implemented final management plans Thursday for two national monuments in Utah, including the Bears Ears National Monument, that Trump downsized more than two years ago that ensure lands previously off-limits to energy development will be open to mining and drilling despite pending lawsuits.

Despite Nancy Pelosi “extending the hand of friendship” to Trump at the State of the Union, Trump refused to shake her hand. After Pelosi pointedly ripped up the SOTU speech, fascist Congressman Matt Gaetz said he would file ethics charges against her in the House, and Trump said ominously, “First of all, it’s an official document. You’re not allowed. It’s illegal what she did. She broke the law.” In response to White House Press Secretary Stephanie Grisham’s comments that “people should pay” for having impeached Trump, Pelosi said, “They are giving people encouragement to do things. Just like Charlottesville… I don’t even want to go into the target I am because of them.”