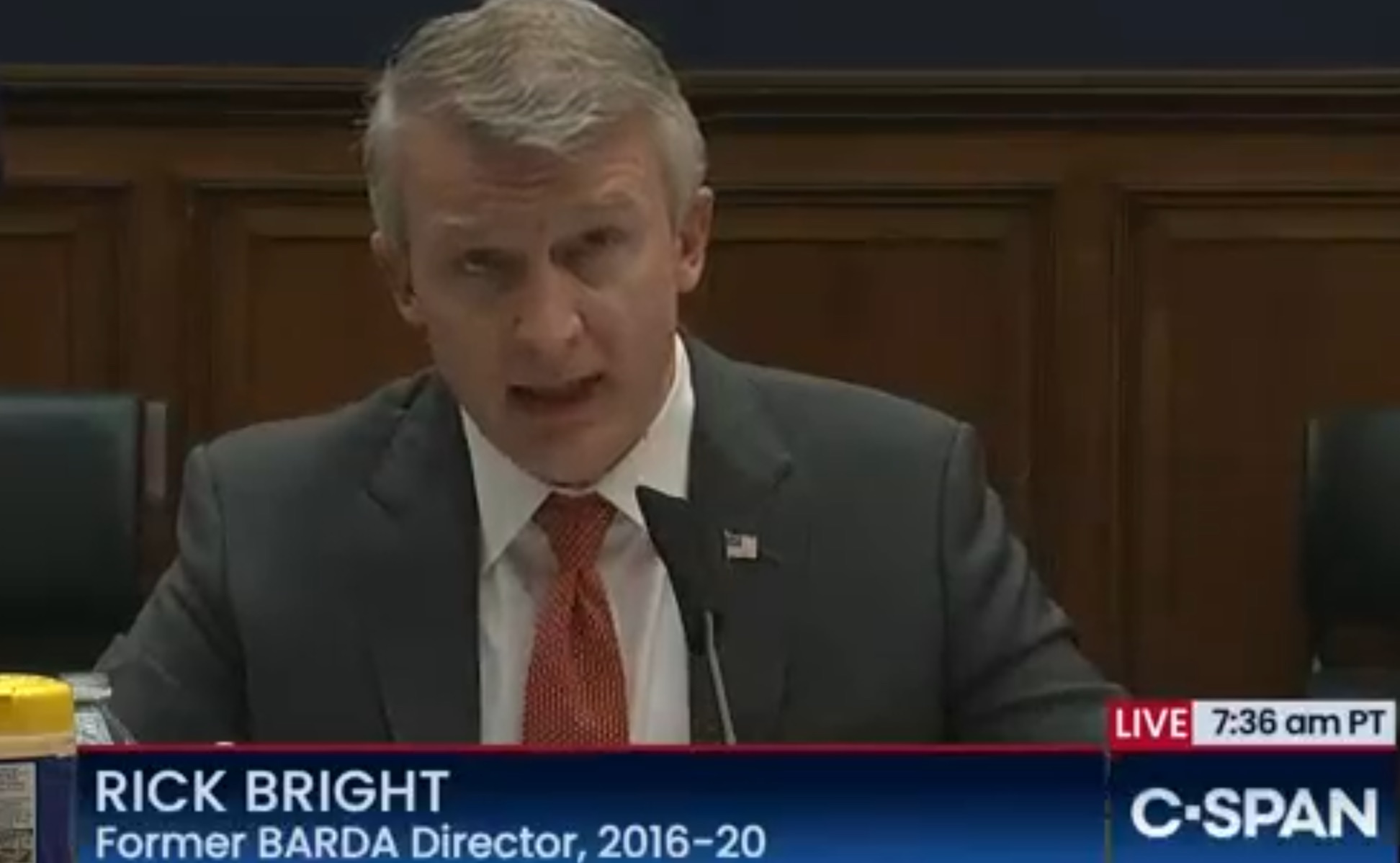 On May 14, 2020, Dr. Rick Bright, an immunologist specializing in drugs, diagnostics, and vaccine development, testified to the House Committee on Energy and Commerce, a Subcommittee on Health with a statement: Scientific Integrity in the COVID-19 Response.  Until April 21, 2020, Bright was the director of the Biomedical Advanced Research and Development Authority (BARDA), a division of the Centers for Disease Control and Prevention CDC), and the Health and Human Services (HHS) Deputy Assistant Secretary for Preparedness and Response. He had spent 25 years of his professional career focused on addressing pandemic outbreaks.

The Trump/Pence regime removed Dr. Bright from his positions for his insistence that the government invest funding allocated to BARDA into safe and scientifically vetted solutions to the COVID-19 pandemic. He said, “I am speaking out because to combat this deadly virus, science – not politics and cronyism – has to lead the way.”   In short, he was, and is, fighting for evidence-based science and the truth.

Along the way, Dr. Bright exposed the non-scientific basis for the use of hydroxychloroquine that was being promoted by President Trump as a magic bullet against the coronavirus.  There is no medical evidence to support Trump’s claim that hydroxychloroquine works, but Trump’s statement caused a rush on the purchase of antimalarial drugs leading to a shortage for patients who need it for other medical issues such as rheumatoid arthritis and lupus, while convincing others to take it incorrectly with the result of increased chance of cardiac arrest and death. Dr. Bright also exposed the pressure he was receiving to award lucrative contracts based on political connections and ignore expert scientific recommendations.

Here are some of the highlights from Dr. Bright’s testimony:

This battle between Dr. Bright, along with others (see statement from Dr. Patrice Harris, president of the American Medical Association), and the Trump/Pence regime is a concentration of the battle between science and anti-science in the midst of the Gordian knot presented by the coronavirus pandemic. This anti-science does not come from Trump alone, but also spews viciously from the Christian fascist movement led by Vice President Pence.

As the Trump/Pence regime is consolidating its fascist form of rule, it seeks to destroy the very notion of objective truth through a combination of conspiracy theories, mythology, lies, misinformation, disinformation, lack of transparency, and bigotry. The result is an anti-science hysteria that is causing death and damage all over the world. Look at how it led to the regime stripping funds for the World Health Organization, with its primary mission to “direct and coordinate international health within the United Nations system” in 150 countries of which many have little to no healthcare.

The millions of us in this country who do believe in science should applaud and thank Dr. Bright for fighting for a scientific approach to solving this pandemic. While we support and thank courageous whistleblowers like Dr. Bright, we also need to face a larger truth; the only chance we have of stopping the further fascist erosion of science is to organize and act now to drive out the Trump/Pence regime before it’s too late.