In the name of humanity, we refuse to accept a fascist America!

More from the protests @refusefascism

NYC – A monument to a white supremacist, rabidly xenophobic, viciously mysogynist fascist tyrant is pulled down from in front of Trump Tower (keep scrolling to see which one)

It’s not complicated. This demand must resound throughout society as people courageously take to the streets:

If you want this to happen, join this chorus & contribute all you can.

That moment when you topple a white supremacist fascist monument of the 2nd Confederate President aka Donald Trump!

In front of Trump Tower on what will soon be known as Black Lives Matter Ave.

Now let’s make it real and drive these fascists from power!#July4th2020 #OutNow pic.twitter.com/zavhDWNieg

.@Carl_Dix says the #Democrats and #Republicans both reside over horrors…. pic.twitter.com/hk2GSBGrWM

At Columbus Circle in #NYC at #TrumpPenceOutNow protest, volunteer is reading from https://t.co/cVmiL2ZaE9 Statement #July4th2020

Also see coverage of the NY actions at AM New York 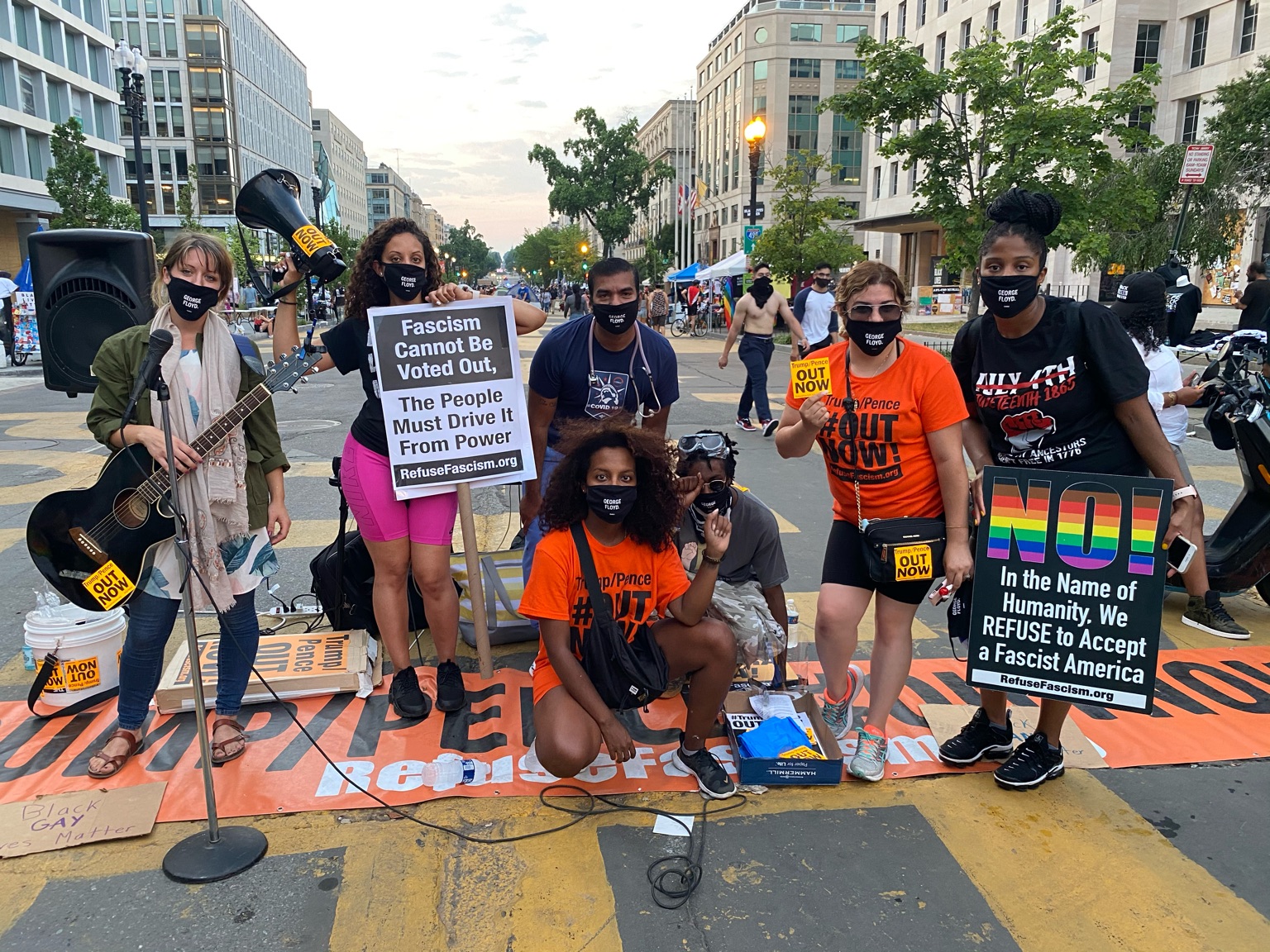 Houston car caravan. COVID-19 is out of control in Houston but people are safely coming out to say This nightmare must end! In the name of humanity we refuse to accept a fascist America!

San Francisco – in the Mission District

Representative of United Native Americans speaks the truth about the Declaration of Independence at Trump/Pence Out Now rally in SF. pic.twitter.com/MqHgGP4CCs

“There is a reason for all this injustice.” Reiko of Revolution Books Berkeley on July 4. pic.twitter.com/DjfwJ8RyVu

Seattle taking the pledge to not stand aside while there is still a chance to stop a fascist regime. This nightmare must end! Stay in the streets & demand #TrumpPenceOutNow! pic.twitter.com/TiOFfpMfRW

Seattle in the streets: Trump and Pence are fascists! There’s no doubt! It’s up to us to drive them OUT! #TrumpPenceOutNow! pic.twitter.com/oF4LV1beEl

An extensive photo essay on the July 4 Black Lives Matter march at Cleveland.com noted the presence of the demand Trump Pence #OUTNOW! 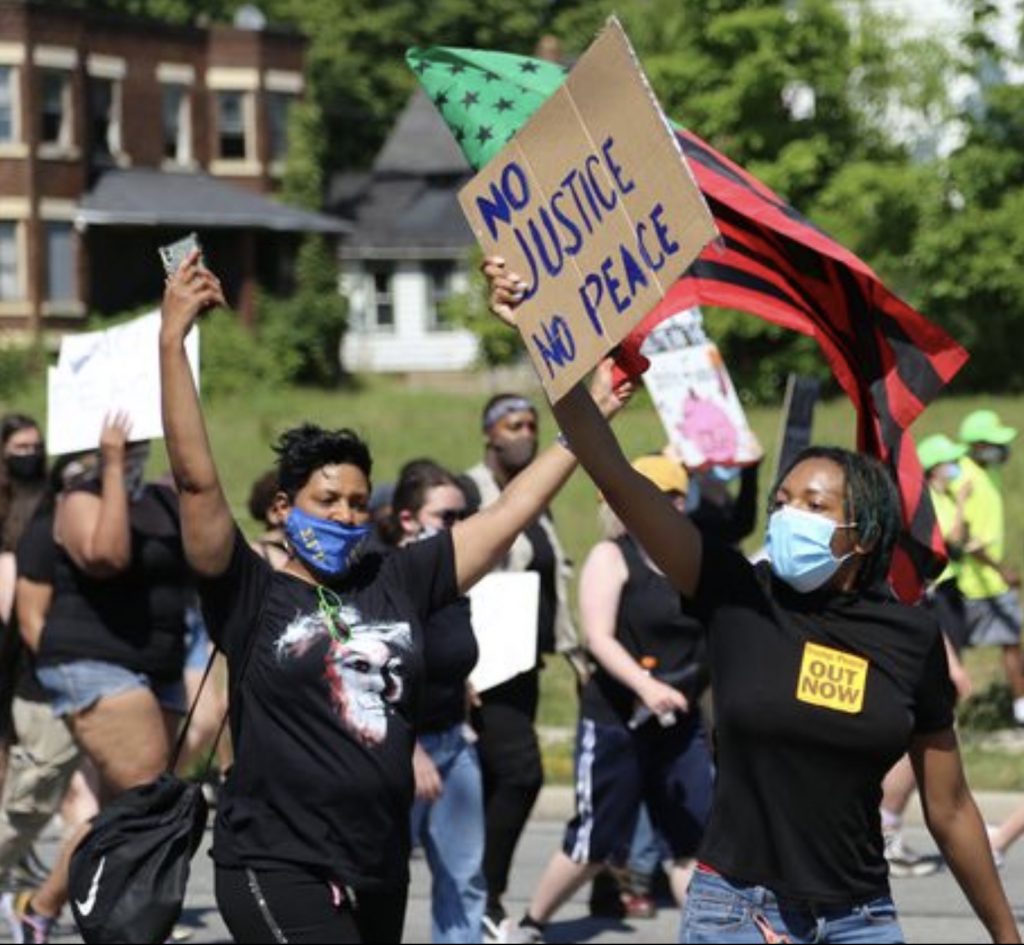 From AM New York coverage:

Hundreds of protesters brandished signs imploring the removal of President Trump from office along with those that read “Refuse Fascism” and “White Silence is Violence.” The march also featured cardboard cutouts and caricatures of the controversial leader.

Before they could even get started, however, members of the protest found themselves in a standoff with American flag-bearing citizens that looked to counter-protest.

While tensions rose, things were eased by a debate on what Independence Day meant to those on hand.

Once on the move, the group made its way to Trump Tower where the protest was contained behind metal barriers across the street, heavily guarded by members of the NYPD.

Per amNewYork Metro’s Dean Moses, who was on hand:

“The group concentrated their anger at Trump Tower, yelling and gesturing at what many see as a symbol of hate. Hoisting up cardboard Trump effigies onto the barricades, volunteers used ropes to tear down the ‘Greatest confederate statue’ in the shadow of his property. The demonstration concluded with Trump’s likeness dragged through the city streets, all the way back to Central Park.”

Read the entire story at AM New York

CNN on 4th of July Protests 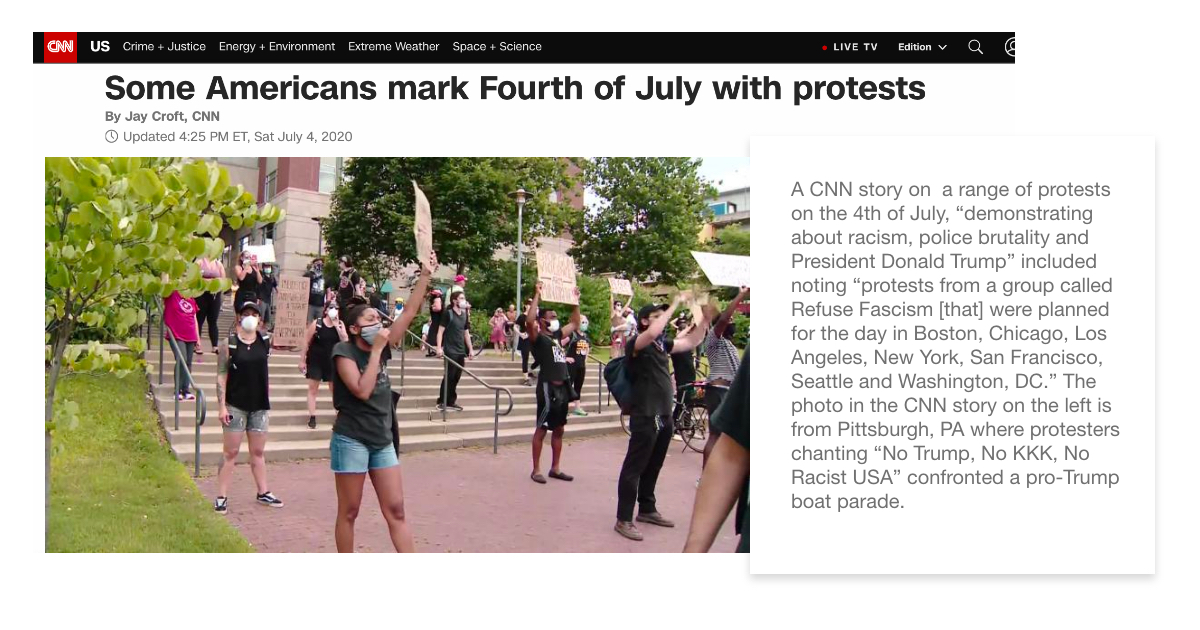