On September 5th we made a LIVING DECLARATION to the world that we are uniting, we are organizing, we are determined, we are preparing to struggle with all we’ve got, starting now and not stopping until the Trump/Pence regime is driven from power and its fascist program brought to a halt.

Some 1,700 people took to the streets in 20 cities across the U.S. on Saturday, September 5, in mass non-violent protest demanding TRUMP/PENCE OUT NOW and launching 60 days of struggle. Hundreds marched in NYC, protesters defied fascist thugs in Houston and Orlando, important voices from the religious community, fighters against police terror, veterans of struggles for civil liberties, and others shared powerful testimony for why Trump/Pence must go NOW.

The message | Diverse Voices | In the streets nationwide | Press

Coverage from the RNL Show

A Second Term Would Be Fascist “Shock and Awe;” Join 60 Days of Struggle Demanding: TRUMP/PENCE OUT NOW!
– Sunsara Taylor

Ted Sirota Flips the Script on Reporter, Nails the Stakes and Strategy for Stopping Fascism

Emma, NYC Refuse Fascism:  “Every struggle – for Black lives, the environment, and more – is threatened by 4 more years. Step up these fights, while demanding together: TRUMP/PENCE OUT NOW!”

Professor Sonia Rosen: This administration is trying to create a world where we cannot protest

Philly telling the world we are UNITING & ORGANIZING for 60 days of struggle to stop a regime that imperils humanity & the earth itself. #Sept5Protests #TrumpPenceOutNow
Sign-up: https://t.co/CEN1y3DzqB
Chip-in: https://t.co/AwpuKHFgP2 https://t.co/oeplsVGwf0

VOICES CALLING FOR 60 DAYS OF STRUGGLE AND TRUMP/PENCE OUTNOW

Jim Fouratt, anti Vietnam War activst, LBGTQ civil rights activist, writer, actor: I have been in the streets since 1965, and this is a very serious moment

“They’re not going to go quietly in the night. We’re going to have to fight really hard these next 60 days. …We have to come together at this vital time in history.” Quanah Parker Brightman of United Native Americans speaking at SF rally for #TrumpPenceOutNow pic.twitter.com/wZ1nTdnEnW

Lamar Whitfield, No More Foundation, Chicago: We all need to unite to get Trump and Pence out of our White House because we are at a NO MORE moment!

NYC: Defend Democracy in Brazil activists call out Trump’s backing for the fascist Bolsonaro regime in Brazil, joining to demand Bolsonaro and Trump/Pence Out Now!

Historian Paul Street: Trump’s law and order is a fascist law and order, we can’t wait til January for him to be out

Nico from the Revolution Club, Chicago: We don’t have to live in a world like this

The Bible Must Not Be a Prop for Evil!
Rev. Michael Woolf calls religious leaders to speak against Trump.

Scenes from around the country


Refuse Fascism called for people to come into the streets on September 5 for a LIVING DECLARATION to the world that we are uniting, we are organizing, we are determined, we are preparing to struggle with all we’ve got, starting now and not stopping until the Trump/Pence regime is driven from power and its fascist program brought to a halt.

Taking the pledge from https://t.co/UKZDDHPyJf with Actor and Activist Jodie Sweetin In the name of humanity, We refuse to accept a fascist America! pic.twitter.com/EoCiMnTEJB

Revolution Club at the Hollywood Star of Trump

Energy is high — so is the temperature! 100+ degrees Fahrenheit in #Hollywood today— people are taking a stand and refusing to accept a fascist America! #TrumpPenceOutNow #Sept5Protests pic.twitter.com/eqXT9HMRLR

Undaunted by Trumpite NAZIs in Houston, responding with “Humanity First, not America First”

@RefuseFascismTX and others joined together today to tell the world that we are uniting and organIzing with all we’ve got to drive out the Trump/Pence regime before it’s too late. This times millions can change the course of history. Follow @RefuseFascism pic.twitter.com/28VRVm3pJY

They say America First, We say Humanity First! Trump has hate, bigotry, & violent thugs, but WE have the hearts of the people! Together we can make history. #TrumpPenceOutNow #Sept5Protestshttps://t.co/S9t1o0u1b9 pic.twitter.com/0LMZeP7QbN

We are uniting, we are organizing, we are determined, we are preparing to struggle with all we’ve got, Starting Now and Not Stopping Until the Trump/Pence Regime is Driven from Power and its Fascist Program Brought to a Halt. #Sept5Protests #TrumpPenceOutNow @RefuseFascism pic.twitter.com/cjcE0zjyr3

Taking the Pledge to Resist in the streets of Seattle

Powerful pledge in Seattle. We pledge that we will not stand aside while there is still a chance to stop a regime that imperils humanity & the earth itself. Millions need to take this pledge. Get plugged in: https://t.co/S9t1o0u1b9 pic.twitter.com/3tnVuZZJLx

Bringing our demand to the White House

Trump shows up at the NYC march 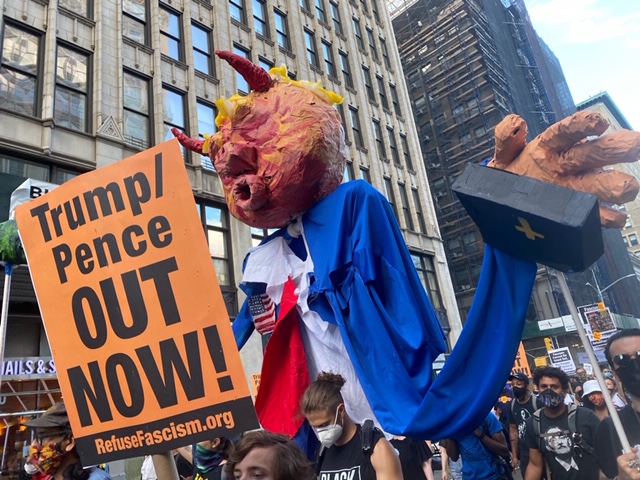 Not backing down in the face of fascist bullies in Orlando, FL

Thank you to @RefuseFascism and Stan Lawrence for extending me an invitation to speak against the current state of this country and condoning the actions being done to our black and brown communities! #WeDemandChange #ChangeIsHere #WeAreTheChange pic.twitter.com/12F0mmT4fi

Cleveland taking the streets Sept 5 – launching 60 Days of Struggle. If the genocidal, white supremacist Trump/Pence regime is allowed a second term the horrors will be unspeakable!#TrumpPenceOutNow pic.twitter.com/LT5S4d9q07

Going into the night in Philly 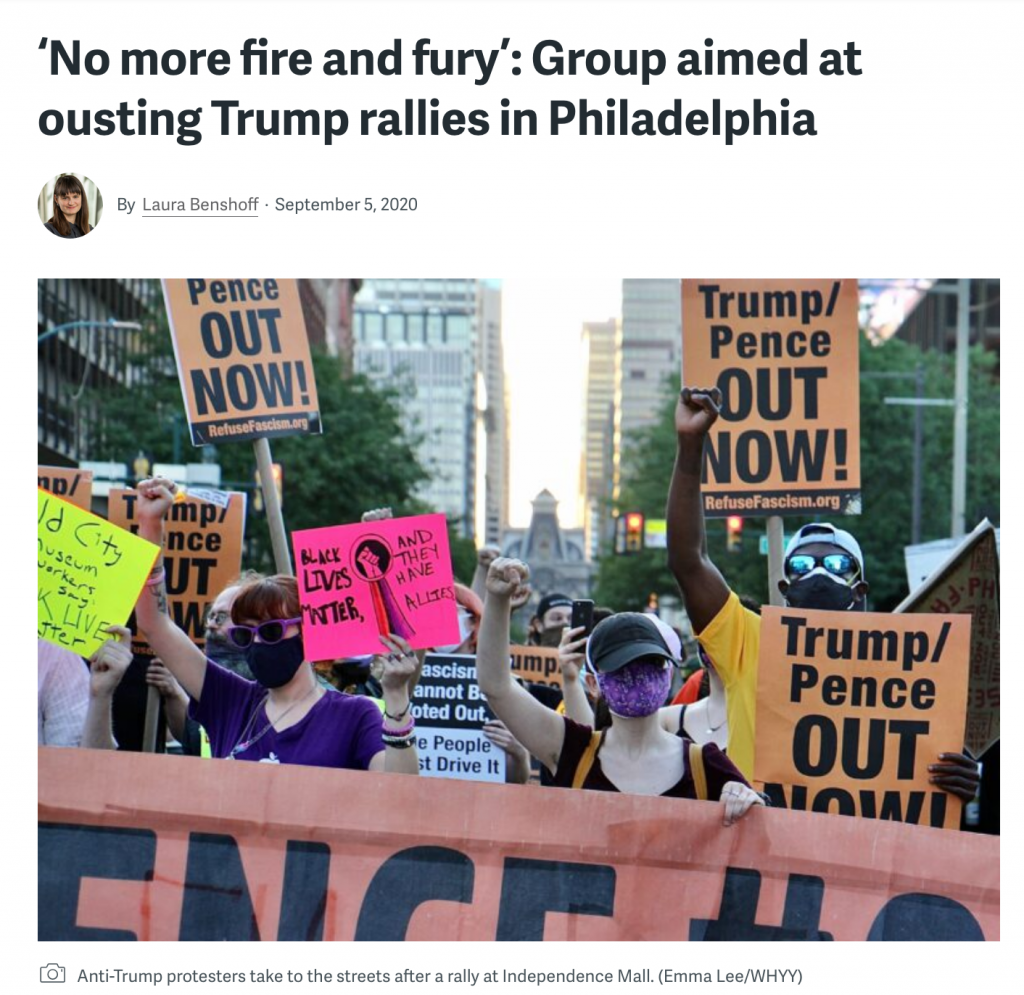 (The NY Times ran a version of a Reuters news agency story syndicated worldwide, the quote from Coco Das is in the Reuters story but was left out by the Times) 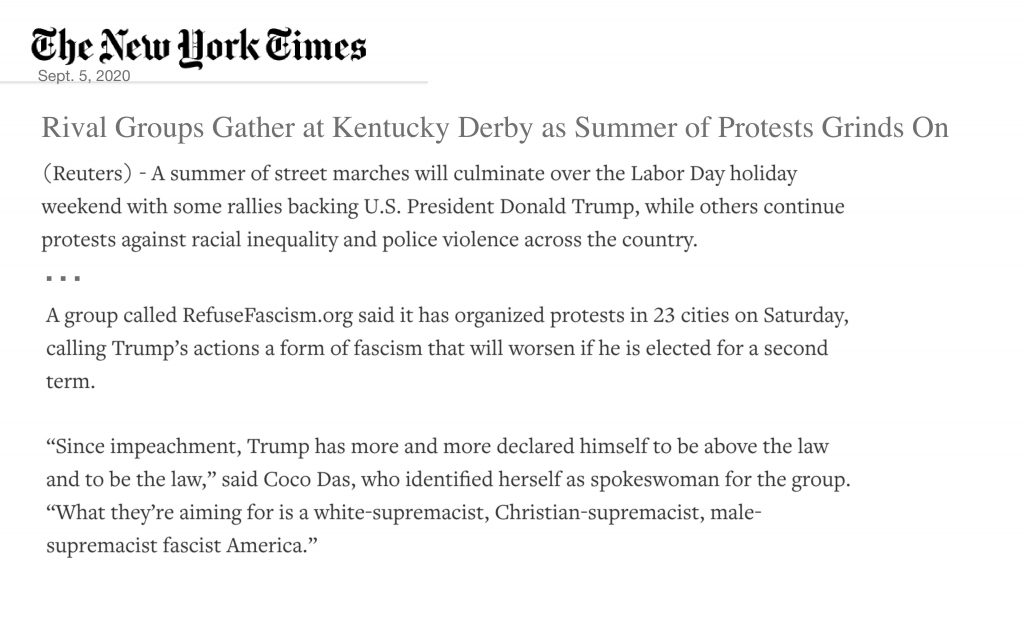 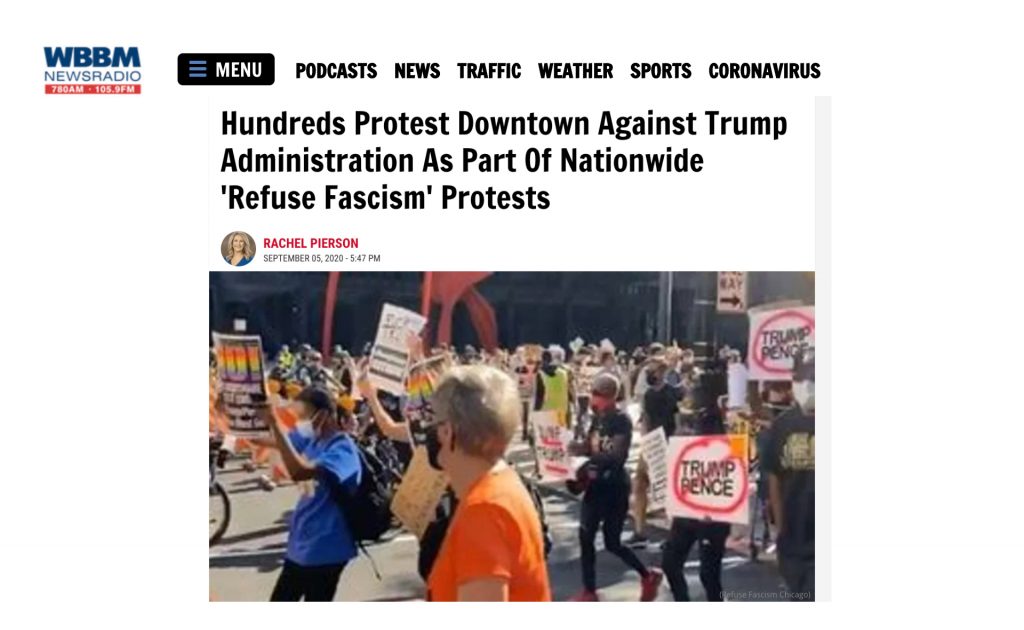 Read / listen to the story 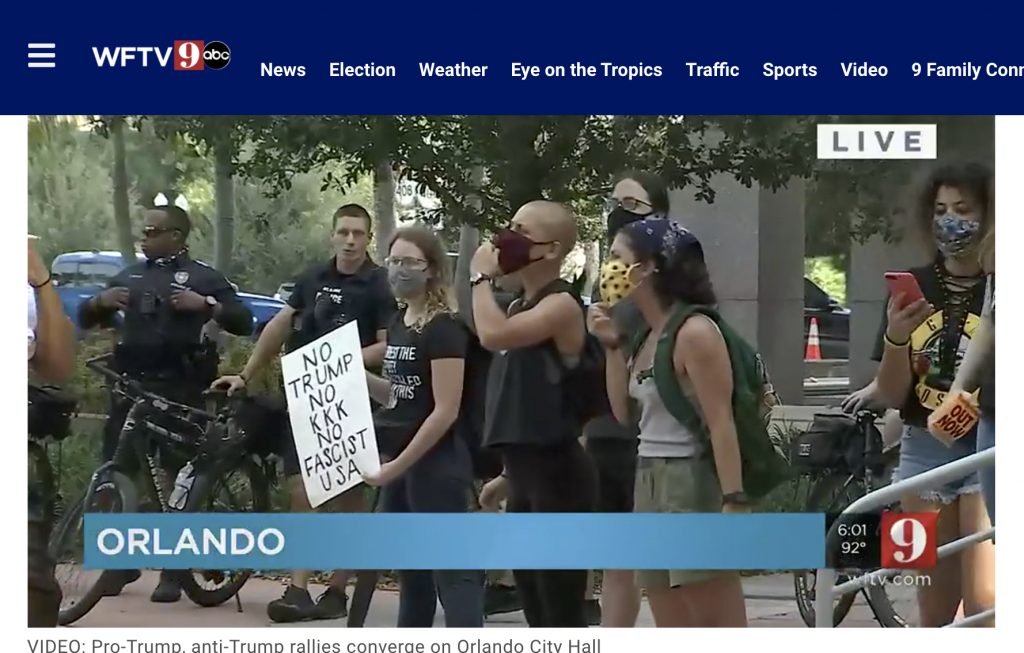 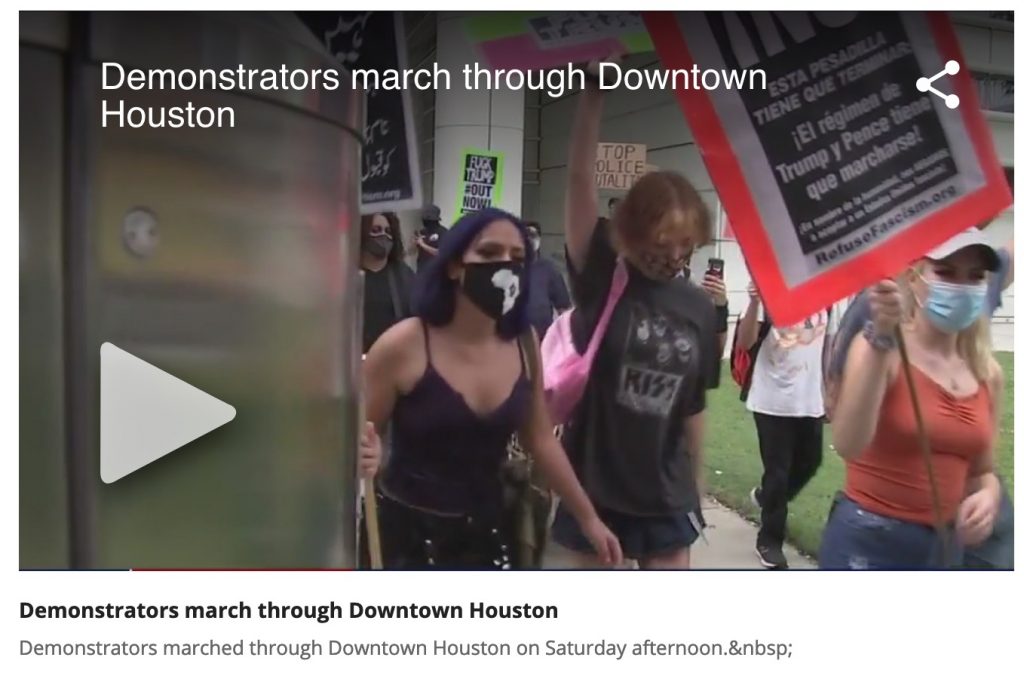 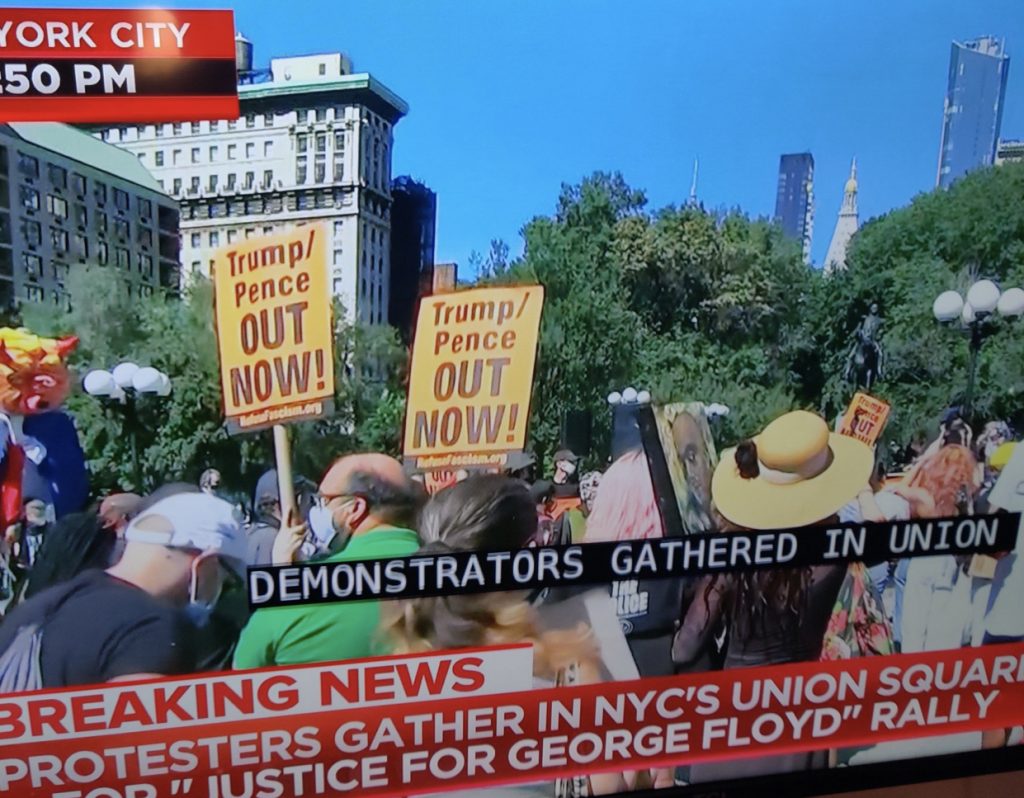