Refuse Fascism called for a March Against Death, Lies and Fascism, and For Humanity on September 21, with the demand: Trump/Pence Out Now!

Read the call for September 21

“October 3rd it begins! Trump/Pence Out Now Get in the streets – stay in the streets!” #COVID19
Find one near you https://t.co/cVmiL2ZaE9 #TrumpLied200KAmericansdied #Oct3Begins pic.twitter.com/UcXywJSFvO

Alex: arrested in brutal attack on anti-ICE protesters in NYC

Hearing from @alex_fermin_ who was arrested while protesting against ICE last week speaking on why we need to stay in the streets & fight not only fascism but colonialism, neoliberalism, & imperialism #OUTNOW #Oct3itbegins #COVID19 pic.twitter.com/65N96V4CDI

Pledging to stay in the streets, starting October 3: Trump / Pence OUT NOW!

Carl Dix: An overwhelming vote against Trump aint enough, WE have to say NO… and back that up with action

Sunsara Taylor:  We are declaring today that starting across this country Refuse Fascism is mobilizing people day after day in the streets demanding TRUMP/PENCE OUT NOW

We are marching today not just against the tragic death count, but against the regime that is responsible for this death.

We are declaring today, that starting Oct. 3, @RefuseFascism is mobilizing day after day protests to demand Trump/Pence out now!

Trump and Pence are Fascists, there’s no doubt, rise up! rise up! and drive them out

TRUMP & PENCE ARE FASCISTS! There’s no doubt! Rise Up! Rise Up! And drive them OUT! Marching against Death, Lies & Fascism with @RefuseFascismLA #TrumpPenceOutNow pic.twitter.com/m6I1b4PtAv

Rally and March in Chicago 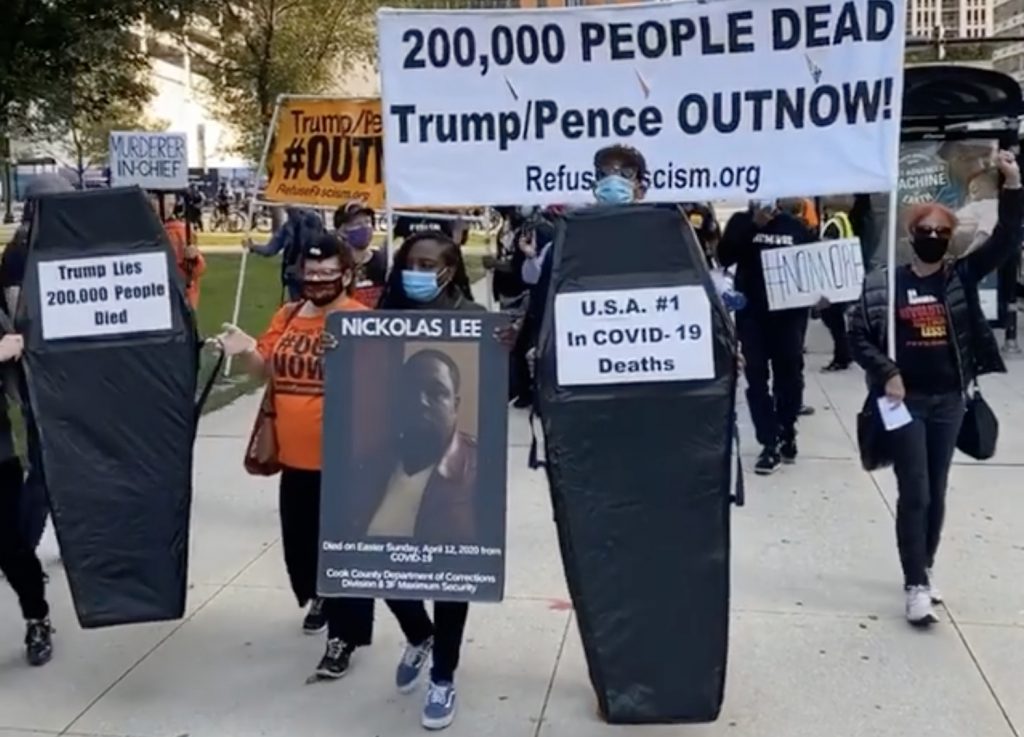 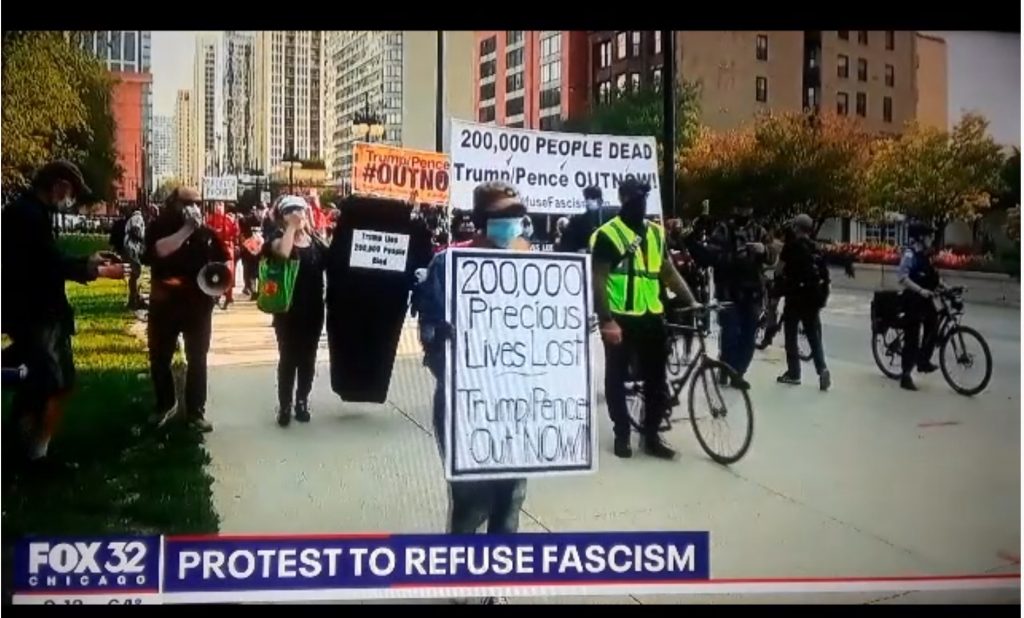 “Protesters are gathering at the Art Museum Monday evening to mark 200,000 deaths from COVID-19 in America. Organizers call it the March Against Death. The protests are being held in more than a dozen large cities nationwide. The group Refuse Fascism set up the marches. They are calling for President Donald Trump to be driven out of office.”

Jamaal speaking out about the severe threats issued by Trump’s DOJ against the encampment & against protesters nationwide.
Join us Sat. Sept 26 2pm Independence Mall for Mass Meeting to plan for daily protest beginning Oct 3 #TrumpPenceOutNow pic.twitter.com/usngh3jF8Q 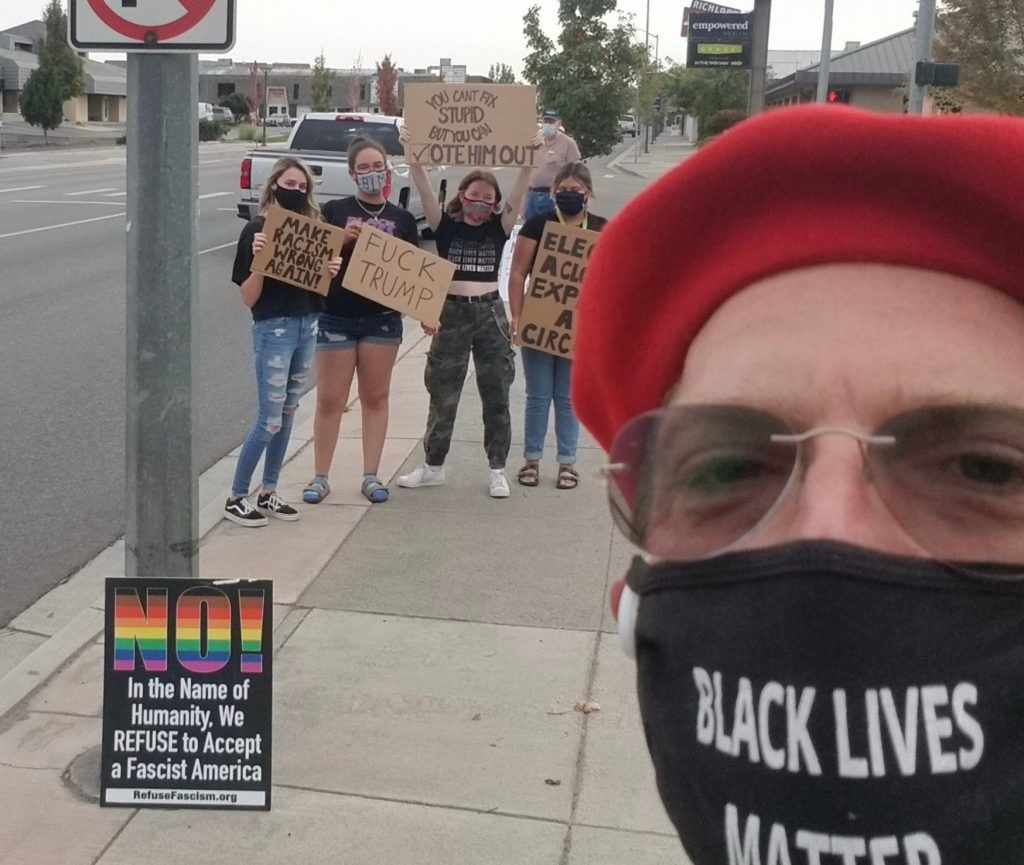 Demonstrators marched down Mission Street on Monday, from 24th Street to the Federal Building to mark the 200,000th death by Covid-19, which organizers say is due to the president’s disregard for science.

“The March Against Death, Lies, and Fascism, and For Humanity,” was organized by a collection of local activist groups including Resistance SF and Wall of Many. At least three dozen people participated, many of whom carried prop body bags, signs, or umbrellas marked with the names of those who died from causes related to Covid-19. …

Refuse Fascism’s national website, where the initial call to action was posted, also stated that this march would precede daily demonstrations in October beginning on Oct. 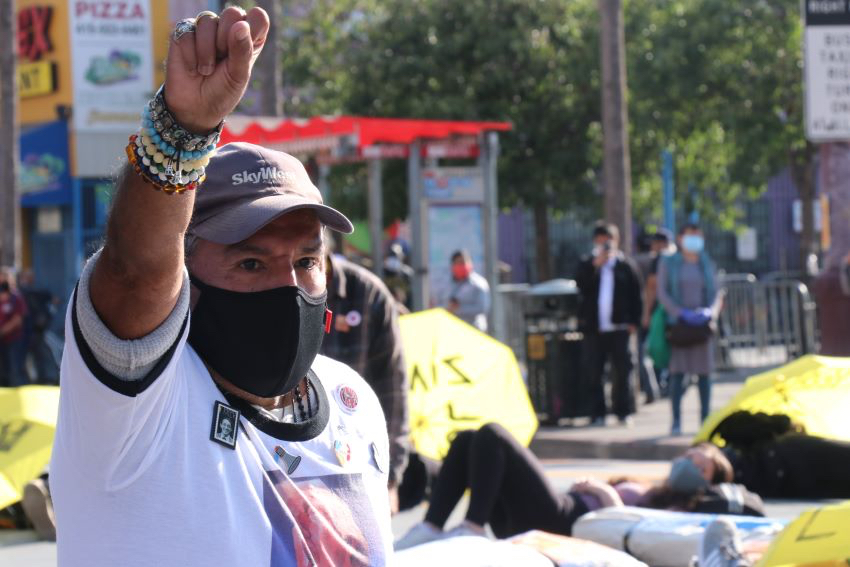 Seattle marching not just against the tragic 200K death count, but against the regime that is responsible for this death, FOR HUMANITY

Oct. 3 we begin day after day protests to demand #TrumpPenceOutNow! Will the future be fascist, or will we act? pic.twitter.com/1iNlUo4189 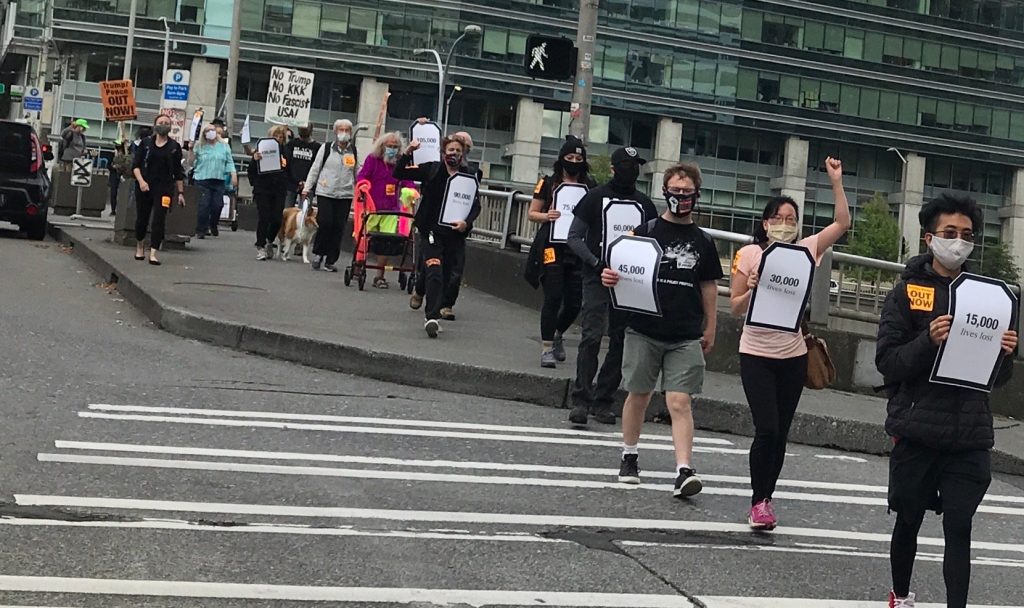 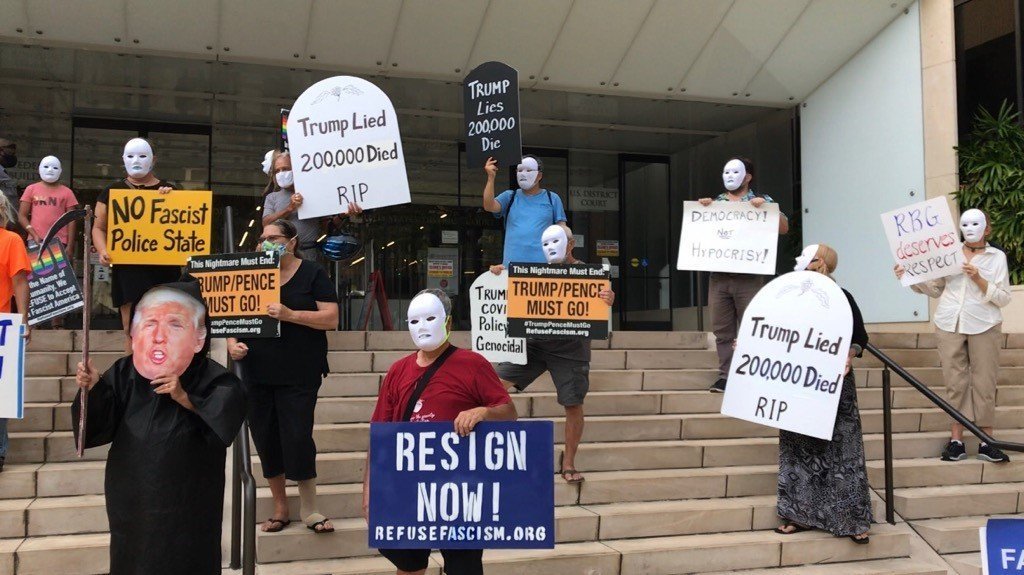 The Atlanta action took place outside the national Center for Disease Control (CDC). Local TV news covered the protest as part of coverage of the scandal over the CDC, bullied by the Trump/Pence regime, distorting and censoring science-based advice on preventing the spread of COVID. 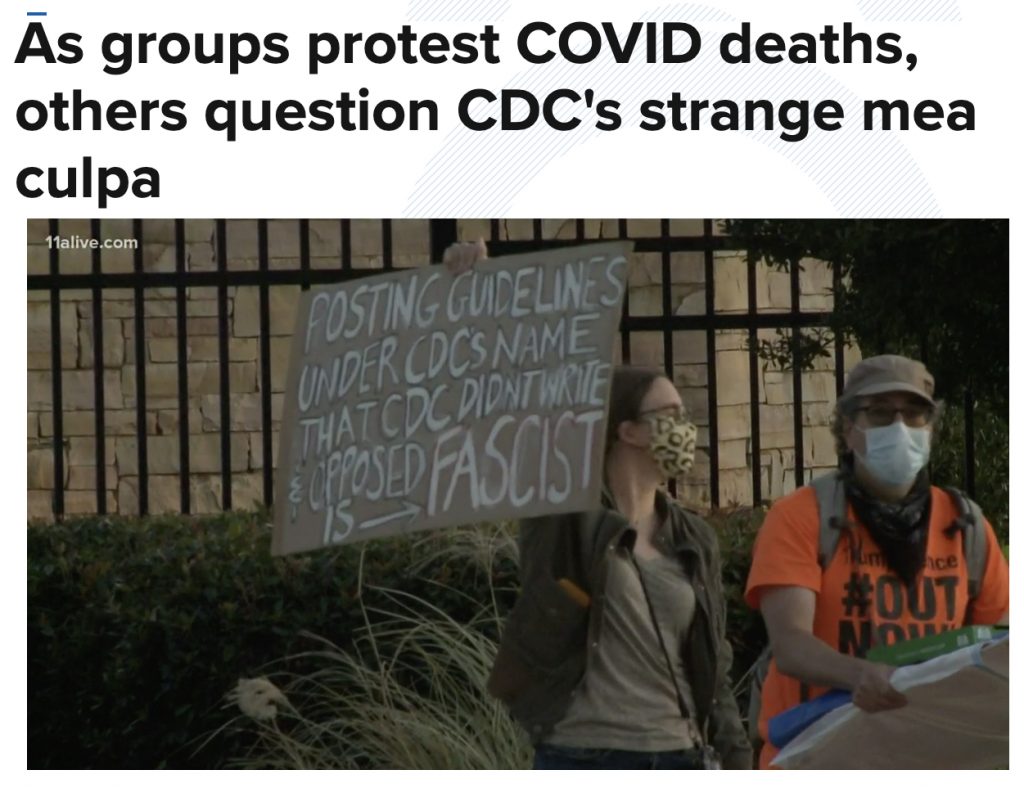 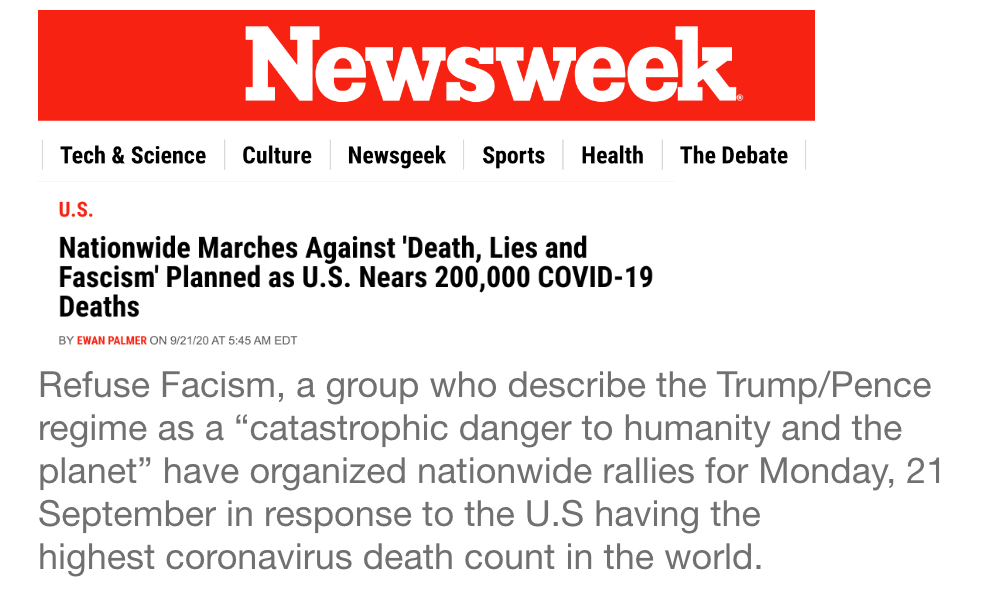 More than a dozen marches are due to take place at cities across the country in protest of President Donald Trump’s handling of the COVID-19 outbreak as the U.S. nears 200,000 deaths.

Refuse Facism, a group who describe the Trump/Pence regime as a “catastrophic danger to humanity and the planet” have organized nationwide rallies for Monday, 21 September in response to the U.S having the highest coronavirus death count in the world.

Coco Das, of the RefuseFascism.org Editorial Board, said: “Ruth Bader Ginsburg was a life-long stalwart fighter for the rights of women. She came to symbolize the hopes of so many who yearn for gender equality.

“Her passing intensifies the urgent need to get in the streets to drive out the Trump/Pence regime as we speed toward an election that is being stolen.

“Monday’s protests will include reflections on what her loss means, and an occasion to turn grief into organized opposition to a fascist court and a fascist America and getting organized for daily protests in October.” 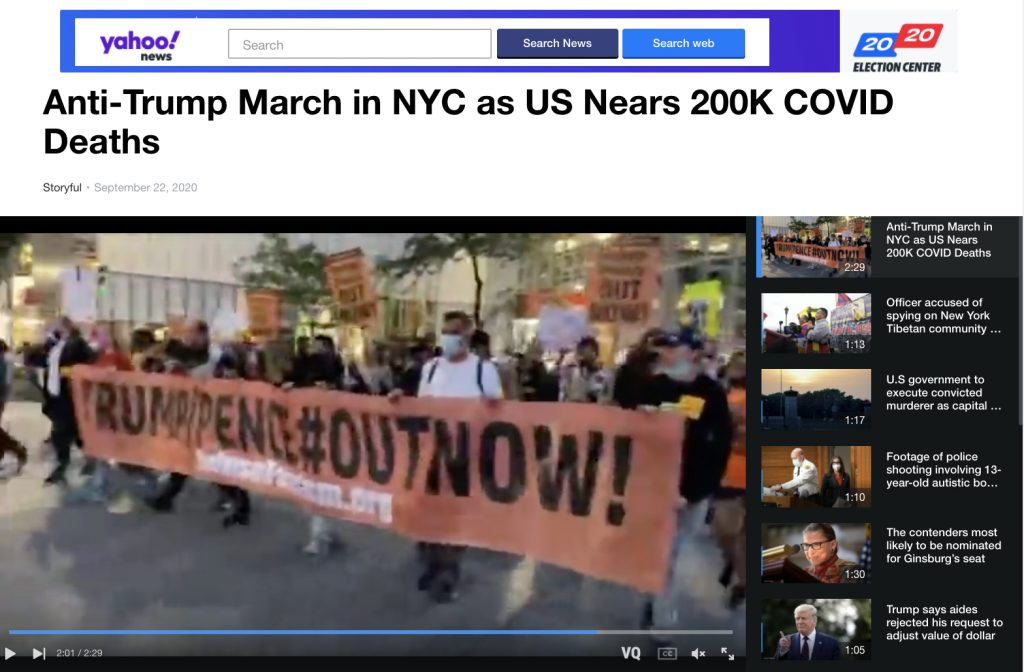