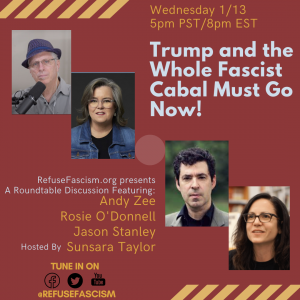 On January 6, the world witnessed with shock: MAGA mobs storming the U.S. Capitol, climbing the walls, smashing windows, rampaging through the halls and looting Congressional offices—called forth and unleashed by Donald Trump, who could be called the wannabe second president of the Confederacy. Even AFTER this violent siege, 8 GOP senators and 139 representatives (that’s 2/3 of the Republifascists in the House of Representatives) still voted to overturn the election. A new poll yesterday showed that 77% of Republicans still support Trump.

This was an attempted fascist coup and it was years in the making.

That is the word: Fascism. What is that? It’s vigilantes shooting Black Lives Matter protesters. It’s open white supremacy. It’s refugees in concentration camps. It’s paramilitary forces using violence to suppress dissent. It is lie upon lie such that the very concept of what is real and what is true is destroyed. It is outright theocrats dominating the courts. It is the brazen open attempt to overturn the election of Biden – it is shredding even the pretense of democracy.

Now, Trump MUST GO! The fascists are still rampaging at Statehouses around the country. They are bragging about their accomplishments, threatening further mayhem, and are already making their assault on January 6 a rallying cry to come back. Trump, for his part, is upholding his “stormtroopers” and is reportedly even more bellicose and unhinged. Every day Trump remains in power he poses a catastrophic danger to humanity.

What is more, he must be decisively repudiated – impeached and convicted – which would mean he could never come back to elected office. Even more important, this would be a real setback to the fascist movement he still leads.

This fascist movement is not going away even with Trump removed. There are tens of millions of people, who have been led, organized and shaped in a fascist direction, with their own media and schools and institutions, for over 40 years, to view themselves as the “real America.” There are elected officials at all levels of government who view and will act as if the Biden administration is illegitimate and they now have an armed street-fighting force “on call” filled with revenge. Inside and outside the halls of power they will continue to fight for their white supremacist, xenophobic, and patriarchal program.

And, they will continue to undermine the very concept of truth – leaving tens of millions to be susceptible to the calls of demagogues and the vilest conspiracy theories. If the millions of people who desire a just world, who care about humanity, fail to organize and pledge to not allow a fascist America, it will not appease these fascists; it will leave them a clear field to advance. We saw on January 6 where this leads.

This is the moment – as calls ricochet through Congress to remove Trump – to find the ways and means to demand the removal from power now of Trump and the whole fascist cabal, from Pence to the Senators and Representatives in Congress, to fascist legislators who called for the coup in the 50 states!

The road to Wednesday’s fascist coup attempt was paved by a refusal to hold Trump and his fascists accountable …again and again over four years. Not after Charlottesville. Not after children locked in cages. Not after Trump’s acquittal in a weakly pursued impeachment on very narrow grounds which only cemented Trump’s belief that he was above the law.

We demand Trump’s immediate removal to stop the tremendous harm he can do between now and January 20th. We demand this now as part of building the strength of our side for the fight to decisively defeat this fascism that has been allowed to fester and spew forth. Note well: A failed coup, can lead to a successful coup or a “legitimate” return to power fueled by the same fascist program but with a vengeance.

The struggle for the future is far from over. We must continue to speak and act and call forth others. Our just and necessary demand that Trump be removed from power now must be met, not just for ourselves, but for humanity.

Out with the Whole Fascist Cabal!