When you post reviews of the Refuse Fascism podcast, you help sound the alarm that fascism continues to pose an existential threat to humanity. You help build the community of people engaging with a serious, reality-based understanding of the nature and danger of fascism. You help people see their responsibility to refuse to accept a fascist America. And you are building networks that will be proactive and resist the continuing danger of fascism.

Note: The most influential platform to post reviews and ratings to is Apple:

Here are some examples of short reviews: 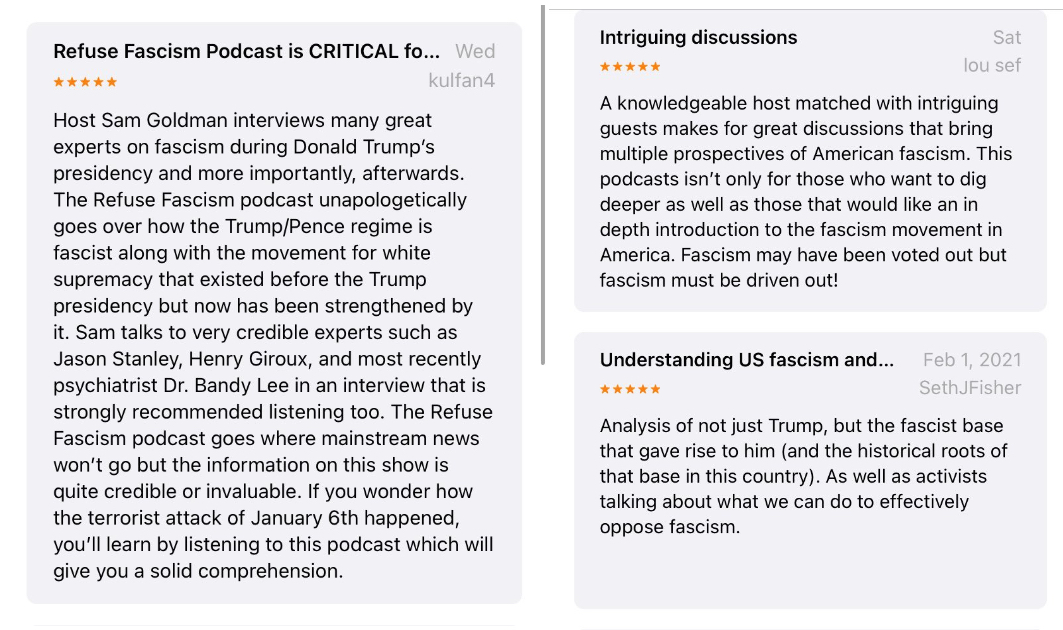 And, a longer review:

Listening to the brilliant and accomplished Dr. Lee speak about the pathology of T-rump and his followers reminded me of the situations of children of addicts/ dysfunctional families. The similarities are that we the people don’t know what to expect, those who are supposed to help us don’t, and there are scientifically proven solutions.

Experts like Dr. Lee, Sam Goldman, and others knowledgeable about fascism were able to foresee events like the rollbacks of environmental legislation, kids in cages (xenophobia), the hundreds of lies, attacks on the media, science, and education, strengthening the military, January 6th and more. However, most of the population found ourselves flabbergasted as each outrage superseded the next, until the majority became stunned into silence; only able to focus on survival (the pandemic didn’t help) and prayer. The parallels to Hitler/Gilead and millions of pathological gun-toting followers only boggled the mind further. Like children of addicts, people shut down. As Dr. Lee said, T-rump’s mental unfitness combined with his criminal intent to worsen the untenable situation. Narcissists’ irrational behavior damages our whole system (democracy), including the power and will of the victims to react.

In fact, even the ones whose duty it is to protect us, like the mother when the father is abusive, are paralyzed. In this case, it was the Democrats who capitulated again and again. Denial and inaction are tactics used by some lazy gatekeepers who should be solving the problem. In an abusive situation, doctors, neighbors, and teachers often suspect that things are not right, but downplay the trauma. Even Republicans who spoke out against T-rump’s behavior were silenced before they could take action. In this case, we the people suffered gaslighting, our hopes of rescue were dashed by the results of the Mueller Report, and real solutions were rebuffed.

So what is our recourse? First of all, the people should have taken to the streets and stayed. In many other countries, fascism has been turned around by a massive uprising. After the Women’s March, everyone went home. The police and everyone knew these were one-day things; it was on a weekend, thus not very disruptive of the status quo. We needed the courage to change, with “behavioral management” as Lee suggested. She went on to say “broader and wider cultural and sociological factors” needed to be considered. We don’t just need to convict T-rump and Pence, though we voted them out, but we need to find our commonalities as workers. We must make a decision to go forward with conviction to fundamentally change this country’s priorities. I think “the happiest country in the world” Norway offers us a role model for our economy and our attitude. I recommend reading George Lakey for guidance on imagining and getting the world we want. https://wagingnonviolence.org/2021/02/envision-or-perish-why-we-must-start-imagining-the-world-we-want/